We often hear it claimed t 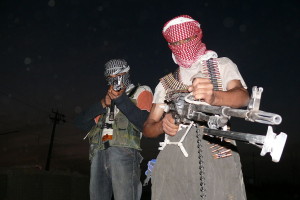 hat it is because of the West’s intervention in the Middle East that terrorism and instability has escalated, and that West’s intervention has fueled a general hatred towards Western culture. One of the main reasons I don’t accept this particular line which is trawled out by certain politicians and media outlets on a daily basis is because it is frankly racist, and reinforces the worst of colonialism.

Underlying this belief is the presumption that non-Western people cannot be held to the same level of accountability for their actions as Western people can. Like children, non-Westerners are unable to bear ‘adult responsibility’ which can only carried by the strong and moral shoulders of well educated, middle class white people.

These well educated, middle class white people overestimate their importance in this particular regard, but what they should carry on their broad shoulders is the responsibility for the increase in home grown sympathisers and the number of ‘converts’ to Islamic terrorism whom we have seen emerging from Australia and Canada.

Australia and Canada are perhaps the most multicultural nations in the world, and for the last couple of generations, successive governments at all levels have sought to celebrate diversity and to foster a culture of inclusivity. Both countries are amongst the world’s wealthiest nations with some of the best opportunities for education and employment. And both countries also have generous social welfare programs to provide for the needs of life if someone is unable to work, or should someone simply choose not to.

You might think that having amongst the highest life expectancies, lowest infant mortalities, and richest qualities of life would be a cause for celebration. Apparently, these and the many other achievements of the West are not. The three overarching themes in Australia’s National School Curriculum are ‘Australia’s place in Asia’, ‘Indigenous Australia’ and ‘Sustainability’. Ignoring for a moment that these themes are silent on the learning of basic literacy and numeracy (surely the foundation of just about all education), the lack of any focus on Australia’s legacy and place in Western culture is quite remarkable. In fact, the three themes in Australia’s National Curriculum arguably undermine any possibility of celebrating Australia’s Western culture, let alone the teaching of it, with the notable exception of where Australian culture is regarded as threatening to one of the three overarching themes. Then the children will hear a lot about the West, and will be taught to become extremely cognisant and contrite for its manifold sins.

When our educators and media refuse to impart Australia’s Western culture, preach a boring and futile cultural relativism, and then when Australian culture is identified, it is only to be condemned on the grounds of some kind of ‘ism’, it is not surprising that radical and violent ideologies that make bold and exclusive claims of truth, meaning and purpose become so appealing to the young.

Well educated, middle class white people: you (and your countrymen) are not to blame for the terrorist uprisings in the Middle East. But you are to blame for those who have turned to these violent ideologies at home. You have denied and shamed our culture and refused to impart it to them. You have denied children of their own identity, and the possibility of being a member of a truly meaningful and cohesive culture and society. You have given hungry children stones to eat instead of bread. Most just starve, but some prowl around like hungry lions, looking for something or someone to devour. Well educated, middle class white people: it is you who are responsible for creating and grooming hate and treachery in our midst.