Waleed Aly is in the news this week for allegedly being consulted by the AFL in relation to potential “rules changes”. Warnie has a good take. 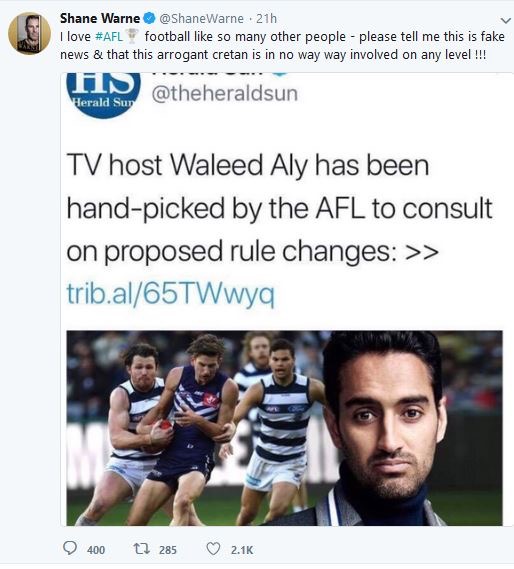 Waleed’s explanation is that he wasn’t consulted by them per se, just that he had asked about the rule changes and was told that:

“..absolutely can’t tell you that’.

“She then said, ‘If you want, I can get you to a briefing and you can see what they’re looking at, the analysis behind it, that sort of thing’.

“I responded, ‘that would be amazing, but I don’t want to impose’. She said, ‘I’ll send Steve Hocking an email.’

“The offer came, they said ‘ok they’d be happy to sit down with you and brief you on the research they’ve done’.

Oh, thank god! I was worried this was a scandal. Rather than being consulted on rules changes, he was just being given special access to AFL HQ.

But why Waleed I wonder? Waleed says it was only because of his friendship with Nicole Livingstone that he got the access, but were any of Nicole’s other friends present at this briefing?

My prediction is that Waleed will be appointed to the board of the AFL soon, and that this briefing and other involvements of Waleed in AFL corporate are designed to lubricate the minds of AFL fans as to the impending directorship. Recall if you will, Waleed’s presence on the ABC’s insiders on the subject of Adam Goodes:

Or his recent character witness support of Bachar Houli.

Waleed and the AFL are a match made in modern Australian heaven!

It’s needless to say that one’s view of Waleed Aly is an Australian political litmus test. If I ask you whether you like Waleed’s style and positions, your answer will allow me to determine whether you are Left or Right wing. I believe this theorised eventual move into the leadership at AFL HQ is part of a continuation of the Left’s initially covert, but now overt march through the institutions. This is no conspiracy theory, the AFL was one of the first non-political bodies in Australia to weigh in on the gay marriage debate. 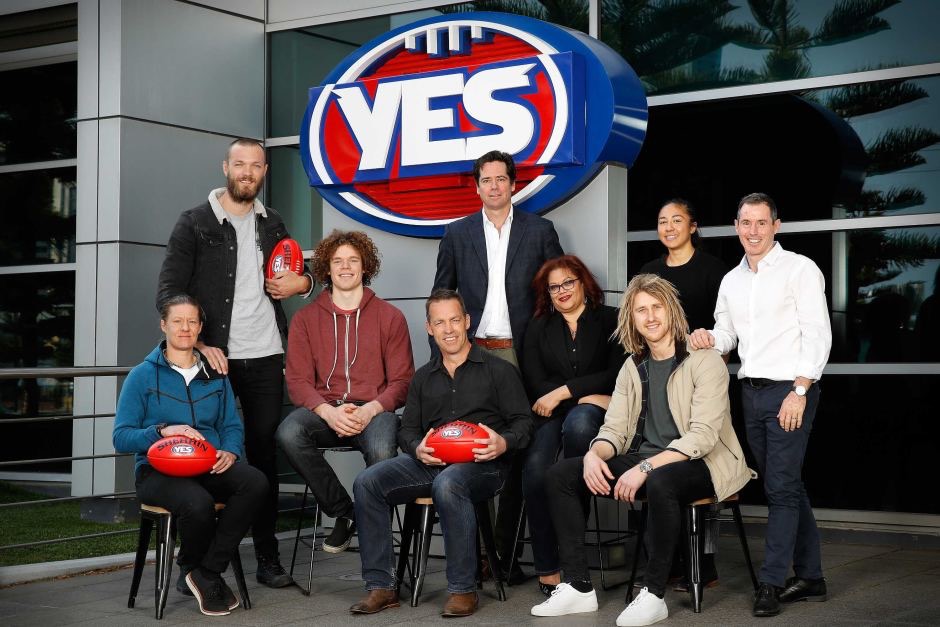 This is how the Left wins. They consciously ensure that all cultural influencers are reading from the same page. This is why the work of XYZ is so crucial in providing a voice and rally point for Right wingers who have found that their once non-political institutions are now thoroughly compromised.

Personally, I am not too interested in Waleed’s view on AFL rules, as he has the same standing as any fan in my opinion. I am however interested in his modern Leftism and how he reconciles that with his faith.

TONY JONES: Is homosexuality a sin in Islam?

WALEED ALY: I’ll get to that. The thing I want to say – no, no. But there’s an important distinction here and I get often frustrated with this discourse of lumping the Islamic tradition in with the Christian tradition, particularly the Catholic tradition, because they’re structurally so fundamentally different. The Catholic tradition has a church which has a kind of divine imprimatur and authority. The Islamic tradition is a far more anarchic tradition in a sense. There is no centralised authority, especially in the Sunni tradition. So to say the Islamic teaching on anything is X is a position that immediately becomes contestable. You can try to verify it statistically or otherwise but the point is that, at the very least in theory, if not in practice, any position that you take is a position that you take that may or may not – that may be fallible and is open to being contested by other Islamic theologians or other Muslims and so on. So on any question, whether it be homosexuality or it be anything, you will find a position that the majority take. And on the question of homosexuality, undoubtedly, if you took a poll in the Muslim world, you would find that most people would consider it sinful behaviour. But if you took …

CHRISTOPHER HITCHENS: Dodging it. It’s not what Muslims think, it’s what Islam teaches we asked you about.