Jeff Kennett has thrown in his lot with the ranks of the globalist left and argued in favour of changing the date of Australia Day.

He opens with an emotional manipulation:

“The tragedy of four young indigenous 15 years and younger girls taking their lives touched us all.

“It was in part the failure of the non-indigenous community to both give our First Peoples the recognition they deserve and to address the serious social issues in so many of their communities.”

If you don’t want to #ChangeTheDate, you killed those girls.

The left always use a victim to embody their agenda. Thus if you oppose their agenda, you are presented as opposing their championed victim, and you are demonised mercilessly. In Europe, Alan Kurdi was the victim used to open the floodgates:

In America, the left tried to use the bad single mother and her kids as the new Alan Kurdi:

Until the shot was thoroughly discredited:

Mention of the girls’ suicide in the very first sentence is an immediate signal that Jeff Kennett is being intellectually dishonest.

“Last week I said that in order to build trust and respect inside all communities within Australia — in particular between our First Peoples and the rest of us — there needs to be some meaningful give and take by all.”

“In that spirit I wish to suggest we change the date on which we celebrate Australia Day.”

Naturally, he offers a chance at atonement. Give up your reverence for the arrival of the First Fleet to assuage your white guilt, and you can hold on to the so-called “white privilege” the globalists have convinced you that you have, for a little while longer.

This tactic is used throughout:

“So, as we approach Australia Day, in the spirit in genuinely starting to build trust and give our First Peoples the priority they deserve, I suggest we find another date.”

This line late in the piece is interesting, as he lauds the KRudd apology earlier in the piece:

“We cannot change what occurred in previous decades and the groundbreaking Rudd apology, while welcome, did not change attitudes. It did not lead to a greater priority for the indigenous community.”

Yet those same vacuous plaudits about “building trust” and giving aborigines “the priority they deserve” are the same vacuous plaudits that were used to justify the apology, and the same line will be taken the next time we are apparently required to give away a part of ourselves. Kennett later conveniently rules out changing the date to ANZAC Day. But ANZAC Day will be the next target in the globalist left’s sights once Australia Day is gone.

Bizarrely, Kennett argues that he is not a lefty:

“I am not suggesting we change the date in a bid to win popularity with sections of the community, nor am I embracing a Leftish view; I am doing it to start a process of recognition and lift it in a meaningful way to a positive outcome.”

This does not make any sense, and is another smokescreen.  Jeff Kennett is an example of how the Government-Corporate Complex and the crazy SJW left have coalesced around the same interests.  The former are happy to support mass migration and the undermining of European heritage because it makes them money, the latter because it brings them power. Jeff Kennett used to be a hero of mine when the left hated him like they currently hate Donald Trump.  Now he is just another cuck.

Kennett argues that Australia is “not serious” about Australia Day because this year we get a public holiday the following Monday to make up for the fact that January 26 falls on the weekend. By the same logic we should #ChangeTheDate of New Year’s Day, given we got a day in lieu at the start of 2017 for the very same reason. This argument is so weak, it could very well be a white elephant, particularly given his proposal for the new Australia Day:

“January 1 was the date in 1901 on which the Commonwealth of Australia came into being and I believe that is an appropriate date for our national day.

“January 1 is, of course, New Year’s Day, so why not give it extra meaning by celebrating Australia on the first day of each new year? It makes sense to me, Resolutions are made, hopes are high, dreams are daring.”

Here’s the thing about January 1:

The Commonwealth of Australia came into being primarily to secure the existence of our people and a future for white children. The very first Act of Parliament was to pass the White Australia Policy into law by way of the Immigration Restriction Act of 1901, which allowed for the denial of entry and even the removal of “prohibited immigrants”.  Furthermore, our Constitution forbids our elected representatives from allowing mass immigration:

119. Protection of States from invasion and violence

The Commonwealth shall protect every State against invasion and, on the application of the Executive Government of the State, against domestic violence.

Mass immigration is invasion.  Our founding fathers understood this. 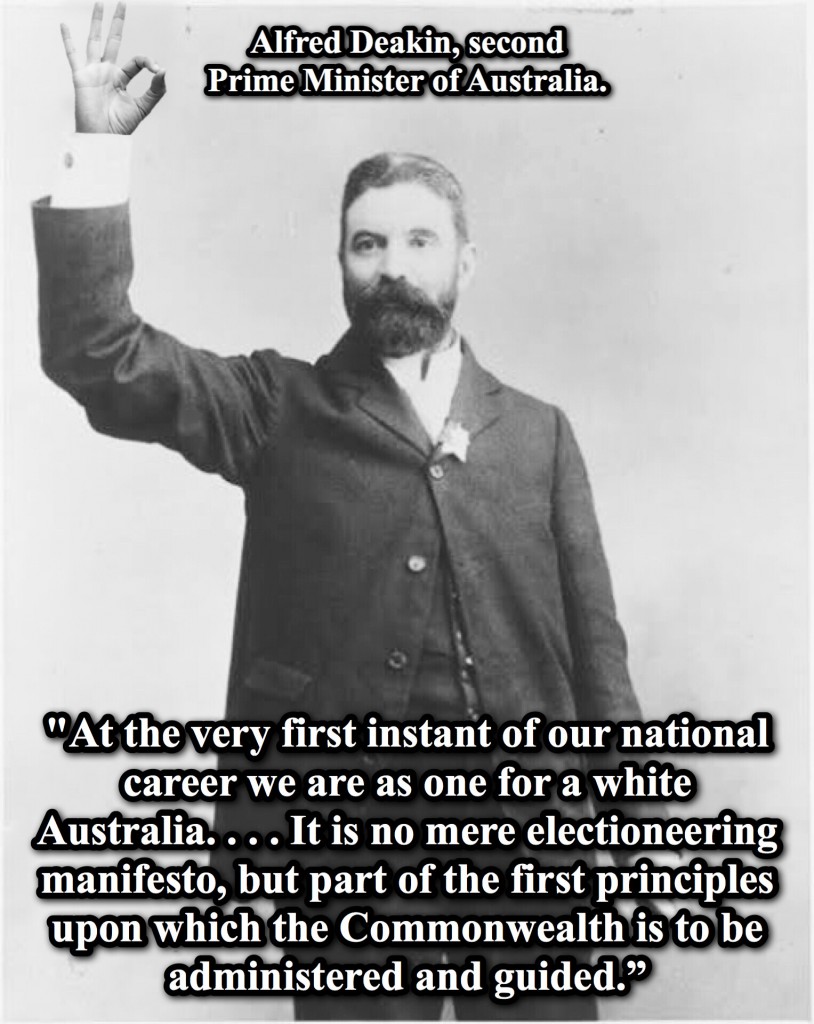 Mass third world immigration is unconstitutional, and our leaders are traitors.

Rest assured, if the left destroy January 26, they will renew the attack on Australia Day, once they have destroyed a few more icons in their incremental yet inexorable war to dismantle everything in this country which serves as a reminder of our British origin, for the very reasons I have given here.

The globalist left want to end Australia, and they want all white people dead.