In bad times, you find out who your friends are. And your enemies.

A brief summary of who is responding to the tragic Notre Dame fire with ‘smiley faces’ on Facebook. Appalling. pic.twitter.com/OBANPl9Wpv

This is just a sample of comments in response to the Notre Dame fire posted at France 24 Arabic.

Instead of denouncing this vile rhetoric, BuzzFeed is claiming I made it up.

This is why you suck. This is why no one trusts you, pic.twitter.com/tCcuhW7jlg

If you look at the ratio of laugh emojis to overall reacts in the first tweet, however, it’s about 4% of responses. That’s hardly a savage horde of hate, especially considering that our governments have been invading and bombing and sanctioning and misrepresenting Middle Eastern people ever since Israel did 9/11.

These people are destroying our civilisation, though, even if they don’t want to. War can bring suffering and occupation, but only demographic replacement can destroy civilisations. And that’s what we’re experiencing in every formerly European country in the world today.

While we were busy cutting off our kids’ genitals to make boys girls and girls boys and opening our borders to achieve the globohomo utopia of diversity and tolerance, Mohammed’s fanatical vanguard were waiting. They know that time is on their side, demographically and economically. They have been provoked by Zionist expansionism in the Middle East and emboldened by cultural Marxist weakening of our identity and social cohesion in the West. They know that the vicious claws of Big Sister will come out for any nasty bad white man who hurts the feelings of Allah’s Umma.

They are also motivated by an eschatological vision of end times global conquest, when the Dar al-Harb (House of War) will become the Dar al-Islam (House of Submission) under the glorious rule of the Caliphate.

This is an existential threat to the West and to our way of life, and must be addressed. I’ve been warning about it for years. I even wrote a book about it. 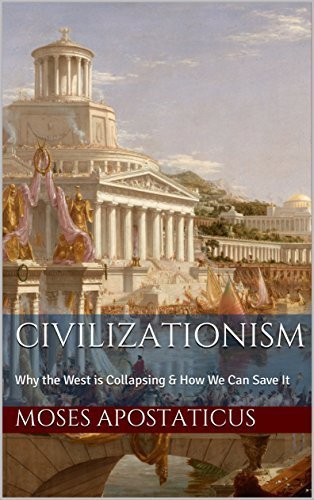 But we don’t need a war of extermination against these people. It will only destroy us and them. We just need a government which actually responds to the will of the people and not parasitic, inner-urban sophisticates for the first time in 50 years.

115,000 migrants arrived in Australia in ONE month alone.

This is absolute insanity.

When will the people be given the chance to directly vote on immigration in a referendum?

I think the mainstream political parties would fear the outcome.

But the Muslims weren’t the only ones who greeted the news of the Notre Dame fire with delight and derision. Even schadenfreude. 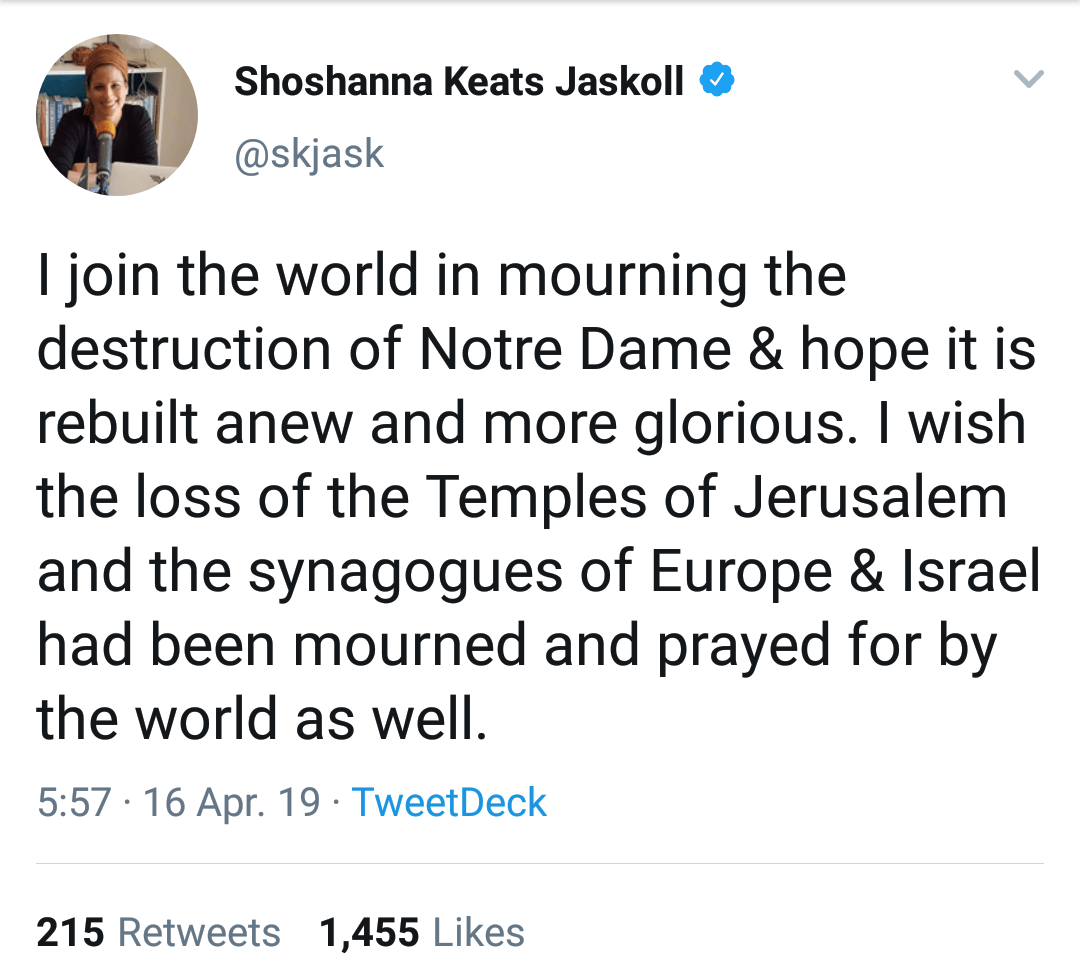 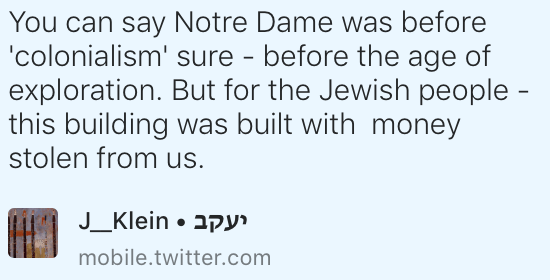 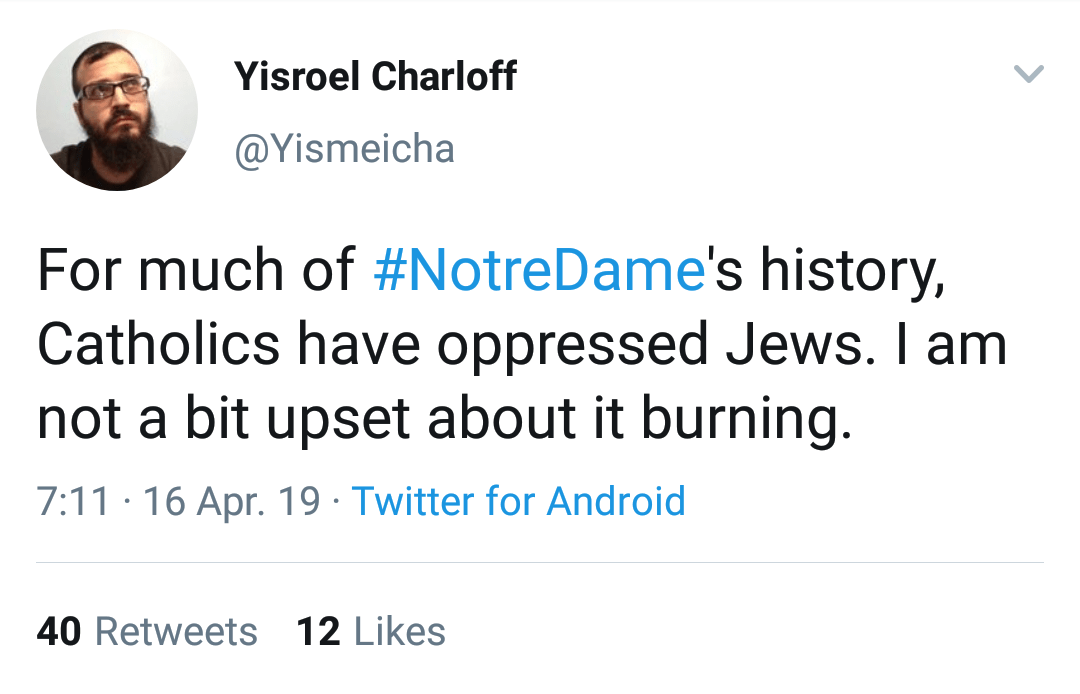 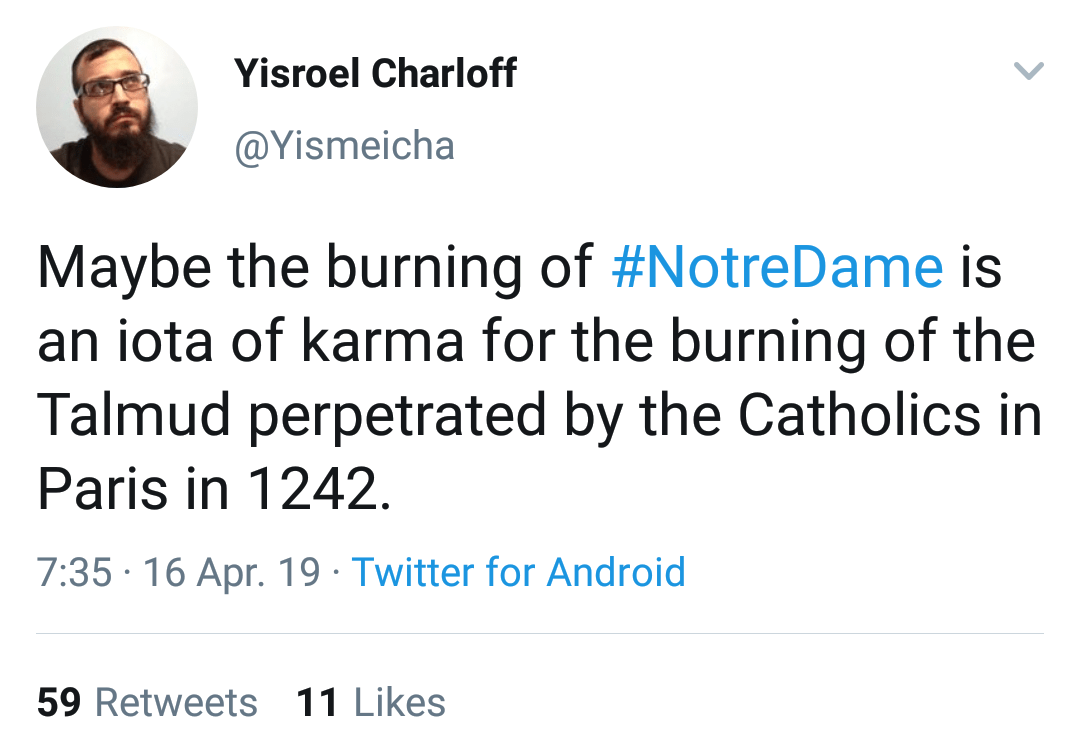 “The building was so overburdened with meaning that its burning feels like an act of liberation.” We talked to architects and historians about the significance of Notre Dame — and what should happen next https://t.co/0tulGIjwMA pic.twitter.com/pNll70pJfF

The writer of the Rolling Stone piece is EJ Dickson. 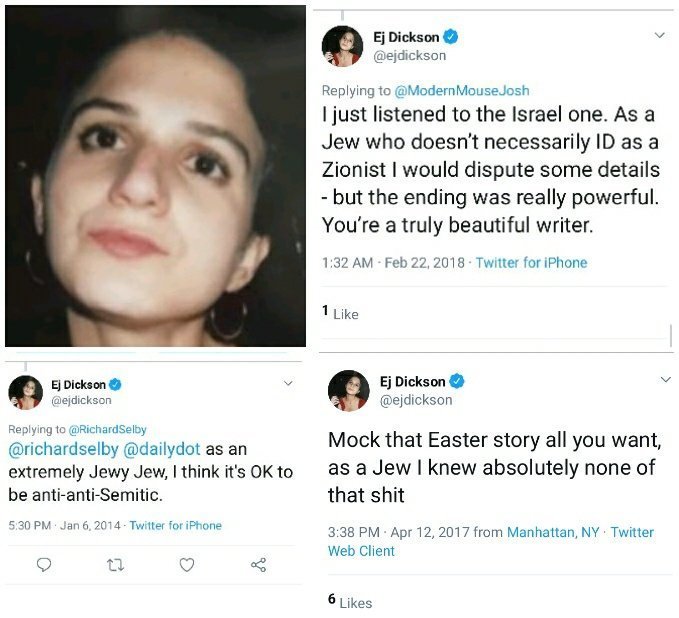 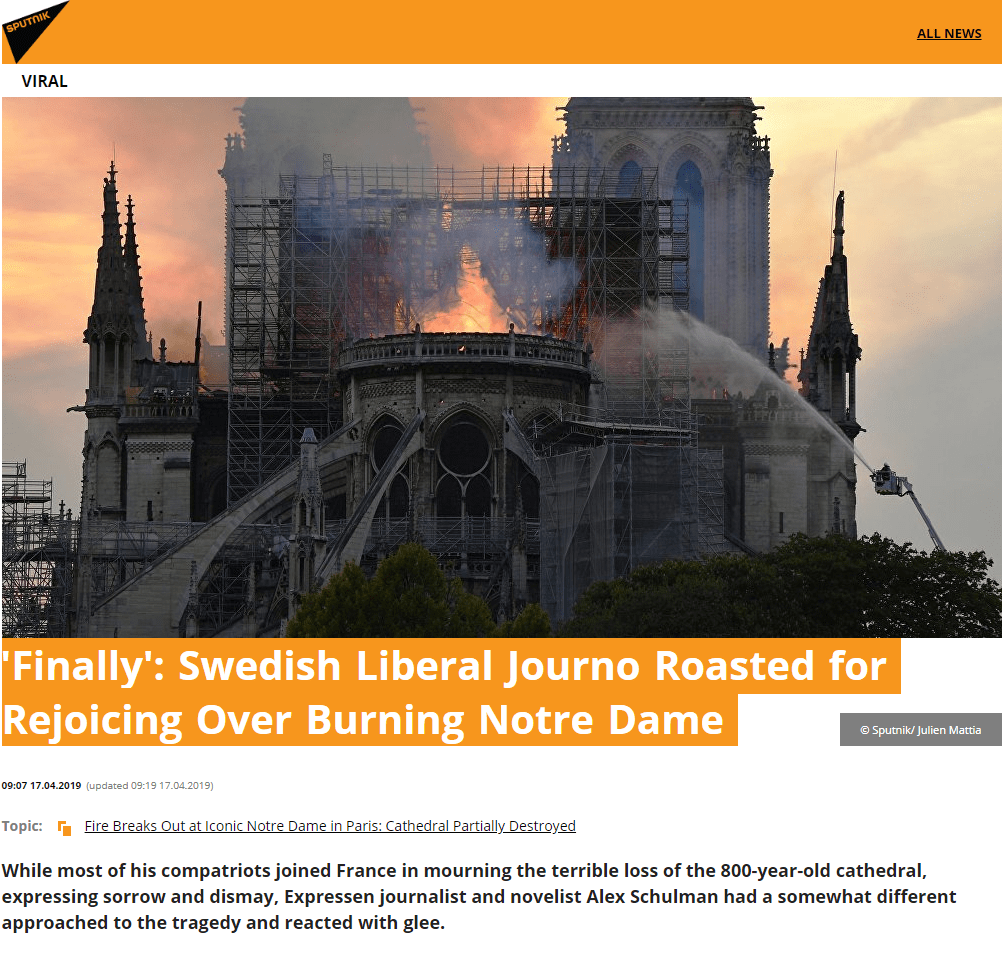 The journalist who celebrated the fire, Alex Schulman, isn’t a desperately poor Muslim from some desert hellhole. He’s Jewish, and from one of the most famous media families in Sweden.

I think I’m having a stereotypically Jewish reaction to Notre Dame burning. Like it’s burning and it’s not systematic persecution? Not bad! Put that thing out and repair it, you’ll be fine.

Me: dad Notre Dame burnt down last night
Dad: wheres that *he knows where it is*
Me: the old cathedral in France
Dad: ok and?
Me: Its 800 years old
Dad: 800 years of catholic bastardry

Don’t worry Christians, you can manage without a temple. Exile is going to be ok ❤️

And in their glee, they reveal their hatred of Christianity.

I do not care for Notre Dame: this is where out Holy books were burnt, volumes of Talmud, Codes of Jewish Law, Commentary and more… Retribution has come late, but it has come. https://t.co/U8P5U66yTH 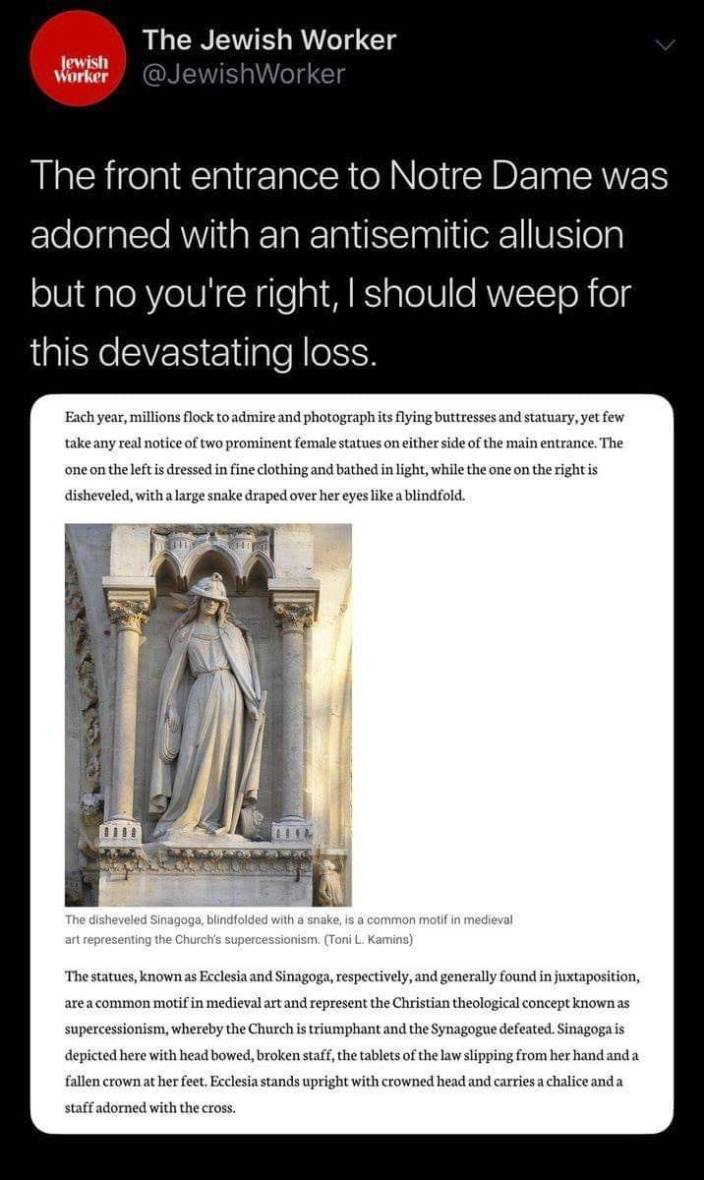 I mean this is tragic and I have visited Notre Dame, but there is nothing more French tha fetishizing your own culture to the point that you let your police round up Jewish children from school to deport them to death camps.

Notre Dame Cathedral was built so boys would have pretty things to look at while their religious leaders fucked their assholes. Those beautiful ceilings were the set dressing for the nightmares of innocents. I’m glad Jews and Muslims finally teamed up to burn that rape hut down.

Ben Shapiro tried joining in with his synagogue buddies on the laughs, but quickly realised it was probably too soon to reveal his real attitude to the tragedy and deleted his tweet. 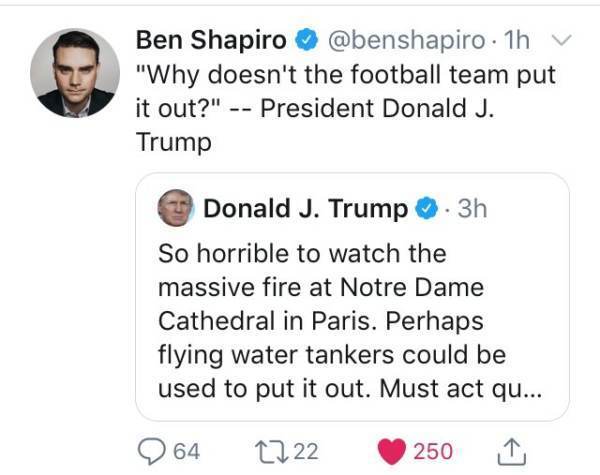 Shapiro followed up, however, with a series of tweets lamenting the loss of a monument to ‘Judeo-Christian civilisation’, and then his kosher compadres flipped their kippahs.

It is. And that is why it is a central monument to Western civilization, which was built on the Judeo-Christian heritage. https://t.co/cS9oFzNz1P

Leading Israeli newspaper Haaretz was having none of it. 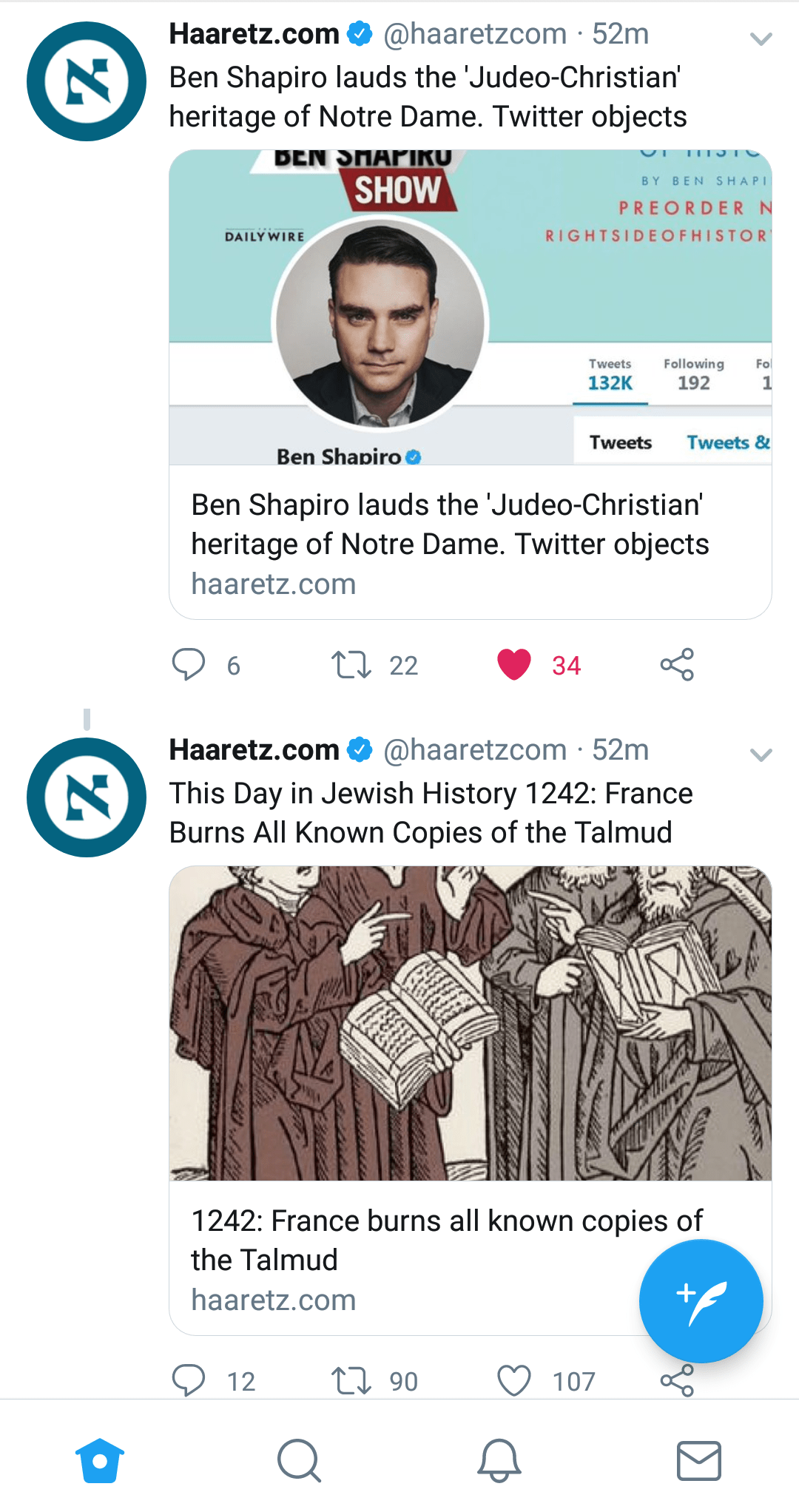 Even Bill Kristol, son of the former Trotskyite and founder of neoconservatism Irving Kristol, was not amused.

The terms “uphold” and “re-familiarizing” are doing a lot of ambiguous work here. The plain fact is that one can respect the beauty and profundity of Notre Dame while choosing not to accept its religious principles (the vanquished synagoga?) or any variant of its “philosophy.” https://t.co/KMLuhnNs5C

Shapiro has pushed the meme of a ‘Judeo-Christian civilisation’ about as far as it can go before it snaps, and the Jews themselves disavow it. Kristol, along with the other neocons of the Bush era like Paul Wolfowitz, Elliot Abrams, John Bolton, Richard Perle and David Frum, masterminded the US ‘war on terror’ after 9/11 and helped ensure the Zionist takeover of US foreign policy over the last 20 years. All of those names, except Bolton, are Jewish.

Even he thinks Shapiro is pushing the ‘you are us and we are you, let’s fight the Muslims together’ shtick too far.

So why would so many prominent Jews, even Zionist Jews, disavow any concept of the ‘Judeo-Christian West’ and its monuments, such as Notre Dame? Why would they not want to be associated with such a splendid tradition, if we all worship the same God, after all?

Besides the obvious obsession with ‘anti-Semitism’, the lack of a shared religious origin for Judaism and Christianity leads Jews to reject any concept of Judeo-Christianity. Despite what most ill-informed Christians and even atheists in the West think, Judaism as it is practiced today is not based on the Torah. It is based on the Talmud. Different books, different gods, totally different belief systems.

This is relevant to the topic of Notre Dame. Shortly after completion of the cathedral, in 1240, a Christian convert from Judaism exposed the teachings of the Talmud to the French court, and this led to the Disputation of Paris, also known as the Trial of the Talmud. The outcome of the trial was the burning of 10000 Jewish texts, and while we’ve forgotten about it, the Jews haven’t.

As the medieval French discovered, and as many in the West still don’t understand today, there are two Judaisms. Torah Judaism is what most people in the West today believe the religion is; basically, the Old Testament of the Bible. The Jews themselves consider it the ‘written law’ of Moses. Unfortunately, this form of Judaism has almost completely died out over the centuries. I suspect many Torah-adherent Jews found the true Messiah, became Christians and disappeared from Jewish history. We know that many Jews got saved during the first four decades after Christ and before the destruction of the Temple in 70AD. Many of Paul’s letters were dealing with getting them to understand the finished work of the cross.

The second form of Judaism is based on the Babylonian Talmud. As I have written before, this ‘oral law of the rabbis’ was present during Jesus’ ministry, and he railed against it. When he called the Pharisees sons of Satan, he wasn’t condemning them for simply adding regulations to the written law. He was condemning them for bringing in the abominations of the Egyptian and Babylonian mystery religions and pretending they were simply interpretations of the Torah.

There are about 30000 Torah-observant Jews in the world today. The other 15 million follow, or participate in a culture heavily influenced by concepts from, the Babylonian Talmud.

The God of the Torah is the God of the New Testament. The god of the Talmud is Satan, who is also the god of the Quran. There can be no ‘Judeo-Christianity’ with Talmudic Jews; they have much more in common with Muslims than they do with us.

This is why Christians and Jews have been at each others’ throats for millennia now. It’s not because of some Freudian concept of ‘anti-Semitism’. Most Jews today aren’t even Semitic. It’s because our values and theirs can’t align. And they know it, even if we don’t.

I’ve done a bit of digging into these anti-Christian zealots in #Jerusalem and, guess what, they’re funded by exactly the same US-based billionaires as #TommyRobinson #PamelaGeller & the #GatestoneInstitutehttps://t.co/jLVoeucYIS

We have been blinded by distorted historical narratives and false flag operations to believe that Israel’s priorities are our priorities. They are not. The Zionists around Trump are ready for a war between the West and Iran, which will inevitably lead to a response from Russia and China. Are we willing to keep going down this road and staying silent, for fear of being called ‘Nazis’? Are we going to keep fighting for someone else’s imperial dream, when they treat us with scorn and contempt in return?

I’ve done a bit of digging into these anti-Christian zealots in #Jerusalem and, guess what, they’re funded by exactly the same US-based billionaires as #TommyRobinson #PamelaGeller & the #GatestoneInstitutehttps://t.co/jLVoeucYIS