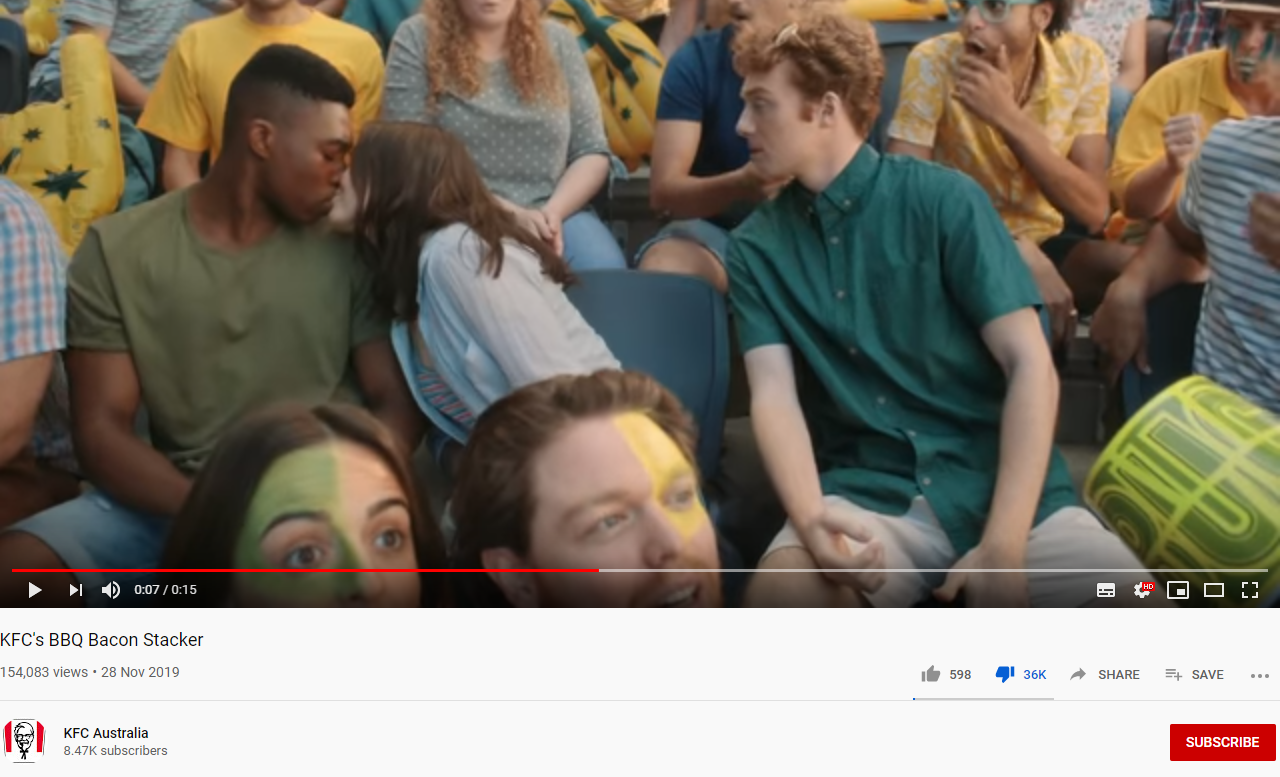 One of the things the left love to warn us about is the danger of racism.

Students in classrooms and lecture halls across the country have for decades been bombarded with historical pictures of mistreatment of Aborigines or black slaves in America or Chinese during the Gold Rush era to warn them about the dangers of white people being racist.

Usually this will be accompanied by images of the Holocaust combined with German posters of the 1930s and 1940s spreading ‘stereotypical tropes’ about Jews.

Images that mocked and demeaned people from a particular group, and which apparently led to death camps.

Fellow white men, if you hadn’t already noticed KFC is shoving it in your face so you see it.

In their most recent marketing campaign, KFC Australia has chosen to have a skinny, awkward, redheaded white bloke get caught on kiss cam with a pretty brunette beside him.

Looking horrified at the prospect of kissing him, and while he’s not looking, she thrusts herself onto the muscular African-Australian sitting on the other side while all the stadium looks on.

Could you think of a more perfect piece of propaganda to humiliate white men?

44,000 viewers couldn’t, which is the number of people who took the time to thumbs down the video, compared to 800 thumbs up.

That’s on a channel that only has 8,500 subscribers. It’s the equivalent of a stadium full of people throwing KFC’s greasy burgers back in their face.

This is the type of viral marketing a company would try to avoid, if that company actually cared about selling burgers.

But they don’t. Corporations like KFC, and the brainwashed bigots who staff them, care more about social engineering than they do about profits.

This KFC campaign isn’t a one-off. Ever since the election of Trump and Brexit, the cultural Marxist elite have gone into overdrive trying to gaslight white people into self-hatred and provoke minorities to hate the remaining white majorities of Western countries.

There is even a wildly popular comic strip called Stonetoss devoted to pointing out this agenda. 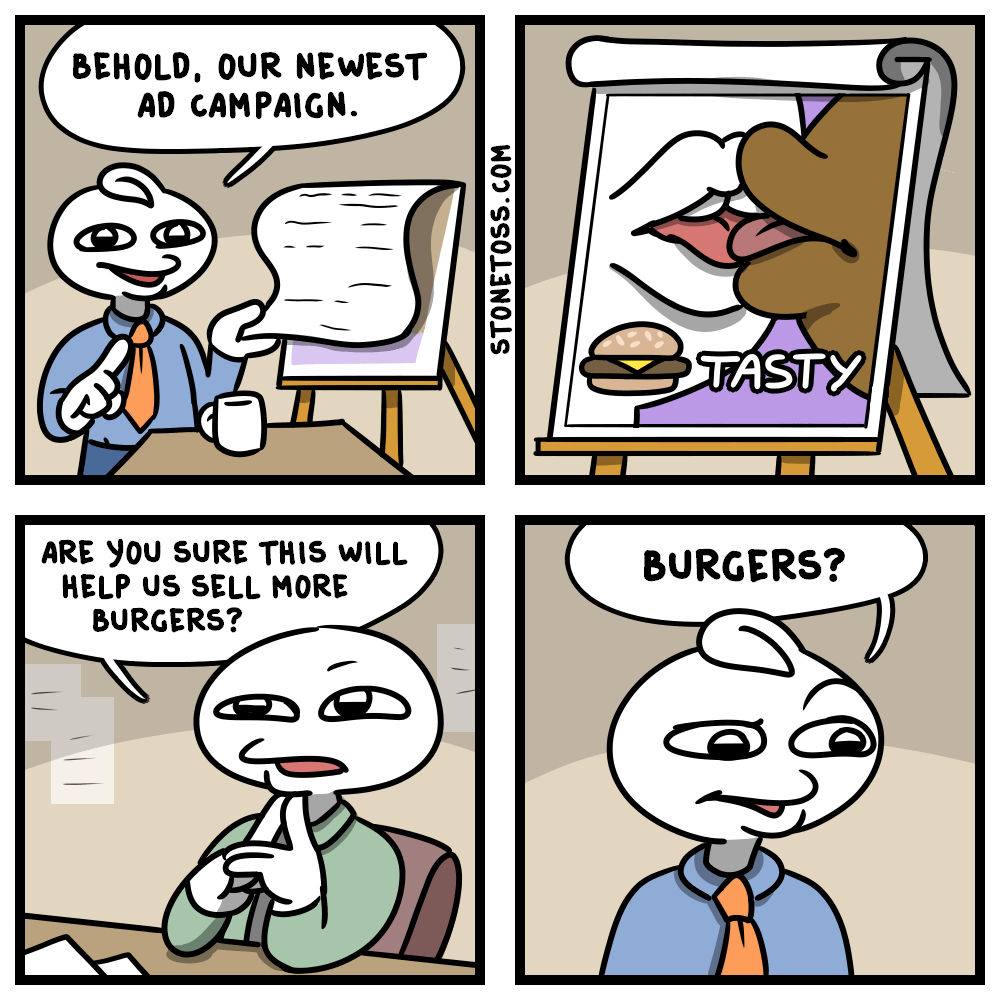 The memes are becoming reality.

I don’t need to provide a mountain of evidence for this agenda anymore. Once you see it, you see it everywhere. But where does it come from?

Universities. The ideology behind this agenda, which has been active in the West for over 50 years now, has been spread by campus radicals to impressionable undergraduates ever since the New Left student movements violently took control of higher education around 1968.

The same pattern prevailed in every European or European colonial country.

Cultural Marxist revolutionaries seized the means of indoctrination on every campus in the West, and they’ve been operating as a Marxist fifth column inside our countries ever since.

Once the radicals had seized the colleges and universities, they settled down to enjoy their plush offices, juicy salaries and security of tenure while they spread poison through the veins of our society.

That poison has now infected the minds of our young to such a degree, they think it’s necessary to wage a hate campaign against white men in order to prevent Hitler goose-stepping over the Harbour Bridge and declaring the Fourth Reich.

This is not hyperbole. This is exactly what has happened. You can see this cultural Marxist propaganda all throughout higher education.

The West’s most prestigious universities have entire departments devoted to celebrating the real and imagined achievements of minority ethnic groups.

They criticise and deconstruct anything to do with Western civilisation and the Europeans who built it.

The people who teach in those departments publish books which make arguments such as that the world is full of terrorism and black poverty because racist WASPs still rule the USA.

For decades, university newspapers have continuously kvetched about white privilege while their readers participate in violent demonstrations to end it.

Even the most self-hating of whites still benefit from white privilege, according to the cultural Marxists who brainwash our young adults.

This is just a glimpse at the multi-billion dollar anti-white complex which has been constructed in higher education across the West using tax dollars mostly contributed by whites.

All these people do, day in, day out, and on those taxpayer dollars, is spread hatred of white people based upon an ideology which has its origins in a fusion of the works of Marx, Freud and the French deconstructionists.

It’s an easy enough job, because the answer to every question is already sorted: It’s whitey’s fault, and we need to get him before he gets us!

Well there are university courses for that too. There was an event held at Sydney University in December last year called White Fragility, during which a New York Times best-selling author lambasted white people for being too brittle to be able to acknowledge how racist we are.

All of this toxic, racist bilge is extremely dangerous, but not for white people.

The left have no idea what they are messing with here, because they do not understand history.

The National Socialists did not come to power in Germany because the German people saw too many posters with hook-nosed Jews.

They came to power because Russia had just had a Bolshevik revolution which led to the genocide of millions of Christian Russians, and the German people feared they would be next.

National socialism arose as a reaction to international socialism, and all it took was for Nazi propagandists to point out the disproportionate number of Jewish people who supported communism for the campaign against the Jews, as well as Christians and other groups, to begin.

The cultural Marxist left are literally pushing exactly the button that needs to be pushed to make Nazis. And they can’t see it, because they have believed too many false historical narratives and refuse to face reality.

44,000 people chose to dislike that KFC video. That’s at least 44,000 people who can see this anti-white agenda for what it is. That’s a lot of people. And those numbers are growing.

If we don’t end this toxic hatred of all things white and male and Christian soon, we’re going to see a reaction against it which will terrify everyone.

Especially the communists at KFC.

You can view the ad in its entirely below. Make sure you give it a thumbs down once you do.