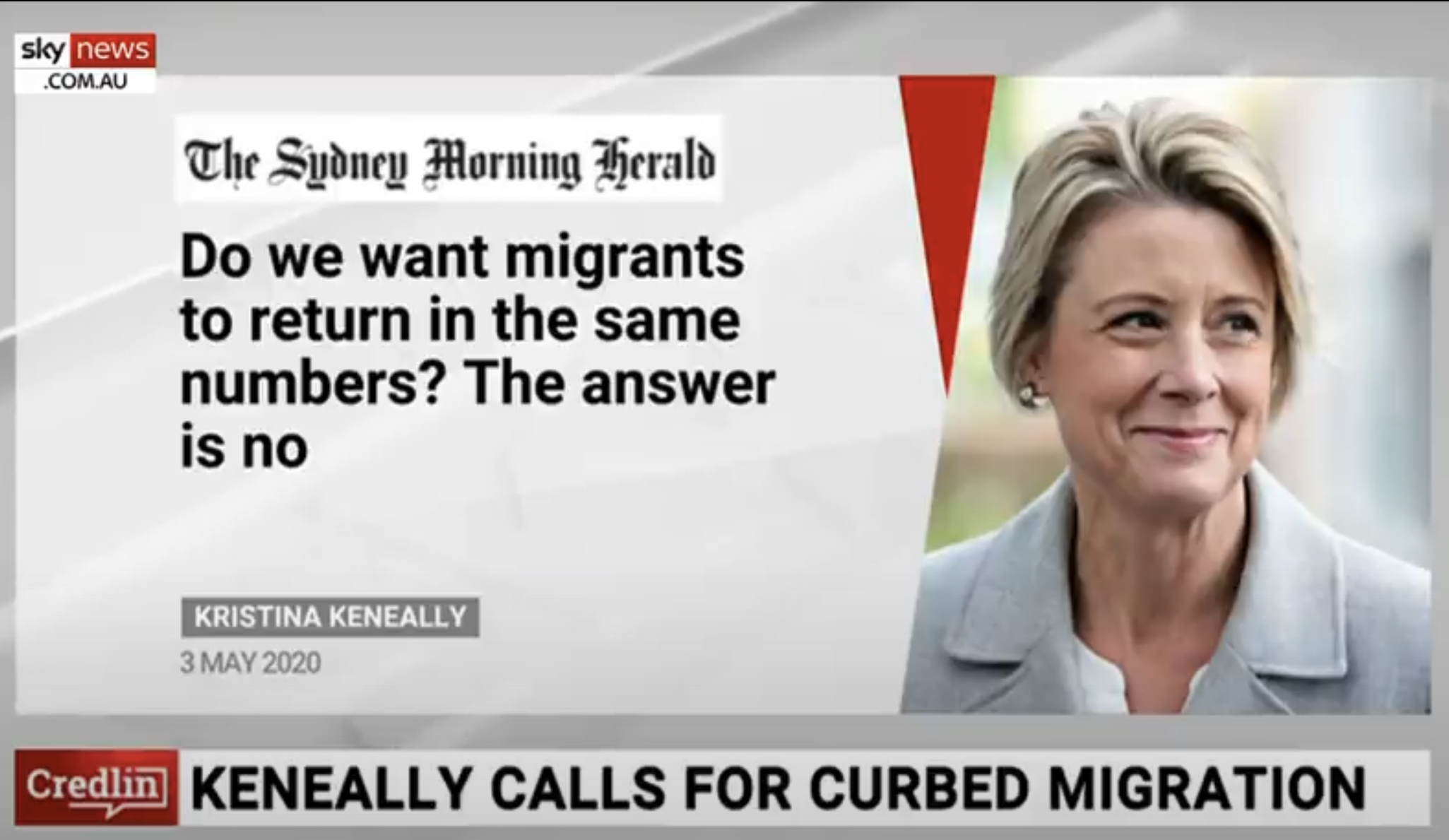 Kristina Keneally has stirred the big poo pot that is Labor immigration policy and caused a stir by writing an opinion piece in the Saturday 1 May 2020 edition of the Sydney Morning Herald which questions the wisdom of continued high levels of immigration in a post covid-19 Australia. I won’t bore you with too many details, you can read the article yourself, but really there are no surprises in it. In essence, she has suggested that Australia needs to prioritise Australians over temporary visa holders when it comes to employment.

I laughed heartily when I read this article because I knew this position would not be allowed to stand unchallenged by the Labor party Cadres. And sure enough, with the reliability of tropical rain, down came the shower of concerned Labor talking heads in the following 24 and now 48 hours. It seems that Kristina has wandered off the reservation of Labor party policy.

All the public concern and hand-wringing over Keneally’s article makes it clear that many in the Labor party are concerned, not with the high levels of immigration that have been and remain Labor party policy, but with the idea that one of their own could so publicly blindside her colleagues and wedge them on this sensitive issue.

The ageing, rusted on Australian Labor voter knows somewhere in the back of their greying head that the Labor party has betrayed them in favour of an alien replacement population, but to admit that is to admit that a lifetime of loyal support of a major Australian political party was all for nought.

They look around at the busy streets full of Chinese and Indians and wonder why their own adult children don’t seem to be doing as well as these apparently more industrious and deserving ‘new Australians’. For many traditional Labor voters, their adult children have struggled to stay in stable full-time jobs and to afford to buy a house. Their adult kids gave up on voting Labor years ago.

The ageing Labor voter will continue to vote Labor until he or she dies, as long as they are permitted to maintain the fantasy that the Labor party is the Australian workers’ party, when in fact it has long ago become the international workers’ party, and thereby the party of mass immigration. Opinion pieces like the one Kristina Keneally wrote in the Sydney Morning Herald accidentally lifts the sheet of tin and leaves all the mice exposed! Now they are running in all directions and cursing their colleague for upsetting the peace.

The Australian Labor Party wants Australians to vote for them, at least until there are so few of us left that our votes don’t matter to Labor anymore. They will continue to play the old songs about support for the Australian worker, while stacking as many Labor voting foreigners into the electorates as they can possibly fit.

And in the interests of bi-partisanship, it must be pointed out that the Australian Liberal Party is little better, they are also pro-mass immigration, albeit for different reasons.

It’s simple really, support of either of the Australian Labor Party or the Australian Liberal Party goes hand in glove with support for mass immigration. If Kristina Keneally was serious about redressing the abandonment of the Australian worker and cutting mass immigration she could only demonstrate her sincerity by resigning her membership of the ALP. But she is not going to do that, she just wants to sooth the disgruntled old Australian Labor voter and dupe them into voting her into office one more time. Once she is in power again, she will shrug off the anti-immigration thing as just a phase she was going through.

Seriously everyone, sit your ageing parents down, make them a cup of tea, look at them gently and tell them to stop bloody voting for either Labor or Liberal! Their policies are killing the future of young Australians.