Labor, the party of the worker, and the party that fights for the rights of the poor, wants to tax them further with a hike in cigarette prices which would 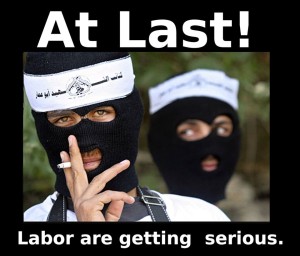 see a packet costing around $40. Of course, this proposed tax hike is thinly veiled as a health initiative, because, as you know, cigarettes are bad, m’kay?

Now, I’m a non smoker, so I have no particular love for smoking. But I like even less the self-righteous policies and postures of so called ‘progressive’ chatterers who think everyone would be better off if we’d just let them control our lives.

As Paul Murry in the clip below states, this proposal to hike cigarette tax is not really about improving health, because if it was they would be serious about helping people to quit smoking, rather than increasing a tax that will disproportionately hit the poor.

Labor’s proposed cigarette tax hike is a deeply regressive and classist (I can’t believe I just said that!) proposal which is aimed right at those the left purports to represent, but in reality holds in contempt as un-enlightened bogans.

The only government that is serious about getting people to quit smoking is the one that bans tobacco. The truth is the budget can’t survive without smokers says Paul Murray.