In his book, The Rational Optimist (2011), author Matt Ridley makes the case that the development of human success since our early ancestors has, in large part, been about the cooperation between groups and the embracing of trust; the idea that as societies have evolved, those that achieved success realised early on that through barter or trade (the market which socialists hate), both parties to an exchange could benefit far more from the end result, that the results from mutual cooperation could be greater than the sum of the constituent parts.

What’s happening within our society now is the Left, one half of the political exchange, has completely shut down the marketplace of ideas, declaring itself the solitary victor of any debate in the misguided belief that cooperation is a zero-sum game; to the Left there can only be winners and losers in the Culture War, no coexistence. Because their ideas are toxic, the silencing of debate and the censoring of dissenting viewpoints is tantamount to a moral victory; but that victory is coming with a steep price – the rise in societal dysfunction.

This weekend has seen me disappear down a few bloody rabbit-holes left by oblivious Greens supporters who seem not only both blind to logic but also to any reasonable discussion on the issues of the day.

This one started for me on Friday, when I came across this article by Junkee magazine [it’s all in a name isn’t it] celebrating noted Greens multicultural activist and part-time Tasmanian senator, Nick McKim’s “take-down” of Home Affairs Minister, Peter Dutton, that basically equated to calling Dutton a “racist” and “fascist” for his stance on South African farmers, noting as any Lefty worth his salt would do, that Dutton has clearly “been racist throughout his career”.

What annoyed me most about this article, and McKim’s interview with Sky from which the article quotes, was just how much both McKim and Junkee and their bevy of online supporters enjoyed the character assassination, revelling in their baseless accusations and doing what they do best, which is to paint any position contrary to their own as racist, and then let the moral tirade commence. The article further dredges up older allegations which Dutton has already repudiated, for example that he dissented from Kevin Rudd’s whole “Sorry” virtue signalling exercise in 2008 because he noted at the time:

“I regarded it as something which was not going to deliver tangible outcomes to kids who are being raped and tortured in communities in the 21st century,” Dutton said.

“Now, if I thought for a moment that it was going to deliver positive outcomes to those kids, to their families, to those communities, then I would support it in a heartbeat.”

I choose to believe that Dutton’s stance was principled but … of course, that’s tantamount to racism to the brainwashed ideologues on the Left too. This got me thinking however; let me look into the details of this and see what I can find. 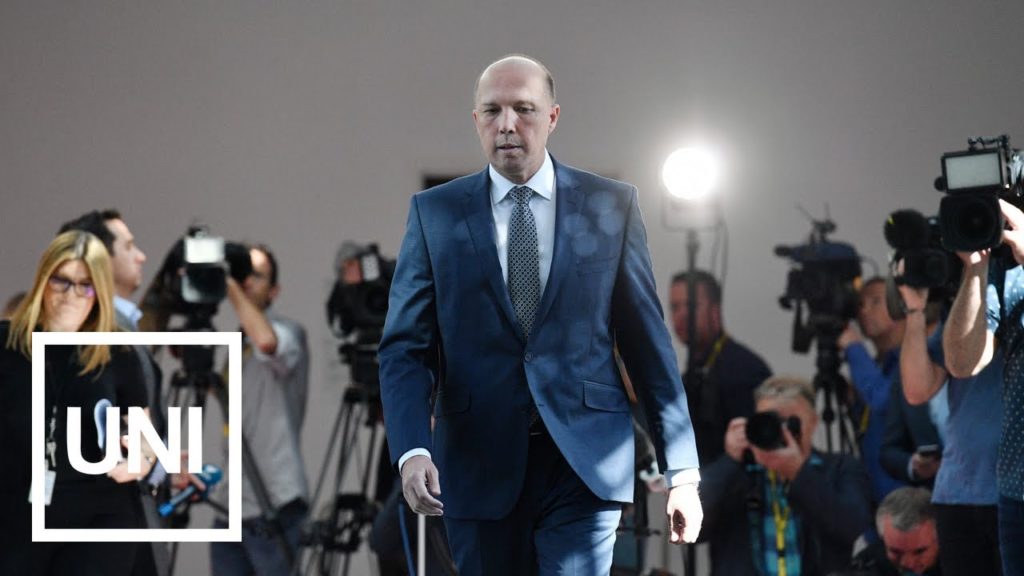 Dutton has been proven correct, with Aboriginal leaders and politicians from all spectrums alike noting that saying “Sorry” has been largely meaningless, although for different reasons; Aboriginal leaders because they believe that not enough has been done to atone, and politicians and the media that are honest enough to report on the matter because the sad reality is that saying “Sorry” has done very little about the conditions within Aboriginal communities, whether it be spousal and child abuse, alcoholism, drug addiction, violent crime, rape, mental illness or suicide in the decade that’s followed.

As this report from the Australian government’s Institute of Family Affairs in 2016 noted, close to 17,000 Aboriginal and Torres Strait Islander children were in foster care, at a placement rate of 56.6 per 1,000 compared to 5.8 per 1,000 for non-indigenous children – 10 times the rate.

A similar report noted in August 2017 that child protection agencies reported instances of significant harm, abuse or neglect amongst children in Australia aged 0-17, with the rate of interventions by authorities at 43.6 per 1,000 children for Indigenous children and 6.4 per 1,000 for Non-Indigenous children – 7 times the rate.

This piece from The Guardian in 2016 does a good job of pointing out that 8 years after “Sorry”, the Closing the Gap report showed that while statistics were improving for Indigenous Australians generally, what the report did not mention in all the cutesy “blueprints” and “roadmaps” was that an increasing number of Indigenous children needed to be removed from their families.

And it is here that we come to the hub of racism accusations about this topic; namely the dichotomy between those (such as the Greens) that claim White Australia looks through a cultural lens at the Aboriginal community and assumes dysfunction [That’s RAYCIST], and those who look at the statistics, and examples of terrible abuse such as at Tennant Creek, in the Northern Territory, or reports on the prevalence of Sexually Transmitted Diseases amongst young Aboriginal children and suggest that maybe we should all stop being so damn polite and acknowledge the disparity.

Of course, the Greens have now seen fit to politicise [as they do everything] the response to the very real issues on the ground by attacking those that have weighed into the discussion or raised concerns about the conditions that Aboriginal children live in, and the sorts of abuses that they suffer while in foster care, rather than addressing the root causes of why the children had to be removed from their families in the first place.

As in this piece in the Guardian this week, Sunrise’s Sam Armytage and guests came under significant attack for their segment discussing the idea of whether more white families should be allowed to adopt abused or neglected Aboriginal children, with NSW Greens MP David Shoebridge going so far as to lodge a formal complaint with the Australian Communications and Media Authority, labelling guest Prue MacSween’s comments that we’re potentially putting Aboriginal children’s lives in danger because we’re too scared to create another Stolen Generation, as “highly offensive, racist and divisive”.

What? If MacSween is poorly informed, fine, then she’s poorly informed, but how the hell is that highly racist and divisive? Are we so sensitive now to any form of cultural offense that it’s completely beyond the pale to even talk about the subject?

Noted Aboriginal leader, Warren Mundine, stated earlier this month in The Weekend Australian that “there is this fear about repeating the Stolen Generation. All governments need to do is enforce the law.” The same article quotes from a 2015 report into the abuse of underage girls by older Aboriginal men that frontline staff at the Department of Children and Families in the Northern Territory were reluctant to act for fear of being branded “racist” or “creating a second stolen generation”. As with the Tennant Creek case above, there is still community outrage for the two-year-old rape victim because the authorities had been alerted more than twenty times about violence or other incidents in that family yet had not acted for fear of seeming like they would be accused of improper action.

(Aside – as I was finishing this off, the news broke of another case, this time a 4-year-old boy in the Northern Territory raped yesterday.)

Why is this so important?

It’s important because the pattern that’s developed here with respect to Aboriginal communities in Australia, the welfare of young children, the hurling of accusations of racism, the constant shrill cry that white Australia doesn’t understand or should be quiet, the double standards that the Left clings to in order to keep it’s beloved pet class downtrodden, has led directly to a worsening situation for many Aboriginal children.

But the real kicker here for me is the similarity between this pattern, and the conduct of authorities, social workers and the like towards the victims of Muslim rape gangs in the UK, the reluctance to speak honestly about Islamic terrorism, our reluctance to speak openly about Sudanese crime gangs in Melbourne, or the cacophony levelled at Dutton by the Lefty apparatchiks regarding his “fascist” double standards for daring to suggest white farmers in SA are no less deserving of refugee status in this country – the same cloying political correctness and fear of being labelled racist that stifles reasonable discussion and actually discourages solutions to problems.

And that’s when I came across this Andrew Bolt article in the Courier Mail from September 2014, in which he sets out a litany of instances in which Leftist ideology had failed Aboriginal communities at that time, including the censoring of criticism, the labelling of Aboriginal critics as “Uncle Toms”, or the accusations of pushing a white supremacist rhetoric levelled at authors who warned of horrendous rape and murder statistics in Central Australia.

Bolt cites the example of censorship of books by historical author Susanna de Vries, amongst others, on early colonial life, sanitising accounts of Aboriginal culture by removing reference to violence, rape, abuse of girls etc for fear of offending – thus promulgating the idea that any and all problems within Aboriginal communities must be the responsibility of white people, because how else can we explain the downfall and abject social conditions which the “noble savages” endure in the 21st century if not to place the blame on white settlement.

Then there’s the example of the criticism levelled at any Aboriginal spokesmen such as Jacinta Price who dare to speak about indigenous culture in anything other than glowing terms, or who advocate against the divisive click-bait policies pushed by the Greens, such as the push to “Change the Date”.

Of course, Bolt has himself been the victim of violent attack by those on the Left for voicing his conservative opinion, while the likes of Pauline Hanson was denounced by Greens Senator Sarah Hanson Young, as inciting terrorism or being offensive to Muslims when the former took to wearing a burqa in parliament.

These days everything is racist, you don’t need an Oprah Winfrey meme to tell you that. 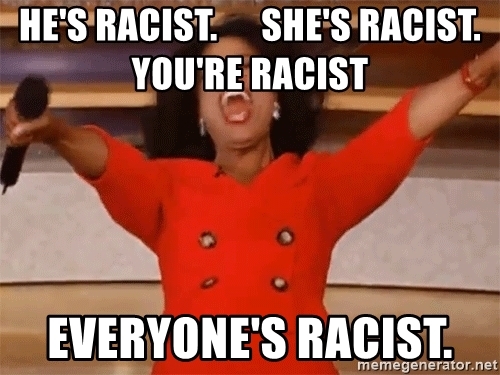 The Left has been incredibly astute at re-writing history and unilaterally regulating the boundaries of acceptable opinion. Simply telling the truth about a particular issue is divisive, and questioning immigration policies or the colour of refugees is fascism. If you see through the propaganda, you can however see the tensions escalating, communities fraying and a growing frustration from ordinary people sick of being silenced and no longer bothered about whether they hurt anyone’s feelings.

Once you take away people’s voice, it won’t be long before they start acting instead.