LGPT activists are now openly calling for state violence to suppress anyone and everyone who openly criticises their degenerate lifestyle. 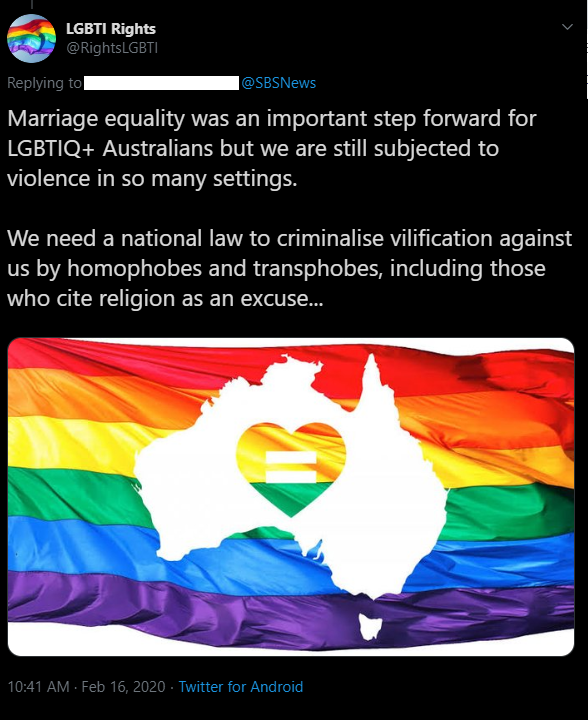 Many during the fake marriage debate predicted this would happen, but these predictions were met with jeers and scoffing from the “yes” side.

This latest development proves that sodomite marriage was never about “love” or “equality,” it was always about the destruction of the family, and the imposition of their sin upon us.

During the debate, Conservative Party Senator Cori Bernardi made this prediction, among others, stating that it could lead to many unintended consequences.

“The marriage plebiscite is a referendum on consequences…Changing the Marriage Act will affect you, your family and all Australians,” he said.

The Yes campaign was marked with abuse, with sodomite activist Benjamin Law famously stating he wanted to “hate f***” people he disagreed with politically.

Sometimes find myself wondering if I'd hate-fuck all the anti-gay MPs in parliament if it meant they got the homophobia out of their system.

The debate was often marked with violence as those on the “yes” side showed their views were about “love” and “tolerance” by assaulting people, getting them fired, and destroying property:

Supporters of the ‘no’ vote in the same-sex marriage survey are bracing for an influx of abuse from ‘yes’ trolls, now that the country has voted in favour of gay marriage.

On Wednesday morning just hours before the announcement, Coalition for Marriage boss Lyle Shelton took to Twitter to share a photo highlighting such shocking abuse.

Showing a car belonging to a Coalition for Marriage volunteer with its windows fully smashed in, Mr Shelton described the act as ‘unacceptable and unAustralian’.

The Greens confirmed the fake marriage was just a stepping-stone soon after the famous vote to make marriage law obsolete in Australia:

Queer campaigners are beginning to question the validity of same-sex marriage as a campaign focus… But if we are to think in terms of our ultimate objective as queer campaigners, then we should recognise that ‘equal love’ is a critical step…

The point of a campaign is less to solve everything, and more to build power to continue to achieve victories. Legalising same-sex marriage won’t only reduce discrimination — it will give queer organisers a stronger platform to create further change …

Queer campaigners should not win their rights by meekly trudging into the tent of patriarchal marriage, their tails between their legs. Rather, the same-sex marriage campaign can be about dismantling the walls of the tent, expanding it to be open to more of us, and continuing to liberalise this cultural institution …

It is now obvious that the LGPT was never about tolerance, but in fact about nothing more than inflicting their degeneracy onto the rest of society. 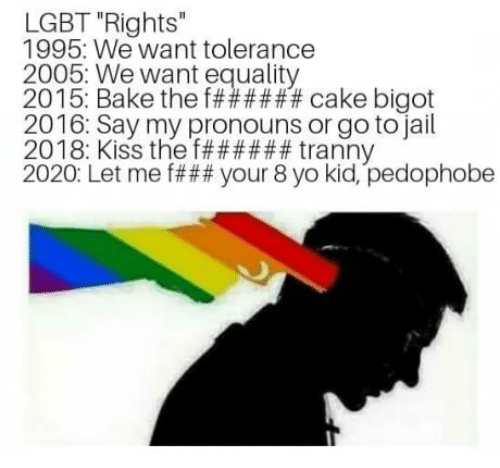