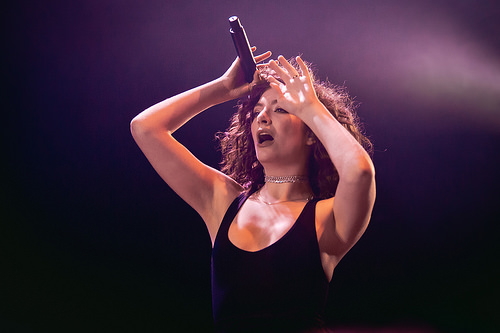 At the time of writing, the front-page story on Fairfax’s stuff.co.nz was Lorde refusing to perform at the Grammy award show because she wasn’t offered a solo performance.

This is apparently big news in little NZ. If you are a 15-year-old girl I’m sure this is a major story, but I like to think the majority of Kiwis couldn’t give a toss. Lorde is a 21-year-old singer-songwriter, real name Ella Yelich-O’Connor.

I admit I did click on the story, not because I was panicking at the thought of not seeing Lorde perform at the Grammys, but because this story seemed to be suggesting sexism is the reason for Lorde’s snub – here we go again.

A few days ago, Lorde’s mother Sonja Yelich tweeted a photo of a newspaper clipping circling:

“Of the 899 people to be nominated for Grammy awards in the past six years, only nine percent were women. (This year, Lorde is the only woman nominated for album of the year; she is not scheduled to perform.)” with the caption, “this says it all”

this says it all –@nytimes January 26, 2018 pic.twitter.com/R3YdHwieXf

It seems Sonja would rather people were judged by what genitals they happen to own rather than their musical talent. This sexism angle the media always falls back on is wearing a little thin.

Today the US media reported Lorde wouldn’t perform at the Grammys because she wasn’t offered a solo spot. Fairfax Media pointed out that the four male Album of the Year nominees were offered solo slots by the Grammys’ producers.

Lorde not being offered a solo spot at the Grammys could be due to many reasons; her music might not be as popular as her mum thinks it should be, or the decision to cancel her Israel concert after being pressured by pro-Palestinian activists may not have been popular with some people in the United States.

A few less kind souls have suggested the Grammys didn’t want to risk Lorde repeating her interpretive dance performance at last years MTV Music awards. If you want to put yourself through mental flagellation, watch the video below.

Feminists insisting women be given special treatment is the exact opposite of their ‘Equality for the sexes’ war cry.

Back on planet Earth we all know that there is no such thing as true equality, men are better at some things and women are better at others, and working as a team, combining our talents to complement each other, has been the recipe of success for humankind throughout history.

There are numerous and often multiple reasons why a person will experience rejection or failure in their lifetime. Suggesting sexism is lazy, unhelpful and the go-to response of our Left-leaning media.