It’s been a while since Keating has been able to put fake news on the internet (the new term for non-establishment pen to paper), as he has been busy working. 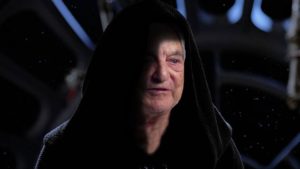 Needless to say, it’s been a great time watching the sequel to Brexit, as Trump did a Luke Skywalker and somehow beat the odds to shoot down and destroy Clinton’s Democratic Death Star. Shame. She could have been the first Sith President.

Amid all the fallout from the open-minded, tolerant, inclusive lefties, those who will respond to terror by hugging the next ISIS refugee to show that love trumps hate… has been a strange contradiction.

It seems that for the Lefties, Love hates Trump.

That is right, like some sort of twisted Anakin Skywalker, the left are going Sith and turning to the Dark Side, which would make Hillary their emperor.

Anyhow, for now let’s queue the Wookie dancing and celebrate, but you just know they are building the next Soros-funded Death Star somewhere out there…