What a disaster the 2 July election is unfolding for Prime Minister Malcolm Turnbull.

The Coalition’s chance of forming a majority government in the Australian House of Representatives is fading by the hour, and many voters, including Coalition MPs and Turnbull himself, are looking for someone to blame.

The truth is, Turnbull only has himself to blame. The rot goes back to Malcolm Turnbull knifing sitting Prime Minister Tony Abbott last September. At least Abbott managed to win a resounding electoral victory against Labor in 2013, precisely what Turnbull has failed to do. The electorate also abhors the unseating of a first term prime minister, something that was made patently clear after the Rudd-Gillard-Rudd merry-go-round. 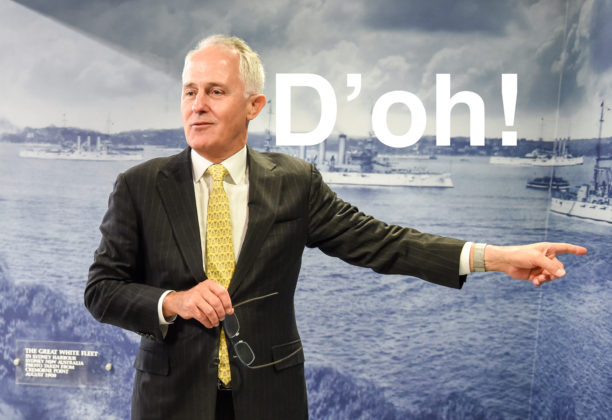 Despite all of Malcolm Turnbull’s promises of unifying leadership communicated in silken, erudite speeches, he has utterly failed to deliver. His arrogant knifing of Tony Abbott, and his soft stance on Islamic extremism and terrorism has alienated large sections of the Liberal party and the electorate. In addition, he has also angered so called progressives because he hasn’t delivered on pet leftist issues such as same-sex marriage and climate change.

Right now, Turnbull has failed to deliver for anyone, including himself.

He naïvely allowed his ambition and ego to dictate his grasping for the prime ministership, and even when he had it, he failed to call an election last year while his popularity was still high.

Holding off until the middle of 2016 to call the election, and furthermore, trigger a double dissolution, was always going to result in a more difficult Senate than he had previously had to work with. And that is exactly what has now happened, with the proliferation of new independents and minor parties.

Malcolm Turnbull has brought on a crisis for his government and his own prime ministership. And he only has one person to blame.