I wrote last week about the failings of modern liberalism through what I coined maltruism – the suicidal tendency of modern liberals to promote progressive ideology ahead of their own self-interest, to the detriment of the culture as a whole. My contention was that this was largely a function of good-intentions and the naïve assumption on their part that all cultures are equal.

I’ve been thinking more about this after reading comments to the article, one of them from site regular ‘9x19parabellum’ was the suggestion that there is in fact nothing altruistic about the left’s motives at all – it’s all predicated on a narcissistic play for power and personal status, that they couldn’t care less about the consequences just so long as the end-goal is achieved.

This week then I’d like to reinforce my opinion about those that Nasim Taleb calls the intellectual-yet-idiot class that in hindsight my sentiments were primarily aimed at.

I believe this group – the academics and commentators, the sanctimonious social media users, the ABC viewers and Guardian readers, the modern experts on all things diverse – genuinely operates for the most part in an altruistic fog; I see it all the time in my private life amongst friends, acquaintances and work colleagues, manifest in a desire to do good, to improve things, to look positively on any aspect of multiculturalism, Islam, immigration, gender identity, race relations and the like for fear of offending the broader sensibilities or alienating themselves from the groupthink of the bubble.

It doesn’t mean they’re not incredibly dangerous however. What I’m now realising is that these useful maltruistic idiots have usurped and redefined the conversation by blithely following a globalist script written to erase the concept of Western identity completely.

Our collective Anglosphere debate is being carefully manipulated by the lickspittles in government, desperate to sanction unpopular opinion or what is increasingly being called ‘hate speech’, by labelling anyone not suffering from the same collective delusion as racists, Nazis, fascists, white supremacists, the alt-Right, xenophobes and Islamophobes.

Given the predilection of the Left to escalate these attacks, I am in no doubt that we are rapidly moving towards a world where those not trapped in the maltruistic bubble are labelled as ‘unpersons’ and become, for all intents and purposes, ‘nopinions‘.

Continuing my recent dalliance with the world of linguistics, a nopinion is someone who has been censored, expunged or expurgated from social media or polite society for having the audacity to host a platform or hold an opinion deemed unsuitable by the mob.

The case in point this past week has been the pearl-clutching responses from progressives and the media alike to the “burka looks like a letter-box” comments made by ex-UK Foreign Secretary Boris Johnson, all desperately defending an archaic symbol of political Islamic oppression under the guise of “tolerance” in modern Britain. They are genuinely desperate to avoid offending British Muslims, however in their fervour the outrage simply masks the moral cowardice and failing of liberals to recognise that political Islam has nothing to do with “tolerance” at all. And for that Boris Johnson must disavow his comments or be struck off, removed from society, nopinion’d. 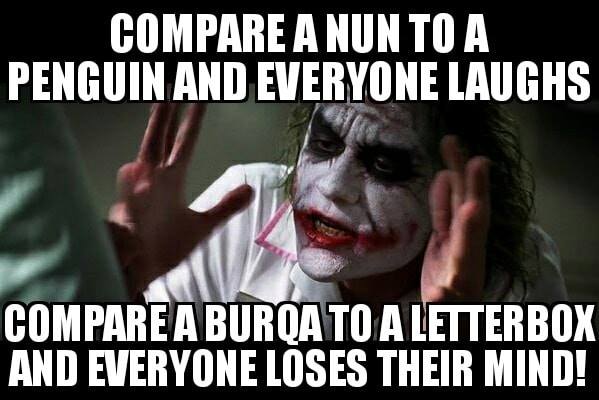 There is nothing comforting in the knowledge that a significant proportion of all Western countries’ populations are maltruistically intent on arguing for their own culture’s managed decline towards totalitarianism.

In every Anglosphere country we witness the same two sclerotic, self-absorbed political parties on the ballot, different in name only, using a combination of tired clichés and party jingoism to keep hold of power, promising much yet delivering little, beholden only to their interests and those of their globalist masters.

In Australia so many of our politicians are riddled with maltruism; theirs is the deliberate, anti-Australian, progressive mindset that currently spruiks Renewable Energy Targets, UN migration policy, and refuses to speak honestly about socio-political issues that every Bazza or Shazza is only too aware of. We have leaders who will hand out money to every globalist cause, but obfuscate and filibuster meaningful policy to improve the Australian economy or reduce our national debt. 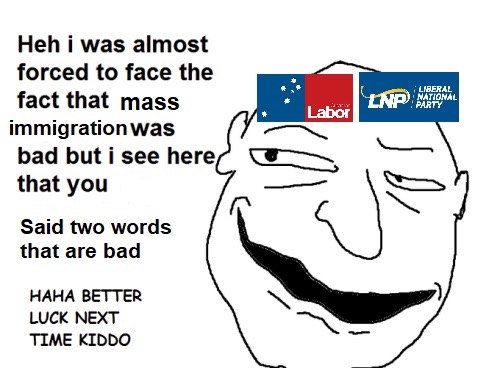 Ironically then, that when the LNP and Labour can barely cobble together any bipartisan legislation at all, we have two leaders in Turnbull and Shorten (and I use the term leaders very liberally) who this week united in their denouncement of Senator Fraser Anning’s “controversial” maiden speech, all but calling for him to be nopinion’d for daring to bring up issues with multiculturalism and Islam that any serious polity would have thrashed through a decade ago, were they not petrified of offending the ululating maltruists among them.

I will always argue that Australia is the greatest country to live in, the one which over time has promised unbridled opportunities for all willing to have a fair go. It’s getting harder and harder however to convince myself that the Australia that I love will exist in the future without a swift wake-up call to every voter in this country – liberal, conservative or traditional labour – to realise the dangers that maltruism poses. Vote the bastards out before we’re all nopinion’d.