Naturally, this being Melbourne, two dozen protesters managed to take time off work [laughter] to stand around in the street screaming at them from behind a huge line of police, and an even larger scrum of strangely aggressive journalists.

The resulting news headlines described Cottrell and his co-accused as “extremist”, “anti-Islam” and even “far-right fanatics” who “claim to be nationalists”.

Those leftist activists taking time out of their busy work week [further, prolonged laughter] to show up and scream hate-filled obscenities at those with whom they disagree were described by the press as “Anti-racists” or “anti-facists” [yes The Age actually misspelled “Fascist”]. The ABC even had the gall to label them “Anti-discrimination activists”!

The only spokesperson quoted for the rabble screaming spittle-flecked invective at the be-suited defendants was Debbie Brennan. Ms Brennan stated that “[Cottrell’s] speech is not tolerable…We say that’s nothing to do with free speech — it’s everything to do with hate speech… We see a very real threat and we are here to stop it … and not allow them their hate speech.”

Every single news report named Debbie as being a spokesperson for the “Campaign against racism and fascism” or as the more melodically challenged acronym “CARF”, a well-known front group for far-left activists. 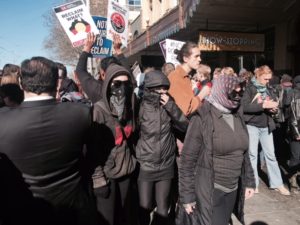 As I’ve pointed out previously, Ms Brennan is not only a long term Marxist, flag burner and writer for Green left weekly; she’s also a leading member of a radical feminist group so extreme that they view all heterosexual sex as tantamount to rape.

So in addition to wanting to institute a totalitarian, one-party state where all private property is confiscated, all political speech tightly regulated, all borders opened and the flag, constitution and even the concept of Australia is abolished, she also rages against the very biological mechanism for the perpetuation of human existence.

In what crazed fantasy world are this woman and her friends seen as legitimately protesting AGAINST extremism?

This is beside the fact that aside from Debbie, also present amongst the small and bedraggled band of dishevelled screamers were Ben Hillier and Chris Di Pasquale; both prominent activists in Socialist Alternative, the largest, most violent and fanatical Communist organisation in Australia.

A simple Google search would have revealed to those members of the fourth estate scribbling down their observations of the event, that almost the entirety of the “protesters” were activists from some of the most radical, violent and politically extreme organisations in Australia, information that may well have been useful to their readers and viewers.

I often wonder about the motives of Australian journalists in covering up for the far left like they do.

Are they simply incompetent? Can they not be into Journalism?

Is it bias? Is our society so sick that most reporters, after being fed through the humanities faculties of our sadly compromised higher education system, don’t see anything wrong with the tyrannical ideology that murdered 100 million people in the last 100 years?

Is it just plain laziness? Is performing a five minute internet search on the person you’re quoting too much like hard work? Has the profession of journalism sunk so low that the scribblers are now nothing more than stenographers for public relations firms, unable even in the information age to do even the most perfunctory research?

Whatever their reason for doing so, the mainstream media chooses not to report the fact that whenever there is political violence on the streets of Australia, Marxist groups and their semi-retarded black-clad Anarchist cousins are always to blame.

Just as we need to constantly remind the public about the dangerous and anti-Australian extremism of Greens like Lee Rhiannon, we also must do the media’s job in informing the public that no, that man or woman being interviewed isn’t an “Anti-racism activist” or “Community organiser” or “Peace campaigner” or “Refugee advocate”; they’re a violent extremist.

We need to tell the average Australian that these people want to destroy your country, your people, your family, your heritage and your history in service to their dreams of utopia via totalitarian dictatorship.

Because God knows it seems the press isn’t going to. 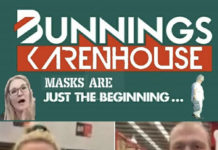 The totalitarianism of the Karen from Bunnings pile on