Some writers and commentators here at XYZ have begun to identify themselves as White Nationalist.

I would rather leopard crawl over a hundred metres of broken glass with my fly open than do so.

I would rather climb a fifty meter rope ladder out of an Olympic swimming pool filled with margarine and populated with bad tempered wombats than describe myself as such.

I would almost rather go on a three hour date with Clementine Ford.

But why? I hear you ask out there in reader land. 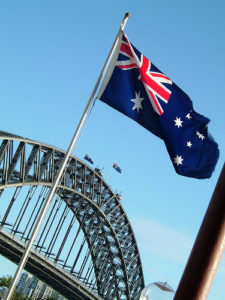 After all, anyone who has read my output here at XYZ knows I have nothing against the concept of Nationalism, nor do I have anything against water being wet or the sky being blue. Nationalism is not a social construct; it is the base reality around which all other social constructs are created. The default unit of organisation for humanity is the extended family. When related extended families from a region come together they form a tribe or a clan, and when those tribes or clans come together they form a nation.

And even more than that while it is certainly possible to form a Nation out of faith, language or similar culture the default remains common ancestry; in fact with a few notable exceptions nations without at least some common origin to bind them together don’t tend to last that long [see: all of history].

So since I see Nationalism in general and ethnic Nationalism in particular as not only moral but natural, and since if you’ve read my articles over the years you know I’ve certainly got nothing against white people, so why on earth would I be so set against White Nationalism?

–Fifty-four per cent of us want a cut to migration all together
-55 per cent agree Australia is “in danger of losing its culture and identity”.
-52 per cent said the country has changed so much that it sometimes felt foreign.
-More than two-thirds of Sydneysiders think Australia’s largest city is “full”
–74% do not support changing the date of Australia Day.
-At the last Federal election, parties of the dissident right captured over a million voters.

There is a gigantic well of support out there for politics to the right of the Liberal/National parties. It’s freaking huge. It is without doubt the largest unserved constituency in Australia today.

There are literally hundreds of thousands of people out there in our country looking for a voice they don’t currently have and even more who would be open to it if they heard it.

Almost no-one out of that huge potential pool of recruits waiting out there in middle Australia wants to have the slightest thing to do with the likes of obese hypocrite Mike Enoch, professional troll Andrew Anglin, unstable psychotic Christopher Cantwell or terrible publicist Richard Spencer, and that’s if they even know who they are.

In the Australian context there is absolutely nothing at all to be gained from associating with such people in any way shape or form.​

I can hear the pathetic whining already: “But they’ll call us Nazis anyway! They call everyone a Nazi!” That’s both 100% true and entirely irrelevant. Yes the Left has called everyone from John Howard to George W Bush to Milo to Donald trump a Nazi, that’s no reason to actually be one.

If the left wants you to be a Nazi for their own ends so in response you act like a Nazi and yell “Aha! See I have fooled you!” that’s not weaponised irony, that’s f*cking stupidity.

For those who would dismiss these words out of hand let me tell you, I’m not speaking out of ignorance. I’ve watched over the course of almost two decades as foreign-inspired groups here in Australia have failed time and time again. As David Hilton has pointed out, Australia was founded as an ethno-nationalist state and continued as one until at least the late sixties. There is absolutely no need to slavishly follow the lead of anyone from overseas, be it Milo peddling “Cultural Libertarianism” or more marginal figures re-heating “Doctor” David Duke.

I’ve talked and met with nationalists and dissident rightest from all over the world and have come to the inescapable conclusion that no patriotic movement ever succeeds unless it is rooted heart and soul in its own people, its own circumstances, its own history and its own culture.

In Poland recently almost 100,000 patriots marched in celebration of their country.

United they drowned out the pathetic Communist traitors protesting against them and created a sea of light as an invincible community marching as one. Richard Spencer and his friends criticised them on their Alt-Right Politics podcast as “not real nationalists” because they were insufficiently hostile to NATO.

It’s worth pointing out that in contrast to the heroic Poles he critiques, Spencer can only organise a few dozen supporters to attend his college talks. He unquestionably does get a lot of ink spilled over him though so I’m sure that makes up for it [rolleyes].

I know whose lead I’d prefer to take.

Italian, French, Spanish and other European nationalists don’t refer to themselves as “White Nationalist”, only Americans and those from English speaking countries foolish enough to allow themselves to follow a pied piper down the rabbit hole of perpetual failure proudly wear that moniker.

Call yourself whatever you like, call yourself the “Association of Pink Donkey-tails” if you wish, you’ll have better success than if you have anything to do with the almost bottomless pit of failure that is “White Nationalism”.

If taking up a name potentially loses you supporters and gains you nothing in return, the political maths aren’t hard. The Australian right has a chance of something incredible here, something that has not happened in my entire adult life. The Australian right, the dissident right, the real right, has a chance of actually winning for once. The sea is ready for the revolutionary fish to swim in, yet some people seem intent on not only pissing in the water but trying to drain it entirely.

If disassociating from a movement and a philosophy so weak and incompetent that they can’t even scrape together a march of 600 people in a small Virginian town from a country of over 300 million without inviting former KKK organisers and current neo-Nazis is the price to pay for not alienating our own base, then it isn’t much of a price at all.

All we need is us.