So the front page news today is that the current Victorian State (Labor) government may have rorted taxpayers by using staff employed in the offices of members of parliament for its much lauded “grassroots campaign” in the lead up to last year’s state election. So grass roots was this campaign, it seems, that staff in the employ of one member with office digs in a far off suburb, were allegedly being employed to hit the hustings in another suburb many miles away, and, worse, were forced to carry red clipboards and wear matching red t-shirts as they went door to door, soliciting votes. Such was the all encompassing nature of this “grassroots campaign” that there was even an accompanying blitz over the phones, as tattooed men in the employ of one of the unions searched for conjunctions linking sentences together on one end of the line, whilst swinging voters dangled at the other end, poised breathless for the vote winning policies being articulated, if only the union grunt could locate something resembling a working noun to accompany the repeated verbal construct “and we’re gonna.” What vote winning amusement for the punters. 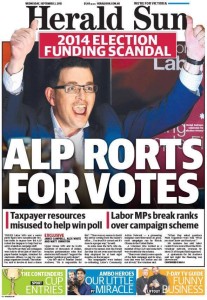 It now transpires that all of this “grassroots” campaigning may have been a little bit dodgy at best and a little bit illegal at worse, going on the allegations made by disgruntled factional heavies – none of whom can be asked, of course, because they are traditionally faceless. This comes after the new Labor government, with its special relationship with the union movement, has delivered Victorians the first, and now the second, public transport strike in more than two decades. Quite an achievement. The transport union has even called a one hour strike at 3am in the morning which it admits has no purpose whatsoever. All said with a straight face and not a hint of irony. It makes perfect sense in the sheltered workshop that is the remnants of the union movement in the early 21st century.

All of this reminds of the stuttering Royal Commission into Trade Union Corruption, an endeavour completely unnecessary in the humble opinion of this columnist – we don’t need a Royal Commission to tell us what we already know. And then there is the front page spectacle of a Labor government tearing itself apart with factional infighting and score settling as it rorts the hell out of the taxpayer. No shit! This is merely the continuation of a proud Labor tradition exemplified by the revolving chair that was the New South Wales premiership during their tenure, and, of course, most prominently, the charmless spectacle that was the Rudd-Gillard-Rudd “government,” with its mind numbing deficits and accumulation of generation transcending debt.

Upon reading this headline and glancing over this front page, the immortal words of the literary genius that is Lord Blackadder sprang immediately to mind – “Well cover me in egg and flour and bake me for 14 minutes!” It is the Labor party we are taking about. The real mystery is why otherwise rational people, unaffected by mind altering substances, continue to vote for them.