When we consider the big events of the last year, the year of Western Revolt, three movements spring immediately to mind: Brexit, Trump, and the rise of minor parties on the Australian right.

What all three have in common is: concern over the lack of control of immigration; concern over the growing influence of Islam in the West, and the threat it poses to our security and way of life; and opposition to left-wing political correctness which stifles our ability to deal with these challenges effectively. The ongoing ramifications of the political decisions made by the electorates of Great Britain and Australia will be exciting to watch, and the potential of a Donald Trump Presidency at the start of next year, positively scintillating. 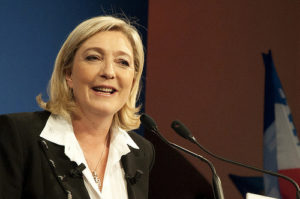 A fourth equally as important event is coming up early next year, and not a moment too soon: the French Presidential election.

The following cannot be said any clearer, and cannot be considered for a moment to be hyperbole: Europe, and particularly France, stands on the brink of civil war. A guerrilla army now resides in Europe. If you have the time, this extensive article in Gates of Vienna from November last year expands on exactly this reality. Attacks by this guerrilla army are surprisingly predictable. Anywhere there are crowds of Europeans living their lives freely, any time the people of Europe celebrate important events that epitomise who they are, any place that is a symbol of European freedom, culture religion and identity, is a target.

Each Islamic attacker (and they are always Islamic) shows in hindsight to have left a trail of clues as to their mindset and their intent, whether on social media, through personal interactions, or actual criminal records. Entire communities exist in Europe which harbour, sympathise with and produce the soldiers for this guerrilla army.

Governments across the West are constantly increasing surveillance, increasing dialogue with the Islamic community, and spending more money on counter-terrorism. However, incidents of Islamic terrorism are only increasing.

Should Marine Le Pen win the Presidency, her task will be monumental. There will be incredible opposition from the French and European political and cultural elites, media, academia, and unions. There will be widespread and organised resistance from French citizens on the the left, in concert with the Islamic community. And Islamic terrorism would most likely spike.

But the election of the National Front in France, whatever one may think of them, will lead to a renaissance of European identity; we are witnessing the reemergence, the mainstreaming of the idea that Europeans have an identity, based not on loose weasel words such as “tolerance” or “openness,” but on their identity as Europeans. Furthermore, the election of Marine Le Pen may build momentum for a Frexit, which would help reinforce the victory won by Great Britain in winning back its independence from Europe, and all but doom the anti-European European Union.  And a government in the heart of Europe determined to deal head-on with the root cause of Islamic terrorism – Islamic Terrorism – allied with an independent Great Britain and a Trump-led USA, may have a hope of defeating terrorism in the West.

The fact that an opinion poll last month suggested that Le Pen is now favoured above both Hollande and Sarkozy in the race for President is very positive.  Next year’s French Presidential election will be yet another key moment in what is turning out to be a pivotal epoch in which we are living.  The future of France and of Europe depends on it.

In short, watch this space.