We don’t, of course. For one thing, since the audio of Trump’s conversation emerged over the weekend, it has literally been the most talked about thing in the world, with media pundits, politicians from both sides of the spectrum and anyone with access to Facebook and an uncontrollable urge to virtue-signal all lining up to bash Trump from pillar to post and declare his campaign all but over.

For another, the idea that Trump’s private conversation about women allowing him to kiss or touch them, crass though it may have been, somehow amounts to him condoning sexual assault is, at best, a bit of a stretch. 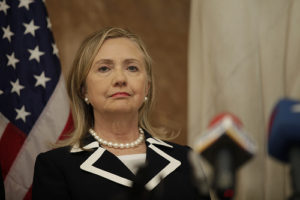 No, if we are to discuss the day-to-day behaviour of the US presidential candidates, our efforts would surely be better spent focusing on that which actually points to a lack of suitability to hold the most powerful office in the world and, in particular, that which large sections of mainstream media have so far chosen to give only the most cursory treatment to or ignore outright.

You know, things like using private email servers for classified State Department communications, providing legal defence for a rapist and then laughing about it, intimidating your husband’s rape victims into silence, and accepting charitable donations from known Islamic State backers – that sort of stuff.

Those, Waleed, are some things we should really talk about.