Two words – OF SOCIALISM. Repeat them to yourselves several times.

It’s not difficult to say two words is it? Say them again.

Now here’s why. Whenever you hear, read or write the term “far-right”, add those two words to the end.

“The far-right OF SOCIALISM.”

See how it works?

There have been heaps of articles, particularly recently following the antics of Antifa, the far-left socialist organisation that claims to be fighting against the far-right…of socialism – are we getting it yet? The usual “but Nazism is on the left, not the right” and “but it’s the National SOCIALIST party” style arguments are futile. We will never be able to reverse the post-war fraud that Nazism was somehow equated with “the right” and therefore conservatives, libertarians and classical liberals are somehow just a few bad thoughts away from turning into goosestepping morons clad in Hugo Boss and driving Volkswagens.

Now is not the time for another article explaining why Nazism is of the left, there could be a thousand articles between now and next week on the topic and it won’t make one jot of difference.

So instead, let’s speak truth to power and place Nazism firmly where it belongs; on the far right…of Socialism.

This is no rhetorical trick, it is being truthful. Calling Nazism “far-right” without the “of Socialism” descriptor is the same as calling Co2 “carbon” – it’s inaccurate, dishonest and misleading. The “Nazism is on the left…” argument is ended when you call it the far-right…of Socialism. It literally hurls the accusation straight back at the accuser, the ball is back in their court and it cannot be fired back at you, it’s a killer shot, with a red hot cannon ball at 1000kph.

Lefty: “But Nazism is the far-right.”

Righty: “Yes it is, the far-right of Socialism.”

Now here’s the hard part for you, the humble conservative / libertarian / classical liberal; USE IT. Don’t just read this and forget about it a few hours later, adopt it as standard practice when talking about the far-left of Socialism and the far-right of Socialism. Introduce it to people you talk to, clarify and correct social media posts that refer to “the far-right” and ensure that every time you write “far-right” you follow it with “of Socialism” – unless of course you’re talking about Ancaps. You can also use “Socialist far-right” if you really want.

To really add to the misery of whichever ahistorical, gormless prat you’re talking to, don’t forget to remind them that the far-left of Socialism and far-right of Socialism were good chums for a few years and even invaded countries together. The Poles understand the horrors of Socialism more than anyone. Invaded from the left by the far-right of Socialism and the right by the far-left of Socialism, Poland lost half it’s population in World War 2. Every single member of every family lost at least one member of their immediate family; a parent, brother, sister or son or daughter. Then to add insult to Socialist inspired genocide, the Poles lived under far-left Socialism for another half century. 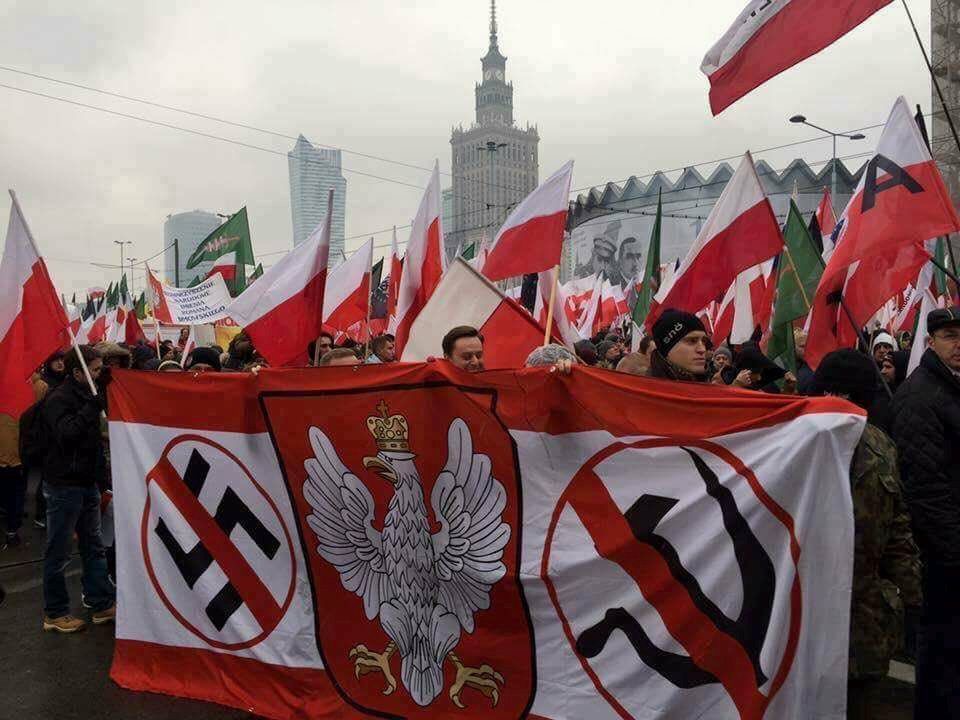 A recent meme from the left suggested that Antifa were equivalent to troops storming the beaches of Normandy. A lie so utterly absurd it could only be suggested in the inverted reality we now live in. A simple experiment; if Tommy Robinson (you know, that “far-right, racist” blah, blah, blah) and a member of Antifa were sucked into an event horizon and ended up in 1939, which one do you think would be fighting for which side? There is little doubt Tommy would be…a Tommy, and the masked blackshirt goon would be wearing either a brownshirt or telogreika.

In any case the Nazis are gone, we defeated them already. Save for a few basement dwelling Larpers, the Nazis are no more. It’s always good to remind the far-left of Socialism that we defeated the far-right of Socialism over three quarters of a century ago and remind them that we realise they might be confused since they used to be mates, and the two branches of the same ideology are so similar you just need to add the prefix “Inter” to National Socialism and you’re a far-let Socialist.

Now you can sit there and repeat the arguments from the latest tome on how “Nazis are of the left” (Dinesh D’Souza has made a fine effort with “The Big Lie”) but ultimately, few are going to indulge you, that’s assuming they even have the wit or intelligence to understand the arguments. Or you could have some great fun by asking the next swivel-eyed, loony lefty you meet; “Are you a far-left socialist or a far-right socialist?”. Or when they fling the “Nazi!” label, simply reply; “I think your confusing me with a far-right Socialist.”

So there it is. A simple, honest, two-word solution that also happens to be fun. If you don’t use it then you deserve to lose it.