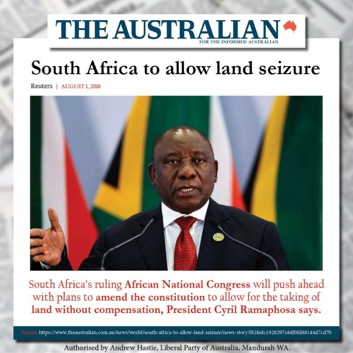 “South African President Cyril Ramaphosa has said the ruling African National Congress must initiate a parliamentary process to enshrine in the constitution a proposed amendment, paving the way for land grabs without compensation.

“Ramaphosa, who vowed to return the lands owned by the white farmers since the 1600s to the country’s black population after he assumed office in February this year, said on Tuesday that the ANC would introduce a constitutional amendment in parliament.”

If this were to happen, then there are growing fears that the planned land expropriation will deliver a fatal blow to commercial farming in the country. This may in turn place the country on the verge of a food production crisis, similar to the one that occurred in Zimbabwe when it implemented a similar stance on white farmers in 1999-2000.

Is the expropriation of farming land to extend to residential property, which could mean white South African’s will then be left homeless?

I strongly feel the need to state, if this amendment to the South African Constitution does occur, then Australia had better not be throwing away taxpayers’ hard earned dollars in aid to South Africa ever again. This situation is abhorrent, and it is history repeating itself all over again. Could this be another genocide in the making?

In a related article, Russia’s Vladimir Putin has realised the benefit of welcoming the South African farmers into Russia:

“The farmers are prepared to make a contribution to Russia’s booming agricultural sector, according to Rossiya. Each family is ready to bring up to $100,000 for leasing the land.

“Russia has 43 million hectares of unused farmland and has recently begun giving out free land to Russian citizens to cultivate farming. The land giveaway program, which began in 2014, has been a huge success.”

Meanwhile in Australia, our farmers are suffering, and our arable farming land is being flogged off to Chinese investors for the benefit of Chinese agriculture. I think Putin can see for his own country what we here in Australia are missing.

Providing immigration aid to the suffering South African farmers would be a form of productive immigration, and exhibit the humanitarian qualities that Australia espouses to the rest of the world. It is often stated in the mainstream media that white South African farmers are not subjected to racially motivated crimes; this we know to be not true.

The violence that has been occurring against the farmers will only continue to increase once the land appropriation amendments are passed through Government and implemented.

It is ironic that the concept of equality seems to have been all but forgotten in South Africa.

You can visit Emma Eros at Facebook and Smarter Australia.