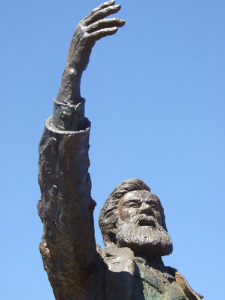 Today, the 27th of May, marks an important date in Australian history, a date which would determine what kind of country Australia would become. I am referring of course to the birth of the father of Australia’s federation, Sir Henry Parkes.

One thing I quickly realised when researching Parkes’ life, in order to make a facetious point about Australian history as the AFL inflicts another Indigenous Round upon us, is how little I know about Parkes’ life and Australia’s colonial history. Obviously, I can blame no-one for this but myself.

Like Joseph Haydn, of whom I wrote briefly last night, Parkes persevered through much of his early years, enduring business failures, a long ship voyage from England to Australia, and further business failure and bankruptcy, before he built a career in politics and journalism that would leave a lasting impression on Australia.

Reading this biography has piqued my interest in the movement which opposed the transportation of criminals to Australia, the philosophies and histories of radicals, liberals and conservatives in 1800’s Australia, and how the revolutions in Europe affected politics in the colonies; the transcript of Parkes’ Tenterfield Address also opens a window into the thinking which led to the Constitutional Convention and the Federation of Australia; ie, the need for a national army for national defence, and a national government in order to command it:

“To make myself as plain as possible, Australia has now a population of three and a half millions, and the American people numbered only between three and four millions when they formed the great Commonwealth of the United States. The numbers are about the same. Surely what the Americans have done by war, Australians can bring about in peace.

“Believing, as I do, that it is essential to preserve the security and integrity of these colonies, then the whole of our forces should be amalgamated into one great Federal army. Seeing no other means of obtaining these ends, it seems to me that the time is close at hand when we ought to set about creating this great national Government for all Australia.

“This subject brings us face to face with another subject. We have now, from South Australia to Queensland, a stretch of about two thousand miles of railways and if the four colonies could only combine to adopt a uniform gauge, it would be an immense advantage in the movement of troops. These are two great national questions which I wish to lay before you: one great federal army and a nation wide uniform gauge railway line.”

Great man. Perhaps one day they’ll play a game of football in his honour.