I spent 15 years of my life growing up in the Queensland electorate of Oxley. I know the people there. And they’re not keen on dirty, sneaky political machinations that put self-interest ahead of the national interest.

That’s why I don’t think they’re going to like it when they see that Pauline Hanson’s One Nation has preferenced the Socialist Equality Party and Labor ahead of Fraser Anning’s Conservative National Party in the upcoming federal election. 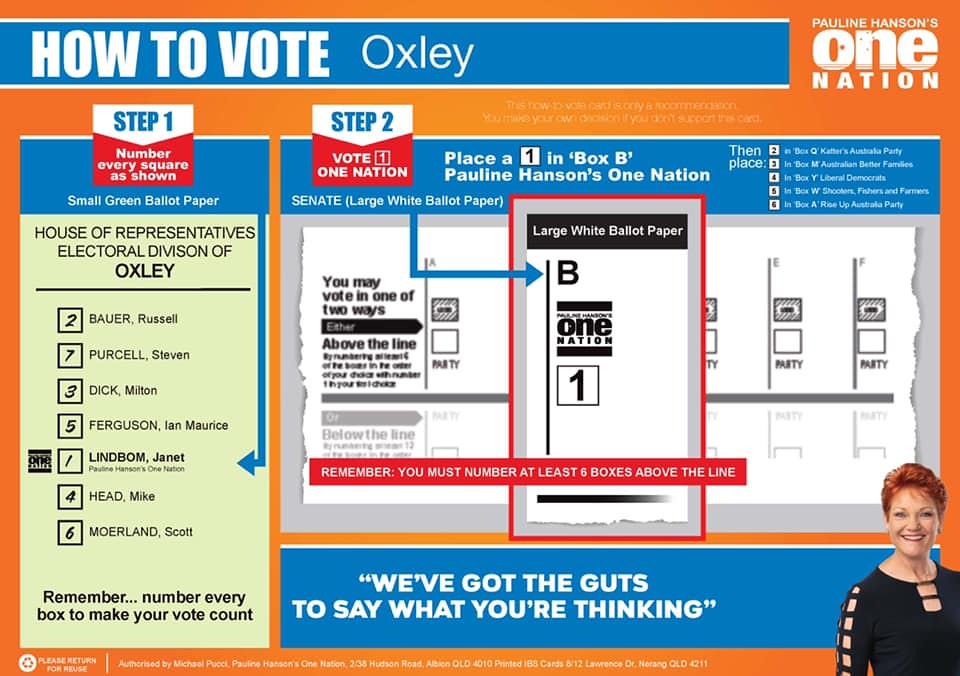 One Nation has placed the LNP second, Labor third, the Socialist Equality Party fourth, the United Australia Party fifth and Fraser Anning’s CNP sixth. Only the Greens came after, in seventh.

That’s exactly the type of corruption that people in this country are sick to the teeth of. The Socialist Equality Party are hardcore Trotskyites with links to the globalist international socialist organisations. They’re basically Antifa, funded by Soros. And Pauline put them fourth.

They even retweet slackbastard, the deep state Antifa blogger who regularly doxxes and defames nationalists and calls for political violence against the people Pauline is expecting to support her.

Is there any greater sign that all elements of the current political establishment are hopelessly compromised, and a complete reboot is needed?

One of the primary drivers of the current rebellion against the globohomo uniparty establishment is a repugnance with corruption.

It’s a plague at all levels of our society. Our politicians are bribed and controlled by foreign interests. Our media serves the interests of corporate oligarchs and international financiers. Our education establishment has been thoroughly corrupted by utopian, nihilistic ideologies introduced from Central Europe which have taught us to hate ourselves. The leadership of our churches has become indistinguishable from the broader corporate elite.

No-one with power today speaks the truth. All have become liars for money, respectability and membership of the establishment.

This is why the formerly sleepy political centre in this country is fast becoming the militant, dissident right. We are not interested in shallow cults of personality crafted by slick PR operatives. It’s the truth or death. And anyone who puts themselves forward as a leader to tap into this rising social and political earthquake has to have their motives and influences questioned.

So let’s ask ourselves: What has Pauline Hanson done for Australia?

After all the years of stirring nationalist rhetoric and political stunts, what’s changed? Are we officially terrorist-free? Have we not been swamped by Asians in our big cities? Have we secured the family, maintained our way of life, overthrown the usurious tyrants of international finance and restored the sovereignty of the people?

No, no, no, no, no and no. Nothing. Zero. Just false hope while Pauline and her mates got rich.

Enough. I don’t know if Senator Anning is going to follow through on his promises, or prove to be yet another false hope. Only time will tell. But at the moment, the CNP is the best shot we’ve got for a true populist party in this country. It’s the best shot for the political break we need to overthrow the corrupt establishment.

And its crooked, PHONey enablers.