One hundred years ago, in June 1916, soldiers all along the Western Front among the British and allied armies were preparing themselves for ‘the big push.’ That was how the planned summer offensive was described at the time. Today we know it as the Battle of the Somme, after the river in northern France around which the initial battles of the took place. On 1st July 1916, thousands of British, Commonwealth and French forces would go ‘over the top,’ leaving their trenches to walk, and they did walk, across the shell-pocked land in between their lines and that of the Germans, a stretch of bloody turf known as ‘No Man’s Land.’ On the first day alone, 1 July 1916, the British Army would suffer catastrophic losses, sustaining around 60,000 casualties, a staggering 19,000 of which were killed in action. Many fell in the first hour, and all in the course of a single day, by far the worst day in British military history. At Beaumont-Hamel, where trenches, now grassed over but still deep in some places, can be seen today, the Newfoundland Regiment, near 1,000 men strong, went over the top against strongly defended German positions on the morning of 1 July 1916. More than 800 did not respond to the roll call a few hours later. Similar stories were being told all along the line.

The first day of the Somme was an unmitigated disaster, the full horror of which would not become clear until well after the guns had fallen silent. The British Army that left their trenches that day were largely volunteers – Lord Kitchener’s so-called ‘new army.’ It was comprised largely of men who had volunteered together, in groups, from sporting clubs, churches, schools and neighbourhoods, who were promised that, if they joined together, they could serve together, in the same unit. No one had thought that those who served together might also die together. Whole streets in the towns from which these men had come were devastated on 1 July 1916, some losing almost all of their menfolk in a few hours. Within weeks, the Australians, newly arriving from Egypt after the Gallipoli campaign, would also be thrown into the fray on the Somme, first as part of a diversion at Fromelles, and then at Pozieres, with equally catastrophic losses.

Looking back with the benefit of a century of hindsight it is often curious and unfathomable to we, observing the events across the passage of time, as to why whole regiments of men followed their orders without dissent, and left the relative safety of the trenches as their officers’ whistles blew, to quite literally walk into the path of the German machine gun and artillery fire pounding No Man’s Land. Sure, some wavered, froze in fear, or had to be forced, and a small number were shot as cowards for refusing to attack. But the vast majority responded to the order to go over the top without question. A major study undertaken by Australian historians during the 1970’s, at a time when many veterans of the First World War were still living, sought to answer the question; why? Why had so many enlisted, voluntarily – conscription (compulsory military service) was introduced in most of the combatant nations, including Britain, during the First World War, but never in Australia, which remained an entirely voluntary army throughout the duration of the war. Why had those who enlisted responded to the orders of their officers, seemingly without much hesitation or complaint, even as the casualties mounted, on the first day of the Somme, and on other occasions? The single most common response, by a large margin, is captured in a single word – ‘duty.’ It was widely accepted by those who enlisted that it was their duty to volunteer, to defend ‘the Empire,’ and once there on foreign soil in uniform, to obey the officers and military hierarchy. This was an all but universal sentiment.

The prevailing mythology, fuelled by popular culture and the natural disposition of suspicion toward authority in the Australian character, is that the Great War was all ‘a lark,’ an adventure, embarked upon by spirited young Australians who wanted to see the world and somehow prove their worthiness, and that of their young nation, on the battlefield. There is some of truth to this, but such sentiments are dwarfed by the reasons reported by veterans for their own enlistment, and by the language and ideals present in the speeches, sermons, and newspaper columns of the day. At the time of the Great War (1914-1918), most Australians really did feel a strong attachment to the ideal of the British Empire, and believed the ideals ‘the Empire’ had fostered, and brought to the great southern land, really were worth defending, and even dying for. These ideals were things such as the Westminster system of government, democracy, the rule of law, freedom of speech, and the Christian faith in which each of these had been nurtured and from which they had sprung. Like Kitchener’s volunteer army in Britain, the vast majority of the men who volunteered for the Australian Imperial Forces felt it was duty to do so. It was part of the ‘social contract’ that made a society possible – the voluntary sacrificing of some rights and of one’s inherent self autonomy for the greater good, including the imperative to be willing to join with others in defending that which sustained and protected those very rights and that very self autonomy. 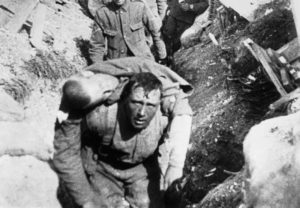 The notion to do one’s duty is not heard as freely today, whilst other incentives to enlistment, prevalent at the time, such as a devotion to British imperialism, and the call for sacrifice and more sacrifice, are certainly casualties of the conflict and rarely heard today. There is, of course, a strong case to question the notion of duty, especially unquestioning duty. On any measure, the Somme was a disaster that ought never be repeated. And yet, there is cause also to ponder if, in discarding many, if not most, or even all, of the social values for which those who left their trenches on the first morning of the Somme one hundred years ago thought they were fighting, has left us a better, or more advanced, society. It would seem there is a case to argue that the Western world, in most of its global expressions, could well benefit from a renewed sense of gratitude for the Enlightenment values that were so freely expressed as being common and unifying at the time of the Great War, and further, that a sense of duty to preserve them, even at the cost of personal injury or death, might well be beneficial and for the common good.

One would never argue for a return of the misguided military strategy that saw lines of young men walking over No Man’s Land to certain injury and / or death. But I would be willing to argue that one legacy we might owe to the men who paid that price, and who made that sacrifice, one hundred years ago, is a rediscovery of, and a renewed commitment to, the sense of duty to the values of the Enlightenment values of democracy, freedom of speech, and the rule of law, that they so widely and comprehensively believed to be strongly in the interests of their own social world, and, importantly and significantly, of those who would come after them.

The Right Reverend Dr Bradly Billings is an Assistant Bishop in the Anglican Diocese of Melbourne, Australia. He has recently published ‘For God, King and Country,’ a study of the Anglican Church and Community during the First World War.