Oxfam is at it again, continuing its grand annual pre-World Economic Forum tradition of releasing yet another report designed to incite socialist frothing over the supposed grave injustice of wealth inequality. 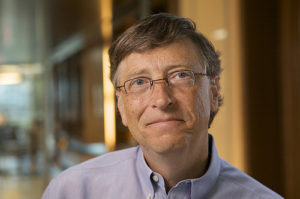 As per usual, the chief targets of criticism are the richest of the rich – just eight men in this instance. Headed by Microsoft founder Bill Gates, this select group has a combined net worth of $426 billion, equivalent to that of the so-called poorest 3.6 billion people in the world.

Naturally, the report’s release has had the desired effect, with left-leaning media outlets and virtue-signalling keyboard warriors alike all too quick to lap up and regurgitate the anti-capitalist propaganda (not to mention the fact these eight richest are all, conveniently, men – patriarchy!).

But even ignoring the wonderful irony of the crucial role Facebook and Windows have played in spreading a message directly attacking the likes of Gates and Mark Zuckerberg, there are a few inconvenient truths that seriously undermine Oxfam’s suggestion that such a state of affairs is “beyond grotesque”.

For starters, Oxfam’s labelling of those 3.6 billion people as the world’s poorest is misleading. In measuring wealth as net worth (i.e., assets minus liabilities), the report rates debt-laden individuals in Western societies who are living comfortably and have good economic prospects as being in a worse financial position than Third-World beggars without a cent to their name – hardly a relevant means for determining a person’s financial position in global terms.

Such a measure also ignores the fact much of the wealth held by people such as Gates is largely unusable given it is currently tied up in stock that would become worthless were it to be liquidated.

The reality is, though, that neither of these points really matter given the most inconvenient truth off all: wealth inequality itself doesn’t matter. Whether the wealthiest 10, 100 or 1000 people in the world control the same wealth as the bottom 1, 2 or 4 billion people is largely irrelevant as far as global poverty goes.

Why? Because to believe wealth inequality is inherently bad is to reject the basic concept of wealth creation. It is a worldview that treats global wealth as a zero-sum game where those who get rich can only do so at the expense of others.

This is a worldview that ignores basic economic realities. In generating billions in personal assets through the creation and growth of Microsoft, Bill Gates has not deprived anyone of anything. Had he not founded his company, the poorest of the poor would be no better off.

What’s more, the success of companies such as Microsoft has enriched the lives of the billions of people around the world who benefit from their products and services and the hundreds of millions of workers in countries such as China and India who have found a way out of poverty through gainful employment.

It’s true some of these companies have come under fire in the past over working conditions and wages that would appal Western standards, but such conditions are often a necessary part of the transition away from failing agrarian economies. What’s more, the fact such conditions are able to exist at all shows they still present a far better option than the alternative.

Of course, that is not to say we should not ultimately strive for better working conditions around the world, nor is it to say there aren’t ever any losers in the global spread of capitalism. Donald Trump’s successful march to the White House was largely driven by his support from disgruntled rust-belters who have found themselves unemployed as a result of manufacturing industries shutting up shop and moving abroad in search of cheaper labour (though the role of thoroughly un-capitalistic measures such as excessive corporate tax, industry regulation and trade union influence shouldn’t be overlooked as a major factor in this upheaval as well).

But the reality is, the world as a whole has never been better off. As capitalism has spread, it has inevitably been accompanied by net gains in prosperity. For the first time in history, worldwide extreme poverty is now below 10 per cent.

The fact that Bill Gates has a proportionately bigger slice of the pie than ever before means little considering how much bigger the pie now is. And as the wealth creators are given further opportunities to expand their business interests through more and more countries embracing capitalism and free trade, that pie will only continue to grow.

For an organisation such as Oxfam, ostensibly devoted to eradicating global poverty, this should be cause for celebration rather than scorn.