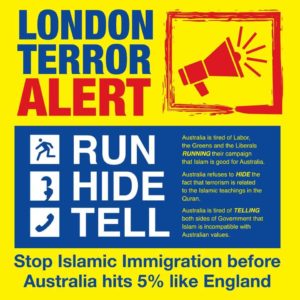 After the recent London attacks the Metropolitan Police advised citizens with a snazzy infograph to “Run, Hide and Tell” if people for some random, totally undeterminable reason decide to carry out a terrorist attack.

Hanson twisted the infograph and posted her own version, mocking it while calling for a reduction in immigration from members of a particular religious group.

Apparently everyone disagreed, or that’s what you’d think if you believed the media.
Hanson was “Slammed” and “Slammed” again for her “Crass“ and “Dangerous“ Opinions which had apparently caused an “Outcry“.

It seems that everyone in Australia disagreed with this evil red head and her evil opinion of evil.

Except, you know, the actual people.

But what do they know? Most of them don’t even have an arts degree!

How dare she not just send her condolences and talk about the bravery of the first responders, strength in the face of adversity, the necessity of community coming together and not letting “them” [whoever “they” are] divide us?

How dare she suggest something different that might actually work?

Clearly just like last time, the woman is out of her mind. The stress of the full on assault that parts of the establishment have been unleashing on her and those around her these past few months has addled her brain. No more than can be expected, the old dear is getting on in years and surely must be going senile.

Thankfully, even more so than the last time someone let this demented old bag loose on social media without her pills, our brave leaders and intrepid journalists have again come together in a spirit of unity to put the old hag back in her box.

Bill Shorten proclaimed in his most sing-songy-est voice that Hanson’s comments were “disgusting and inappropriate…Within hours of this happening we have people using this for crassest of politicking.”

Labor MP and totally unbiased objective bystander Anne Aly joined in: “To come out straightaway and use this for political gain is absolutely disgusting and not something to be encouraged.”

Greg Barton, the anti-terrorism expert whom ABC and Sky keep dragging out to say the same things after every new attack, added his voice to the chorus: “Pauline Hanson and others of that ilk undermine our security” he intoned, without actually trying to explain why; maybe he thought it was obvious.

The wanna-be leader of the Greens, Sarah-Sea-Patrol Hanson Young, took to Twitter to rant: “Pauline Hanson’s misappropriation of police warning for her hateful politics is despicable.”

Also taking to Twitter was the seriously creepy looking Kon Karapanagiotidisomething, the CEO and founder of the Asylum Seeker Resource Centre, which campaigns to keep our borders as open as possible. You could almost see the tears creeping down Kon’s chubby cheeks as he squealed “You are truly an awful, awful human being!”

But the cake, the knife and the table were taken by the Christmas man himself, actual leader of the Greens Richard Di Natale: “Pauline Hanson’s response to the indiscriminate violence we have seen in recent days in London, Egypt, Kabul, Iraq and Manchester are a calculated intervention to promote her own agenda of division and hatred… It’s intended to generate controversy so I won’t add to it except to say that using these violent and hateful events to further her own political cause speaks volumes about the person she is.”

Considering that all these people have spent the last three months gloating about how Hanson is finished and One Nation is falling apart [despite all the polling to the contrary] you have to wonder why she seems to spend so much time living rent-free in their heads.

The truth is that they have no answer to her call for a reduction to immigration; there is no argument against her, bar invective. She’s right and they know it.

Despite all the undoubted missteps she and her advisors have made in running their party, they remain the only people talking about the issue of immigration in a field crowded with weak-willed, small minded fools.