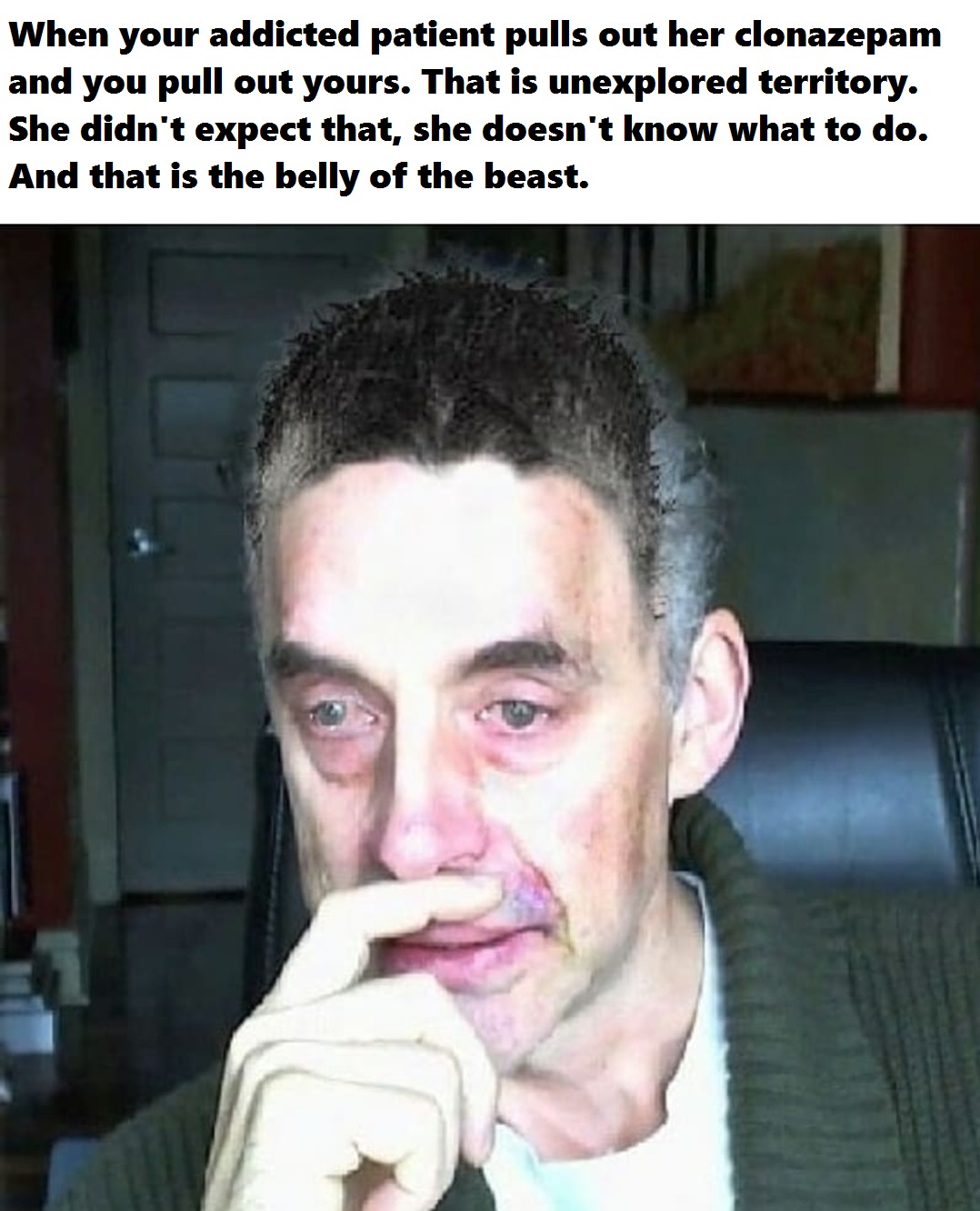 I was not surprised when I heard the news yesterday that everyone’s favorite authority for being a man in the modern world has checked himself into a clinic due to severe depression. Jordan Peterson has been suffering from obvious pathologies in the public sphere for some time. His demented book about 12 rules for life is an incoherent descent into the nightmare of a man who is so off the charts that he is forced to create specialist rules in order to continue functioning in an outwardly normal manner.

Peterson doesn’t pat cats in the streets because he’s a nice guy; he does it to continually convince himself that he is a nice guy.

How does checking yourself into a mental unit impact a professional career based upon guiding people on dealing with everyday life? It can’t be that good. Even worse if the reason for checking in is somewhat narcissistic.

The “12 Rules for Life” author has sought help trying to get off the anti-anxiety drug clonazepam, his daughter Mikhaila Peterson said in a video posted to her YouTube account Thursday.

“I’ve never seen my dad like this,” the 27-year-old diet blogger said in the eight-and-a-half-minute video. “He’s having a miserable time of it. It breaks my heart.”

The elder Peterson, 57, began taking the addictive medication to deal with stress from his wife’s battle with cancer and other health problems earlier this year, his daughter said.

He tried to quit cold-turkey over the summer after his wife, Tammy Roberts, “miraculously” recovered from complications with a kidney surgery, Mikhaila said.

So his wife is battling with cancer and he loses the plot and gets addicted to medication? The only person who would have any reason to get addicted in this situation would be the wife. But in Peterson’s world it’s all about him. The man is weak, both physically and psychologically. Then again, he is just following his own rules. Take your pills, he said.

How could you guys fall for this? I know that a good number of you were on my side when I publicly took Peterson to task, but there were many more out there who blindly stood by their false prophet while attempting to rain fire and brimstone on me. Don’t get me wrong; I can take the heat. But don’t you feel just a little bit stupid now?

The fact is that we all face difficult times in our lives, but it is those times which define us as men. The last year for me personally has been without a doubt the most difficult of my life, and I’ve been through some shit over the years. I had some bad days, some very dark and foreboding days. But his wife gets sick and instead of supporting her like a man he gets addicted to pills and checks himself into a mental unit? What a joke. What a complete and utter joke. I bet the underlying reason why his wife is still with him is the guilt she would feel if she left and he inevitably topped himself.

The man is an insane weakling who suffers from moments of intense clarity. That he managed to sell you on his crazy rules for living the life of a lunatic reflects more on those who took him seriously than it does on him. Yesterday I wrote on the importance of thinking for yourself and now this happens. People, people, people. Wake up and stop listening to the charlatans of the world.

But that would require real effort, wouldn’t it. Far easier to lap up the offerings of the latest guru than to really dedicate yourself to becoming a man worthy of the name. Did you get all weepy when he was bawling his eyes out on stage? Did you dream that you could go on a private retreat with your guru to the woods where you could whip each other with birch twigs, howl at the moon and discover your true masculinity while confessing your childhood sexual fantasies for your grandmother?

Peterson is done. But maybe there’s still hope for some of you. Repent your sins of idolatry and admit your real weakness was in believing this obvious fraud. For in believing him you reveal yourselves to be just as weak as he.