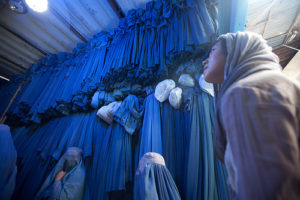 Every day we are bombarded by new assaults in the realm of cultural warfare. We have to deal with the cognitive dissonance of progressives championing the most oppressive ideology – islam, while simultaneously denigrating Western culture’s foundations.

I propose a new paradigm to consider these apparent absurdities which I hope will provide clarity in terms of understanding and predicting the discourse which we must collectively endure.

Simply put: It is about oppressed v oppressor. And the progressives side with the oppressed.

In the context of suffragettes, civil rights, gay rights and other movements of the 20th century, there is a very high correlation between the oppressed being liberated by the progressive actions of cultural liberals championing libertarian ideals.

In the West we now have a situation whereby the most oppressed group tends to be the emerging alphabet of identify politics “victims” or migrants.

For the former, self proclaimed identity category and claim of victimhood is an automatic entitlement to “oppressed” status, and rallies the progressive circus to the cause. Although this may now often impede the liberties of the masses and “trigger” regressive outcomes, such as self censoring and freedom-from-free speech, the mental entanglement is simply too great.

Weakness in Western society will also qualify you as a victim – which means you are oppressed – perhaps by capitalism or white privilege or whatever. Ask a psychologist – there is no shortage to claims of what is to blame for your oppression. Therefore, what makes Western society successful is what must be crushed to make victims less oppressed – which is a disturbing intellectual starting point for progress(ives).

Moving on to the migrant topic, a migrant need simply demonstrate weakness and victimhood to qualify as oppressed, and this is endorsed by the UN and its puppets. Therefore, the progressives simply must fight for your rights.

And the most oppressed people on earth tend to be Muslims. It is why Muslim countries are rapidly becoming global citizens – with the right to qualify for asylum anywhere in the world. This is because their countries are truly oppressive in general.

The reason they are truly oppressive is their core beliefs being based on a dreadfully oppressive text and ideology. When they land in the Western sphere, the media are poised for any opportunity to show how oppressed they are and therefore in need of progressive assistance. If a border oppresses them – down with borders. If pork oppresses them, halal is the solution. If shaking a woman’s hand oppresses them, or a woman’s indecent dress… well – down with oppression!

Were they to truly be progressive, they would do well to fight for women’s rights and gay rights and civil rights in the face of Islamic rule. Heck, even Turkey would be a great place to start. But it is not safe to do so.

The irony is that in the future, the progressives will be fighting all these battles back here in the West if they champion the oppressed. The future intellectual battle grounds will be full of victims and of the oppressed.

That the progressives are heralding a New Age of Oppression at home in the West, of the West, is a sad indictment on something wrong in the media, the academic institutions, the public debate and the liberal minded social justice warriors of the West.