Well, it’s come to this.

Here at the Deaprtment of Inequality Studies, I am in my office from 10-2, Monday to Thursday. Well, actually one hour of that I’m out at lunch. It can be a slog.

This week, it was even harder. Some ‘people’ e-mailed cartoons to me while I was out at lunch. I don’t know who it was, but judging from the crude, childish art style I would say they are from the Melbourne School of Fine Art. As soon as I find out who they are, they are gonna get a nasty call from Tim Soutphommasane, let me tell you!

Now, as you know, I am not afraid to re-print anything. (To revise my earlier statement, I don’t reprint cartoons of Mohammed, but that’s not due to fear. That’s due to respect for that wonderful, saintly prophet and the wonderful millions of innocent followers he has, who do not deserve to have their hearts broken and be slandered.)

Here are two particularly egregious cartoons which I was forced to look at without a trigger warning this week. 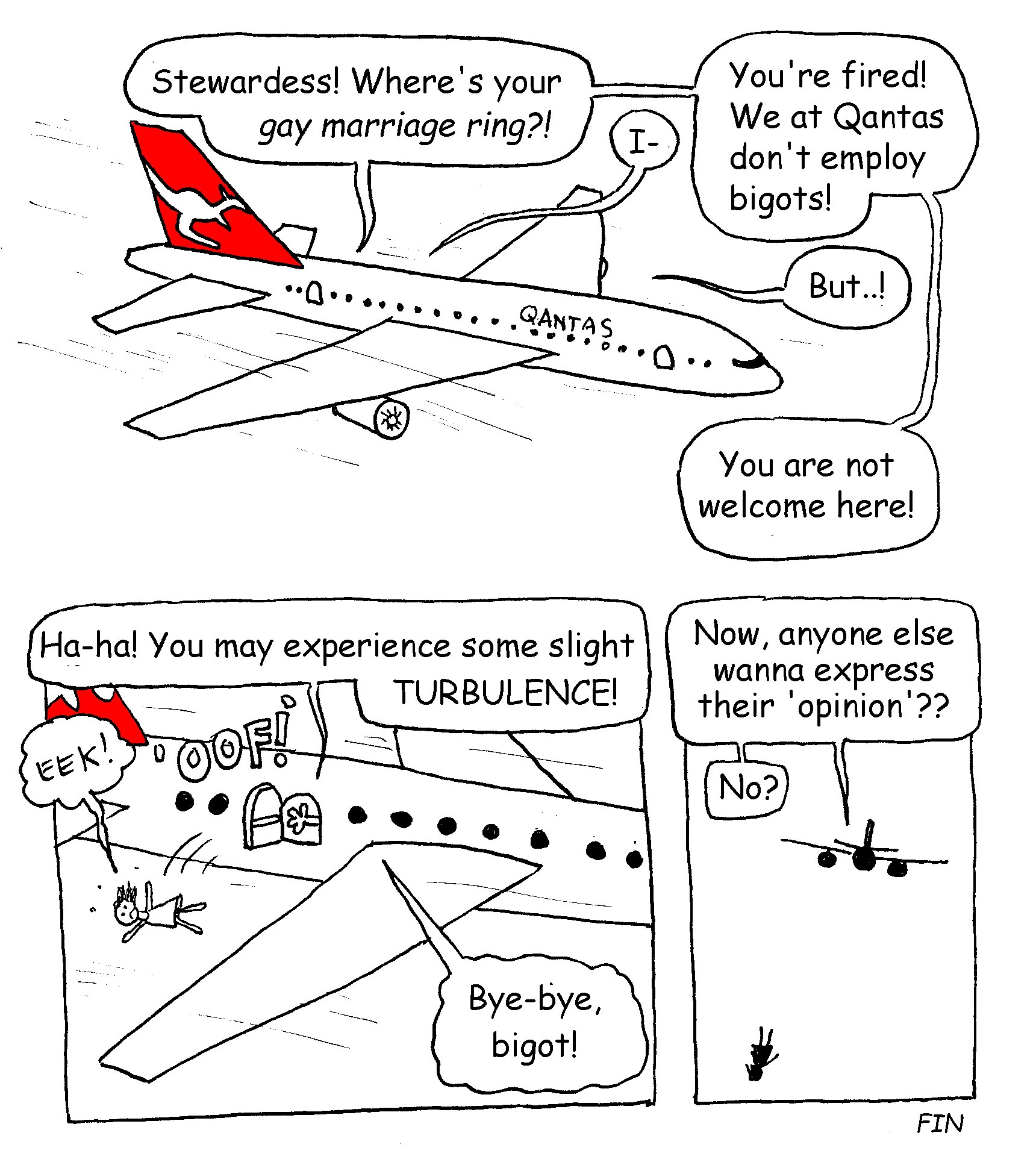 It seems to me that these cartoons are both implying that Qantas, a dauntless warrior for the cause of marriage equality and ‘human rights’, was somehow restricting free speech by forcing its employees to wear black rings on their fingers. The implication is that employees who do not want to wear the ring will feel obliged to do so at the risk of losing their job, not being promoted, or being ostracised by their peers.

I’m like, wow. How could anyone arrive at such an illogical conclusion? Paranoid much?

Let me set this recod straight! Qantas employees, as well as the employees of Fairfax, ANZ, Google, Airbnb and all other friendly, harmless corporate citizens are totally free to support marriage equality — as they should — by wearing these rings. If they don’t, probably due to being a reactionary bigot or morionic simpleton who is lucky to have a job at such a prestigious, wealthy corporation, they are ‘free’ to leave and work somewhere else. Yeah, don’t let the door hit your buttocks on the way out! Besides, there are loads of jobs around! Getting a new job is probably easy as pie, even for the intellectually stunted!

Thus there is thus absolutely no pressure on any employee to wear the black ring or not wear it! As if! Besides, from my own experience here at the Department of Inequality Studies, I can tell you that all people who work here think the same way anyway. I don’t see why it would be any different at Qantas.

We’d better bombard Qantas with letters, e-mails and Tweets of support. They have to know that they are on the right track with this ‘forcing employees to wear the black ring’! Please cut and paste this and e-mail it to Qantas, adding your own name at the bottom:

We applaud your decision to make your employees wear a black plastic ring on their finger until same-sex marriage happens in Australia. It’s much better that big corporations like yours bring about this kind of change with unusual gimmicks and an expensive advertising campaign that costs several times more than most average Australians will make in a lifetime. That will make it far more ‘real’ than if the people voted for it in a plebiscite.

I think it’s really important for big corporations to get involved in social engineering. If not a rich, partly foreign-owned corporation, then who? I’m struggling to answer that one. So don’t let anybody tell your that you should be focusing on flying aeroplanes! Not at all!

We really, really believe that you are not denying your employees freedom of expression, or encouraging the ostracism of employees by other employees. We really, sincerly believe that. Really and truly. It’s definitely not ‘Orwellian’, as some people have said, nor does it set a bad precedent about freedom of speech and thought. I don’t see why anyone would feel ‘compelled’ to wear the ring. Pff! As if! There are no ‘overtones’, sinister or otherwise! It’s all perfectly normal and harmless! And we reject those who are now calling Qantas ‘the Flying Kangaroo… Court’. People who say those kinds of things are wrong. They should be silenced and punished with fines or imprisonment.

(Cut and paste your name here.)

PS: I’ve noticed that the airports at which your planes land still don’t have transgender toilets. When is that gonna happen? May I suggest you distribute a purple ring to your employees, to be worn alongside the black one, until you pressure all airports in the world to be refitted with correct toilets?