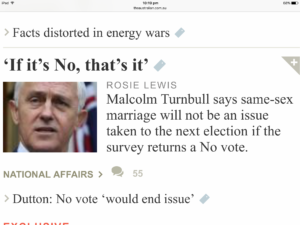 Fair readers of The XYZ, how well do you trust this headline?

“Turnbull says same-sex marriage won’t be an issue at next election”.

Do you find this opening sentence credible?

“Malcolm Turnbull says same-sex marriage will not be an issue at the next election and his government would not try and change the law if the Australian people return a No vote in the postal survey.

In the Australian’s defence, they are merely reporting what Malcolm Turnbull said. But..

“In comments that will appease Coalition conservatives, the Prime Minister ruled out taking a new policy to the next poll in the event of a No vote after Immigration Minister Peter Dutton urged the government to resist future attempts to change the law if a majority of participants opposed redefining marriage.

“Mr Dutton said a No vote should signal “that this matter is at an end for the Liberal Party” and there would be no change to the Marriage Act.”

Do the people currently heading the Liberal government have any concept of how the left operates? (Do the editors of the Australian really think Turnbull can do anything to appease conservatives, true conservatives?)

This isn’t a matter of whether or not the Liberal Party wants to make same-sex marriage an issue at the next election.  What matters is that the left never stop. They will never, ever stop. They have said time and again that gay marriage will be an issue until it is dealt with. The wording of the Yes vote slogan is based exactly on this concept: Let’s get it done.”

If the No vote wins, the left will keep pushing for same-sex marriage, to get it done, to deal with it.  And they will never stop.

“Like children having an epic temper tantrum they just want to destroy everything. There is no stopping them by stopping an isolated act; one thing just continues to another.

“The only way to stop this cycle is to do something about them. Not their acts, but them. But we’re not prepared to do that. We talk about things going too far but we’re never really prepared to actually go too far ourselves. And so it will continue.”