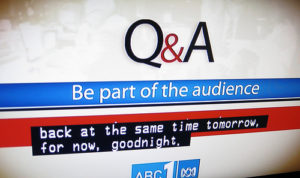 Tonight was big in Australian political media. Pauline Hanson walked into the mother of all snake-pits, in the form of an episode of Q&A on their ABC, with an audience and panel naturally stacked against her. Surprisingly then, XYZ Quote of the Day doesn’t go to anything said on air, but to Omar Hassan, the organiser of the protest outside the studio against Hanson’s appearance on the show:

Mr Hassan said he was not a Muslim, and organised the rally because he believes Q&A promotes rightwing voices and, “there’s never anyone from the progressive left”.

You read that correctly. Somebody out there believes there is never anyone from the progressive left on the Q&A panel.

Moving right along, how do you think Pauline Hanson fared? Do you think she held her own? Was she intelligent? Did she get called out? Did she win the argument?

Was the panel and audience reasonable toward her? Do you think she furthered the cause she speaks for, or harmed it?

Let us know in the comments. Seriously, go for your life.