Gazing upon my physical appearance of dark olive complexion, urban themed attire and general ghetto demeanour, one might assume that I have a natural hostility towards law enforcement in general, and particularly certain officers who may lend themselves towards racist tendencies. This however could not be further from the truth, and though I have had some undesirable interactions with Police officers in the past, I maintain a firm level of respect for them as there are very few in our society who could, should or would take on the monumental task that they perform tirelessly and somewhat thanklessly day in, day out.

If I lived in a neighbourhood racked by crime – which I kind of do – and had the option of having law enforcement officers who were either racist or incompetent, I would unflinchingly choose to have my community policed by the dastardly, redneck, small-minded racist over Officer Sugar-Plum Fairy any day of the week.

Racism is not a problem.

Yes, you read that correctly, and it comes from a half-black ethnic from the northern suburbs. It’s an unnecessary irritant that displays a feeble mind of the person it emanates from, but it’s hardly in the category of biological weapons proliferation on the black market. I’m more worried about snakes or mosquitos than I am about racism. Racist slurs tend to be self-defeating outbursts with their only merit being shock value, and as with all ad-hominem attacks, they instantly degrade the deliverer more-so than the recipient. Anyone in our society who feels emboldened or superior for making such slurs or holding such sentiments is sadly mistaken if they think that they can be taken seriously for doing so.

Now imagine the unleashing of such unhinged nonsense from a public servant who is almost permanently in the public gaze, and subject to the highest level of scrutiny imaginable from outsiders. It would not only disgrace them and make them a social pariah, but it would have the added effect of shaming the entire force, call standards and recruitment into question, and undoubtedly facilitate a plethora of unnecessary knee-jerk reactions from the media and political classes, which would in turn diminish morale and the effectiveness of police to combat crime.

This is why I’m not concerned about the possibility of a racist slur from a Police officer, be it an off the cuff remark or expression of a strongly held belief. He poses no real threat to my person or my community unless he deliberately involves himself in some kind of unwarranted violence which is another matter entirely. If I really wanted to I could retaliate by pulling out my phone and engaging in a counter outburst before uploading it to one of the many anti- Police/ anti-law and order sites or Facebook pages. The media would go into a frenzy and the wider Police force would go into meltdown trying to curtail the madness which would ensue. It’s almost as if our society is permanently poised to degrade and disrupt any effort to maintain a harmonious, peaceful and lawful populous.

In short I have a great deal of control over the situation and the consequences are potentially catastrophic for the Police officer making a racist slur. The backlash over such a slur would, of course be disproportionate to the crime, while the damage that can be caused by a polite, well meaning, cowardly police officer can be far more disastrous. Nothing illustrates this with more clarity than the case of Muslim grooming gangs in places like Rotherham, Oxford and other British towns. 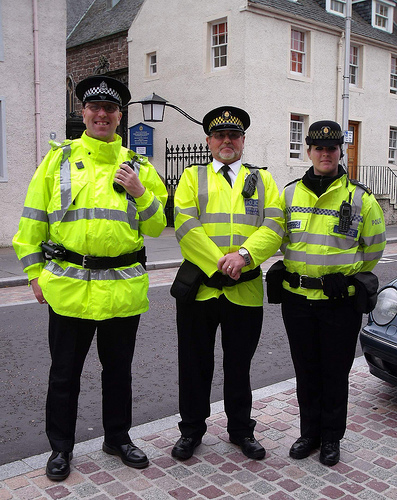 Earlier this year Britain’s National Crime Agency stated that their Rotherham investigations may reach a new phase of complexity as more of the alleged offender’s trials approach, and that they believe that up to 1500 young women have been sexually abused by the grooming gangs. As Alex Jay’s damming report concluded, the authorities had received reports of the abuse and refused to act upon the information provided, because of concerns over cultural sensitivities and the possibility that their application of the law may perpetuate the notion that Pakistani migrant men can be sexual predators.

Essentially, after repeated calls for them to enforce the law, these authorities chose to ignore heinous acts of sexual abuse which included underage girls, for over 16 years, out of fear of being called ‘racist’.

I try to imagine myself living in a town like Rotherham during all of this. I would not have to worry about a policeman treating me unfairly or calling me a nasty word. I’d have to constantly be worried that I could be the victim of a violent crime which the authorities are clearly willing to turn a blind eye to, depending on the perpetrators. I would probably be viewed by young girls of the town with fear and apprehension simply because my appearance is similar to the gangs of untouchable rapists that infest their community. The worst part of this being that the fear and apprehension of these girls would be thoroughly warranted, as how can they have any certainty that I’m not one of these sub human cretins?

It was common knowledge what ethnic background these animals were. I’d be living in a town where the rule of law had diminished, and a sense of community along with it. Imagine the level of apathy, distrust and hostility among the people, and resentment towards the police. This form of policing – rather lack thereof – poses a threat to my person and my community at large. This is something that I would have little to no control over. This is an issue where it seems I could do my best to make it public but my calls to action would fall on deaf ears.

No-one in the political or media elite seem willing to understand the breadth and depth of this issue, particularly as it raises serious questions about Muslim supremacy among British Muslims.