This is the closing line of George Orwell’s novel, 1984.

Our hero, Winston, lived in the totalitarian state of Oceania, a state so complete in controlling every aspect of its citizens’ lives that it even ran the resistance movement. Falling foul of the system, Winston is not just arrested by the state but broken utterly, until he not only accepts but welcomes his punishment. He loves Big Brother.

All good and well, right, for it is only a novel; none of it is true and Orwell wrote it as a warning, not because he was a forward-thinking futurist with predictive powers.

Yeah. Of course he was. 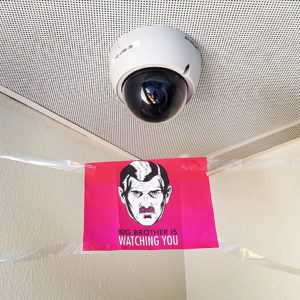 In February, Google, a group already capable of controlling distribution of information via the subtleties of its search engine, launched an AI program named Perspective, capable of detecting ‘abuse’ in online comments forums. This is clearly a ‘good’ thing, as it will help to cut down on hate speech and toxic comments. Organisations like The Guardian and The New York Times are listed as being part of the testing programme.

In order to create this programme, it was forced to study a multitude of user comments that human moderators had already deemed unacceptable. Unacceptable to whom, exactly? Moderators at The New York Times. So yes, that all seems fair and even-handed, and there is no way groups such as that would ever be accused of shutting down dissenting debate by simply deleting entire comment threads they disagreed with…

Also this February, the Writing Centre from the University of Washington, Tacoma, issued a press release stating that ‘pressure to conform to proper American grammar standards perpetuate systems of racism.’ So rather than trying to consider why some socio-economic-racial groups have different standards of education, or putting forward suggestions for raising the bar, the solution here is to just accept that some people don’t talk good like.

The Vice Chancellor of this university, Dr Jill Purdy, backed this statement, as academia needed to help fight back against racism. It was, in her words, ‘a great example’.

It is also bemusing to note that while the intent was to not prejudice groups of a lower educational level for their lack of linguistic ability, the author of the press release saw fit to throw in such lines as ‘a result of the pervasiveness of racism’, ‘presence must be acknowledged on a systemic level’, and ‘proposed that only through the acknowledgment [sic] of structures of racism could they begin to be dismantled’.

Yeah. Good luck in fully understanding that on first pass if you dropped out of high school early. While this does show the double standard of elitist snobbery often entrenched within higher education, in that we can safely assume that everyone associated with this act of self-congratulation have been and will continue to be happy using their full vocabulary without guilt, by declaring lower grammatical standards to be socially acceptable, one is also implying that higher standards are not required. The extension is that language should be deliberately simplified in order to promote a sense of inclusion and/or prevent thought-crime.

Another part of the world created by Orwell was the two-way televisions – telescreens used by the state to monitor their citizens. While being a horrifying concept to anyone who read the book last century, many current-generation console owners already have systems similar to this within their living rooms. While your author here confesses to not being completely up to speed on the details involved in this technology, your author also believes that console gaming is for people who can’t spell WASD and that console gamers deserve everything they get.

Nevertheless the fact that this sort of technology already has a toehold within our homes is just another part of a disturbing trend – acceptance.

The population is a strange minded-thing. A government policy, especially one put forward by someone like that mean and nasty Tony Abbott, suggesting increased anti-terrorism powers for law enforcement, is normally met with protesting cries about the reduction of Human Rights and invasions of privacy. However many of these same people, when faced with a simple accusing statement telling them their profile is not yet complete, will happily surrender their past secrets to social media platforms. Who you were with? Where you were at the time? What you were thinking? Sure, that can go on Facebook. Tag it and Like it, what could go wrong? They have a privacy policy so no problem with any of that data ever being collected by any organisation for their own purposes now, is there?

There was a time when one would look at such dystopia-style books such as 1984 and wonder how a society could allow themselves to be as completely subjugated as they were portrayed within the pages. Surely some massive social overthrow must have occurred and the controlling changes inflicted on the population by force. There must have been some sort of resistance, some sort of push-back movement that was crushed into failure long before the novel’s timeline started.

That is what we used to think.

These days, we are getting to a stage where we are forced to rethink this mindset. These days, when the Oppression finally comes, it wont be resisted, it will be embraced.