Allow me to present a blurry photo of an advertisement / tourist information picture, seen on the London Tube. It’s really blurry. But it is really important: 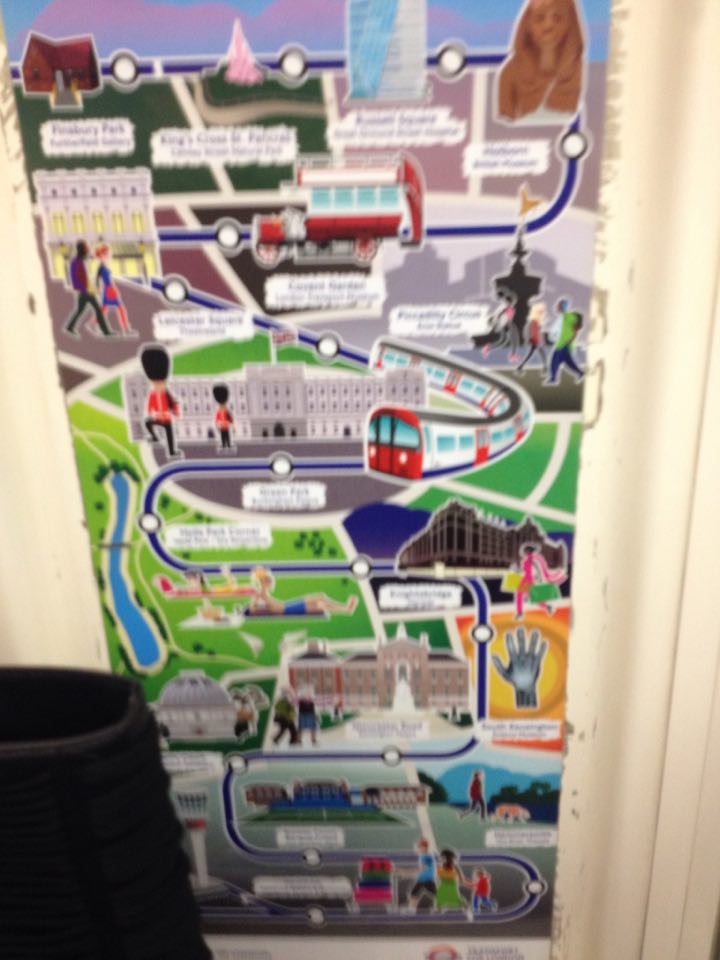 This picture shows a path / trainline winding through London, highlighting various London locations and the stations that will get you there.

At most locations, people are hurrying about their business. Like the city of London itself, the people represented in this tourist guide appear to be of a diverse range of vibrant backgrounds – we see native Britons, Africans, and “Asians”, one each of whom are hurrying about Piccadilly Circus near the top right.

We know native Britons are now a minority in their own capital. You want to red pill a few of them by rubbing it in their faces, go ahead.

But look a little closer at my blurry, amateurish photo, and you will notice something else. Two individual native Britons (or are they Poles) are sunbaking in Hyde Park. Great. Wouldn’t want to show the Asians doing that. Might provoke an acid attack..

A black woman is shopping at Harrods. Actually, she appears to be hurrying away, carrying shopping bags. Is that racist….

So far I am still just stirring.

What really caught my eye was the couple near the top left at Leicester Square, and the couple at the bottom, on their way to Heathrow. Both are mixed race. The jet-setters even have a little one in tow. The artist obviously made sure he was painted a hue half way between that of his parents.

Why can’t the artist show young white couples, and young black couples?  There’s nothing wrong with that.  Is there?

This is why I have gone from not caring about a subject like this, to really caring.  People meet foreigners all the time, fall in love with them, and have babies. It is normal.

But the message conveyed in this tourist info guide or whatever the hell it is, is everywhere.

The narrative that dominates Western academia, education, government, and the creative arts, is that because white people killed each other in such great numbers during the Twentieth Century, the only way to avoid another world war is to finish what the world wars started, and eliminate white people.

Import migrants by the millions. Suppress white birthrates. Actively promote miscegenation. Everywhere.  Once you realise what is going on, you see it everywhere.

I know. 1300 years of existential threat from the caliphates; 270 million murdered by Islam; millions enslaved by brown people; the Mongol invasions; the fact that perhaps our white forebears killed each other in such great numbers because they were unfortunate enough to be smarter than everybody else, and developed the most destructive weapons first, and were unfortunate enough to turn them on ourselves.

They honestly believe we should cease to exist.

This is why we need to ensure the survival of our people and a future for white children. Because now, even something as innocuous as a London tourist guide is a weapon.