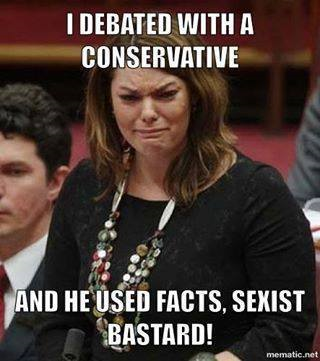 In the ongoing war between men and women, set up and waged by misandrist harpies whose hobbies include vomiting, mouth breathing and socialism, a new low was reached this week in the Australian Federal Court where a white knighting judge has taken it upon himself to stand up for the poor wymens everywhere, thus validating the importance of the UN Convention for the Elimination of all forms of Discrimination Against Women. Or as I put it yesterday:

What the convention actually means is that no woman anywhere must ever suffer any inconvenience, particularly as a result of her own actions.

To see that in action we turn to former Australian Senator David Leyonhjelm whose off the cuff comments in parliament have landed his target a cool 120 grand.

Senator Hanson-Young launched defamation proceedings against the former Liberal Democrats senator claiming the comments portrayed her as a hypocrite and misandrist, or someone who hates men.

So a casual remark in the chamber to this woman, (and I use that term extremely loosely), is now considered defamation. There was no accusation here, no attempt to slander Sarah of the Hyphened Last Name. It was merely a suggestion on his part. But the judge thought otherwise.

Mr Leyonhjelm said he had made his comments in response to her saying words to the effect that “all men are rapists” during a parliamentary debate about women and violence last year.

However, Federal Court judge Richard White said he did not accept that Senator Hanson-Young had said those words, which meant Mr Leyonhjelm’s defence of justification failed.

Mr Leyonhjelm did not need a defense of justification to win this case. He merely needed to demonstrate truth, as truth is a complete defense to any defamation claim. If Sarah Sea Patrol did make the claim that all men are rapists then the rejoinder to stop shagging men is not only true but perfectly reasonable.

I contacted one of the more brilliant and good looking lawyers in Australia on this subject and he had the following to say:

The simple, common-sense view on the comment below is that it is obviously not defamatory – but merely a light hearted retort. Otherwise, a very low bar has now been set for what is defamatory.

But where the defense of the poor wymens is concerned the bar cannot be set low enough. Back to the article:

Justice White said it was likely Mr Leyonhjelm “‘heard’ that which he was predisposed to hear by reason of his pre-existing opinion of the applicant as someone who made ‘collectivist’ statements”.

In other words, the white knighting Justice White took it upon himself to reinterpret the mental processes that Mr Leyonhjelm may or may not have had in order to come up with some sort of bizarre justification for slanderous intent on his part.

The other issue here is of actual damage caused. What damage did Hanson-Young receive that would justify 120K? There is no actual damage in an rejoinder to stop shagging men. She can then either stop shagging men or not. And if as a result of the exhortation to stop shagging men is received there is an inference that the object of this instruction is shagging men, how is that defamatory? Or have straight white men fallen so far in the realm of public analysis that merely the suggestion that someone might be shagging one is now verboten in the minds of all good people? Perhaps the damages received as a result of Mr Leyonhjelm’s comment are for the awful accusation that Hanson-Young might even have considered for a moment to lay down with horrible men.

The fact that this offhand comment has made its way to the Federal Court would suggest that it was well aimed and hit home. But the left don’t take well to accurate public put-downs, hence the overloaded response.

The judge also found that the former Liberal Democrat senator’s defence of statutory qualified privilege failed and that he was “actuated by malice in that he published his claim … to a mass audience with the intention of publicly shaming her”.

It is no longer legally allowable to shame women for their public behavior. In other words, any criticism of a woman designed to limit her behavior is now slanderous under this decision. How can it be otherwise? Where are the limitations? This decision is beyond absurd but we live in a feminist matriarchy that is hell bent on eating its own.

Hopefully Mr Leyonhjelm is up for a fight as he can appeal this decision to the Full Court of the Federal Court (3 or more judges) and then potentially to the High Court after that. If he doesn’t take it further then one must assume that he simply does not have any pluck. And a man without pluck is not a man that women would like to … well, you know what I mean. One must watch what one says now, particularly around the wymens.