It’s time to have a serious talk about liberals, not just the lunatic left, but the useful idiots across the liberal spectrum. There’s something about the responses I’m seeing on social media this week from luvvie leftists and liberals alike that really chills me, and that’s the complete, almost unadulterated joy with which they are celebrating the arrest and sentencing of Tommy Robinson.

I’m referring to the likes of progressive commentator, Owen Jones, and his merry band of online lemmings whose multiple Facebook posts read like a veritable Writer’s Guide for partisan opinion, misdirection, appeals to authority and outright slander. In this case, because of their outright hatred of the man, Robinson’s detractors have suddenly become experts on British law, and the norms surrounding sentencing hearings. 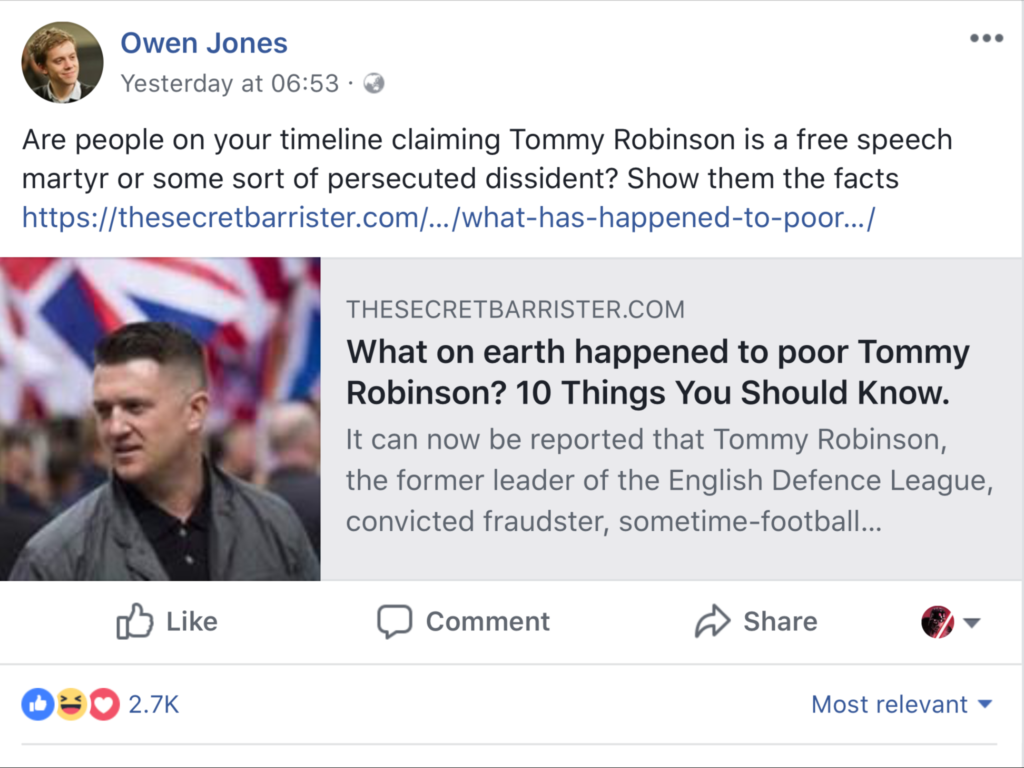 The issue that liberals keep forgetting is that the issue of whether or not Tommy Robinson is genuinely a raycist or not is irrelevant. This is not about the man, but about the circumstances behind his arrest and the injudicious application of the Law by UK authorities determined to silence an activist whose political opinion they dislike.

But the Left has a problem. Its adherents are trapped in a liberal ideology of group-think and group identity, in which no time can be spent considering the hypocrisy of their beliefs. Those deep in the bubble are incapable of the one genuine emotion that I believe separates good people from sociopaths, and that is genuine empathy for the individual. Instead what I see from the bandwagon on the left trumpeting for Robinson to be locked up for good, and goading any that would stand up for him in public, is exactly the same mob mentality that through the ages would cause a crowd to watch a beheading, baying for blood at the sight of “The Other” rightfully receiving his or her just desserts.

They cannot conceive of Robinson as an individual, he is simply representative of an unacceptable group not worthy of their consideration.

It’s reminiscent of the 2-Minutes-of-Hate moment from Orwell’s 1984, only it’s 2018, and social media has descended into 2-Days-of-Hate and counting.

Those who are genuinely concerned by his arrest from both sides of the political spectrum are not blinded by partisan ideology, but see a UK legal system that will vigorously prosecute the letter of the law in Robinson’s case, but will turn a blind eye to all manner of far worse crimes, including the truly shameful episode of Muslim child grooming gangs that prompted Robinson to incur the original suspended sentence in the first place; a justice system that is terrified of stepping out of line when it comes to Islam.

With the benefit of hindsight, I believe Robinson was imprudent in his reporting. That may not make me popular, but knowing he was on a suspended sentence, and being intimately aware of the way UK law enforcement has treated him in the past, my gut feel is that he thought he would ride his luck and that were something to happen outside the courts, he would receive a nice bit of publicity from it. I think that he underestimated the response from both the police and the sentencing judge, and was genuinely shocked to be taken away in the paddy wagon.

But this should not detract from the draconian way that the D-notice was issued, nor from the fact that the sentencing was handed down within hours without affording him reasonable representation.

To the loudest detractors and newly-graduated legal experts and civil liberties gurus on the Left I ask, Do you not understand that were the events of last week to have happened to a journalist/activist of the approved Leftist political orthodoxy, the intelligentsia and media darlings on TwitBook would be up in arms at the outrageous miscarriage of justice applied? Do you not see the hypocrisy?

There are so many permutations to this, but were the ethnicities of this case reversed, were an activist Muslim reporter to be arrested and locked up for perverting the cause of justice while covering the trial of a group of white men suspected of grooming underage Muslim girls, all hell would break loose. Leaving aside that the police or courts would never dare to do so, the response from the media darlings as well as the Muslim community would be one of complete outrage. But Tommy Robinson is fair game because he doesn’t meet the requisite characteristic of a victim – he is “The Other”.

And now we come to the most important point about this case, and one which the idiots on the Left cannot see past due to the lies and misinformation spread about Robinson in the mainstream media over the past few years; this case is starting to resemble the show trials prevalent in early decades of the Soviet Union.

When Stalin purged the Leninist and Trotskiyists from the Politburo after Lenin’s death, he did so to consolidate his power, and remove dissenters. The man responsible for oiling that particular machinery of the Soviet State was one Lavrentiy Beria, the psychopathic head of Stalin’s Secret Police, the NKVD. It was the NKVD who turned up in the middle of the night to bundle political dissidents, Christians, foreigners, basically anyone who at a moment in time was deemed to be unsuitable, into the back of a car and driven to gaol.

Hundreds of thousands of the loyal party faithful were rounded up and put through show trials in this way; having been tortured for weeks, imprisoned, starved and beaten, the accused would “confess” his or her crimes of treason, and would be executed or shipped off to the Gulag for ten or twenty years. As Solzhenitsyn makes clear in The Gulag Archipelago, there was no justice and no due process, just an endless brutal crackdown on anyone who didn’t conform to the prevailing orthodoxy.

Beria himself is famous for the quote, “Show me the man and I’ll find you the crime”, a notion that perfectly sums up the sort of justice system prevalent in the UK right now.

The Law has become political.

Robinson’s original crime of ‘mortgage fraud’ that the critics obsess about as being proof of his bad character, was nothing more than the one technicality which the authorities could pin him on, despite turning his entire life upside down for months on end, raiding his home, and spending thousands of police hours investigating his business and personal dealings. As Douglas Murray eloquently stated in a speech given in 2017 discussing the hypocrisy of the case, it’s almost certain that the police could have charged certain prominent Muslims in the UK with a similar minor offence, but for the lack of political will to do so. It hasn’t however stopped the Left from commencing every article written about Robinson in the past few days with the moniker, “Convicted fraudster, real name Stephen Lennon, was arrested …”, because a convicted fraudster has no credibility.

Show me the man and I’ll find you the crime.

Robinson’s only real crime to date is speak out against radical Islam, one for which he has been found guilty of and arrested. The philistines on the left are either too dishonest or too blind to understand the ramifications of this matter; as they while away their hours in a self-congratulatory circle-jerk, glorying in the silencing of their political opponents on social media and imprisonment for wrong-think, it pays to remind them that the wheel turns. When it’s their turn to be slandered, menaced and rounded up by the Thought Police, I wonder who will speak up for them?