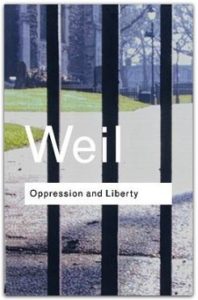 Born out of conversations with a friend from the United States, I was given the opportunity to read a compilation of fragments and essays written by Simone Weil called: ‘Oppression and Liberty’. The compilation flows in chronological order and presents some of Weil’s thoughts on anthropology, economics, politics, ideology and war.

Simone was a French intellectual. Like Jacques Ellul, whom she presumably never met, Weil worked in the French resistance and was well schooled in Marxism. Among many others in the elite French communist circles of mid-20th century, she was a contemporary of rebel and excommunicated member, Albert Camus.

Later in life, Weil matured back towards Roman Catholic Christianity, taking an interest in asceticism and Catholic mysticism. Detaching herself from the French intellectual trends of her day, Weil also made a break with Marxism. Whilst remaining a fan of Karl Marx, Weil set alongside her criticism of (crony) capitalism an intense critique of Marxism, detailing the threat posed by plutocrats and bureaucrats when they choose to entertain and ride the backs of both monsters.

Unpacking this threat is the recurring theme of ‘Oppression and Liberty’. Weil makes it known that she is no fan of big business or big government. It’s more apparent in the latter than the former, but both big business and big government form big bureaucracy. This creates a “bureaucratic caste” and is dangerous because “all exclusive, uncontrolled power becomes oppressive in the hands of those who have the monopoly of it.” (p.15)

Readers wouldn’t have to look far to locate examples of where big business and big government corroborate to create big bureaucracy. Some corporate promotion and imposition of new cultural laws such as those posited by radical feminist ideology, punishment for disagreeing with any forced imposition or disloyalty to the LGBT flag and the questioning of the movement’s agenda; weapons factories, political groups, career politicians, Islamist shar’ia, some parts of the institutional Christian church, pharmaceutical, oil and power companies, information tech companies and, the education and military industrial complexes, all provide adequate proof.

From an historical point of view, it’s easy to see the beneficial relationship that developed between industrialists and “Captains of industry” with the rise of National Socialists in Germany, Europe and America throughout the 1930s. As is shown by Thomas Doherty in his 2013 book ‘Hollywood and Hitler’, European and American corporations did their best not to upset the newly established status quo. It could be argued that this is one of the contributing factors to Winston Churchill being so highly criticised for speaking out against the “gathering storm”.

Additionally, the Soviet nonaggression pact with the Nazis also gives further credibility to Weil’s conclusions about how big government and big corporations create big bureaucracy. Stalin had imperialist ambitions. Hitler was a way to implement them. Hence the Soviet attack on Norway on the 30th November 1939, three months after the Molotov–Ribbentrop Pact (23rd August 1939) between the Nazis and the Soviets was signed. This gave parts of Eastern Europe to the Soviet Union and opened commercial ties with the Nazis.

Weil is right then to say that:

“The bureaucratic machine, though composed of flesh, and well-fed flesh at that, is nonetheless as irresponsible and as soulless as are the machines made of iron and steel.” (p.13)

“The ‘bureaucratic machine excludes all judgement and all genius; it tends by its very structure to concentrate all powers in itself. It therefore threatens the very existence of everything that still remains precious for us in the bourgeois regime […] Instead of a clash of contrary opinions, we end up with an “official opinion” from which no one would be able to deviate. The result is a state religion that stifles all individual values, that is to say, all values.” (pp.15 & 16)

For Weil, bureaucrats, like (crony) capitalists, can become parasitic. They receive benefits by causing damage. The three main areas Bureaucrats operate in are “Trade Union bureaucracy, industrial bureaucracy and state bureaucracy” (p.16). The working-class only exist as pawns, even in the “hands of trade unions” (p.26). The worker and the poor are putty in the hands of the revolutionists, who utilise the hope that revolution inspires, unaware that “fanning revolt to white heat can serve the cause of fascist demagogy” (p.21).

This last point then leads into her much larger criticism and separation of Karl Marx from Marxism, which is something I don’t have room here to delve into. Very briefly, Simone applies Marx’s critique of power structures, including Marxism, stating, “All power is unstable; there is never power, but only a race for power – the quest to outdo rivals and the quest to maintain” (p.64). This is the black hole of greed, the “aimless merry-go round” (p.65) which the lust for power drags humanity into.

Weil concludes that all monopolies (centralised power) are a leading cause of oppression. This might surprise some, but her conclusion aligns with capitalist economists such as Milton Friedman, Thomas Sowell and Hayek, all of whom see and saw monopoly and big government as a being a restriction on the free market. There are of courses differences between them on this, however, the object of their concern is the same. For the latter group, monopolies are oppressive to the free market, for Weil monopolies are oppressive to people. Despite this difference, they are essentially saying the same thing because economics is about people. There is no free market without people, who are free to operate responsibly within it.

My only point of real disagreement with Weil in regards to this subject is her position on Nazism and Socialism. For Wiel, Nazism was not socialism, and attempts to bring National Socialism into the Marxist framework are “vain” (p.7).

This is contrary to the well-defended conclusions of F.A. Hayek, George Reisman, Jacques Ellul, Roger Scruton, and Richard Wurmbrand. All of whom present National Socialism and Communist Socialism as branches of Marxism.

Simone seems to have her own definition of what Socialism and National Socialism are.

“The orientation of the Hitlerite masses, though violently anti-capitalist, is by no means socialist, any more so than the demagogic propaganda of the leaders; for the object is to place the national economy, not in the hands of the producers grouped into democratic organizations, but in the hands of the State apparatus.” (p.7)

On these points, genuine capitalists would agree that the economy should be in the hands of producers grouped into democratic organizations. Genuine capitalists understand that capitalism without compassion is not capitalism. Greed strangles the life out of the free market. This is one of the reasons that in the West, Frank Capra’s 1946 movie, ‘It’s a Wonderful Life’ remains the number one film of all time.

Not because people long for a socialist revolution, but because they understand that a market weighed down by monopolies, big government and big business is not free. It is instead chained to the aimless merry-go-round of big bureaucracy where the bureaucratic caste do what they can to outdo each other and maintain power.

‘Oppression and Liberty’ was a surprise. It wasn’t something I had planned on reading, but am thankful I had the chance to. Simone’s work isn’t easy to read. ‘Oppression and Liberty’ sometimes comes across as lofty and too complex, which is very much a reflection of her schooling in French intellectual circles. That, however, doesn’t subtract from Simone’s sincerity or the insights that this compilation of fragments and essays offers.

This article was originally published at www.rodlampard.com.