The left has a knack for picking their future opponents. They are better at it than most conservatives. Like sheep catching the scent of a wolf, they can spot a man on the right who will give them no quarter and won’t even think of trying to signal their way. The tactic is always to discredit their future opponent well in advance, hence Tony Abbott was dubbed the “mad monk”, Peter Dutton is currently being compared to a potato, and Donald Trump was, and still is being subjected to the most extraordinary disinformation campaign of all time.

In Blair Cottrell the Australian left sense not simply a man who will present them with a formidable opponent, but a man who could fundamentally transform Australia and reverse the regressive leftist policies inflicted on our people for decades.

Who can blame them?

Hence they have dispensed with the preliminaries and gone straight to calling him a “nazi”:

We’ve come not to expect much from the nocturnal programming at @SkyNewsAust — but featuring a neo-Nazi with a history of crime and violence is a shameful low. It also highlights how extremists are being dangerously accommodated by sections of the Australian media pic.twitter.com/NUffO2DbXQ

Tim Wilms at the Unshackled has provided an excellent summary of the contents of Blair Cottrell’s appearance on Sky News last night, and how it caused a complete meltdown by Australia’s far-left elite:

“Adam Giles asked Blair Cottrell about his activism and views. Cottrell stated he was a person who simply stated what people are thinking but are made to feel afraid to say and that Australians as a whole are a proud people. He set forth his views on immigration that we should only accept skilled migrants and who are culturally similar to Australia such as white South African farmers. He gave a scathing critique of the current political class on the issues that matter. He also promoted the Lads Society and the services it aimed to offer the community.

“Cottrell has had a chequered history due to criminal convictions for arson and stalking and statements attributed to him supporting Adolf Hitler. Despite his past, he has still risen to become the main face of patriotism in Australia. His relaunched Facebook page has over 18k likes and has 24k Twitter followers.

“Almost immediately after the segment aired on Sky News, the leftist social media went into meltdown with the hashtag #Nazis trending on twitter. Leftist media personalities and politicians led the triggered bridge and expressing outrage that Sky News could give a platform to a neo-Nazi.”

It was wrong to have Blair Cottrell on Sky News Australia. His views do not reflect ours. The interview has been removed from repeat timeslots and online platforms.
– Greg Byrnes, News Director

As Matty’s Modern Life has demonstrated, Blair Cottrell is not a national socialist:

He is however kryptonite to the left, as demonstrated by his media performances:

Just for good measure, here he is protecting children from degenerate street “art” in Melbourne:

Thus why the Australian left has determined to no-platform and unperson him: 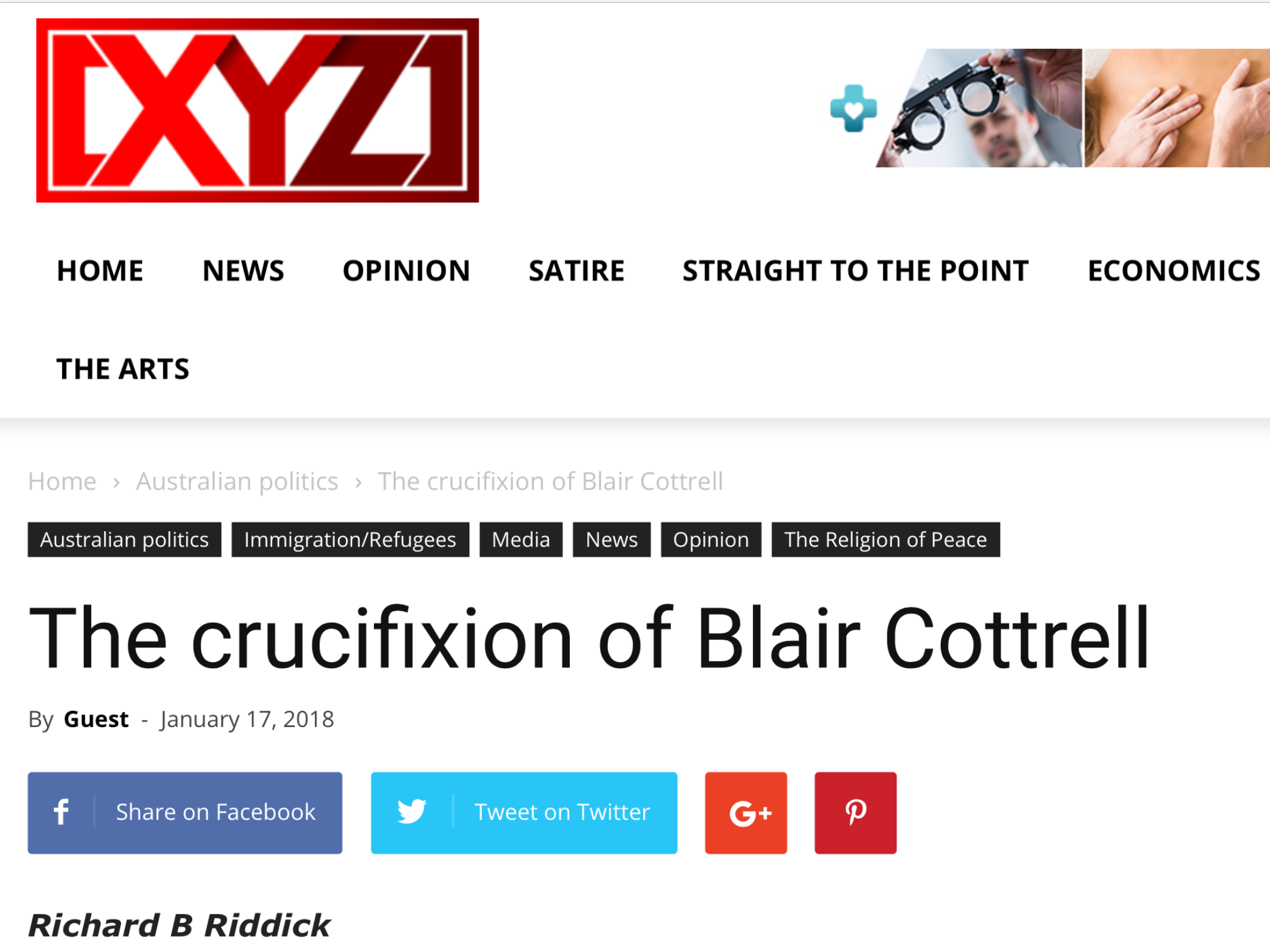 “Blair holds views that are not presently allowed and importantly are dangerous to the status quo, because he is able to remind the wider population that we didn’t always have to step between “diversity bollards” whilst shopping, and we as a people didn’t always have to advocate for non-citizens at the expense of ourselves.”

Stan even made an entire television series from scratch in order to seed fear in the minds of the general population about Blair. Like I said, they pick their opponents, often years in advance:

Lucas Rosas has done a tremendous job for The XYZ and the Unshackled highlighting the double standard exhibited by the media regarding political extremism. Some so-called journalists such as Jason Wilson have links to violent anarchists, if not being anarchists themselves. Time, after time, after time, far left journalists will refer to the terrorists who brutalise conservatives who dare to speak publicly simply as “protestors”, even though they know full well the terrorists’ links to communist and anarchist organisations who hate everything about Australia and want to destroy it.

And then there’s Pigentine Pig:

David Hilton has even pointed out that a network of communist journalists and academics work together as the terrorist entity Slackbastard, which openly incites violence against its political opponents.

The Culture War is an Information War, and Australia’s mainstream media is actively engaged in fighting on the side of Cultural Marxism against the interests of everyday Australians. Blair Cottrell is one of the most effective weapons against the Cultural Marxists, thus why these very same Cultural Marxist “journalists” are actively attempting to deny him access to a mass audience. There is only so long the left can hold out against him, and against our broader assault of facts, reason and evidence against their emotive and manipulative cries of “social justice”, and the stirring of Australia’s spirit which men like Blair can evoke.

On that note, if things go according to plan we are hoping to have Blair on The XYZ Livestream tomorrow night at 9:15 AEST. You will find us at Matty Rose Live.