So it looks like the Chi-comm Muslim lizard aliens from another dimension finally rogered Roger. 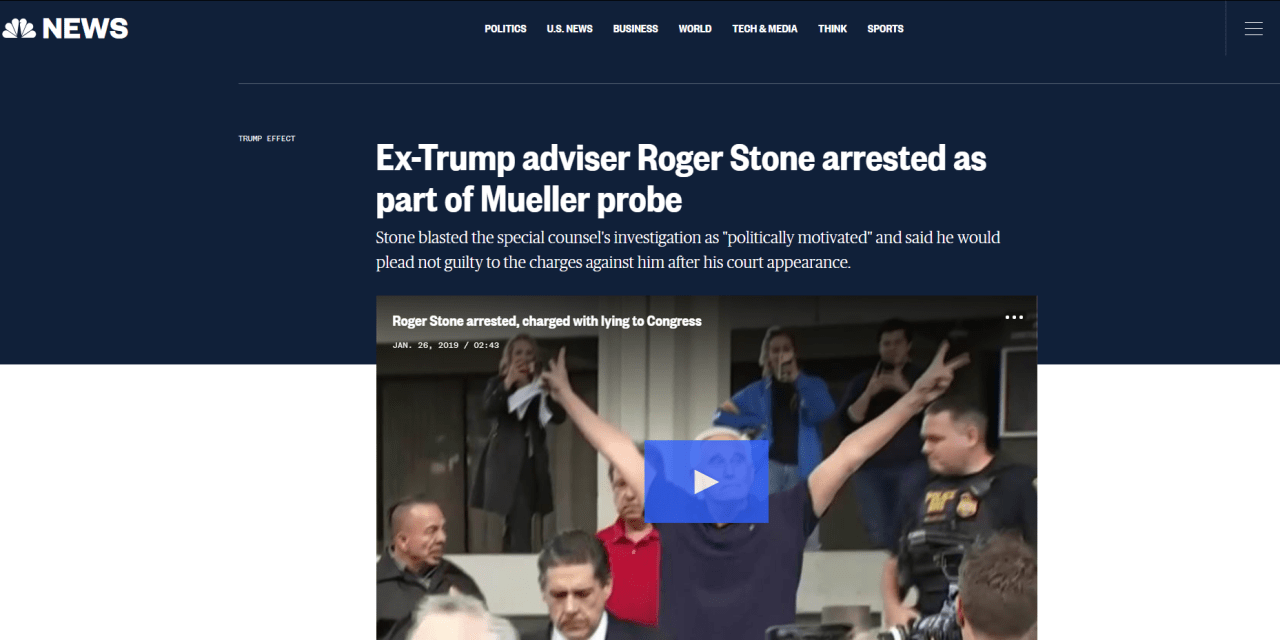 I’m guessing they weren’t the first though. 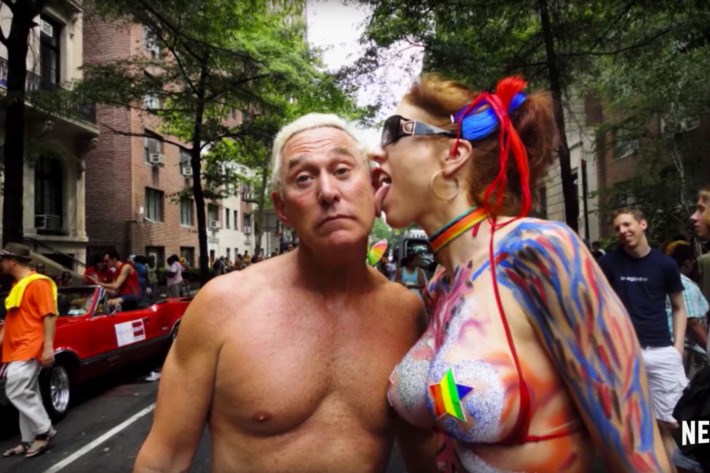 He’s just a gud Jewish boi who dindu nuffin. All this is an anti-Semitic plot cooked up by Soros and crooked Hillary to stop the Q revolution people.

But the thing is, this isn’t a rumour of sealed indictments or a meme spread through 4chan.

Stone was arrested by federal agents. He’s been charged with making false claims to Congress. He’ll be facing federal prosecutors.

Meanwhile Jerome Corsi, who worked briefly for InfoWars between 2017 and 2018, has been receiving ongoing monthly payments of $15000 even after he stopped working for the organisation. Mueller’s investigators are now focusing on whether these payments were hush money to ensure Corsi stayed on script and didn’t contradict Stone’s version of events regarding Trump’s election victory in 2016.

Wait! Lyin’ Jerry Corsi said yesterday he was fired by @infowars_com last week after the @washingtonpost made inquiries about the absurd idea that @real_alexjones was paying him “hush money” a ridiculous and baseless Jerry himself started! In fact Lyin’ Jerry was shit-canned in JUNE of 2018 after his epic drunken meltdown at a DC restaurant. When will Lyin’ Jerry stop Lyin’ ?

That’s explosive. If the Mueller investigation can prove that InfoWars has been paying Jerome Corsi to keep his mouth shut about information which Roger Stone has said under oath, then someone is going to jail.

AJ would be sweating bullets right about now.

The problem for AJ is that, because Mueller’s investigations of Corsi and now Stone relate to their time as employees of InfoWars, federal prosecutors could well be able to seize financial records, communications and any other information they wish from InfoWars. Just like they did from Roger Stone.

If they do that and there is just a speck of dirt in InfoWars’ dealings, AJ is going down.

And this is where it gets really interesting.

Jones told the Austin Statesman last week that InfoWars rakes in 45 million dollars each year, but due to censorship will only bring in 30 million this year.

Think about that for a sec.

Let’s break this down. The supplements sell for about $20. Let’s be generous and say there’s a 50% profit margin. That’s $10 a pop, which means AJ sells 4.5 million bottles of supplements a year.

No way. That makes AJ one of the biggest pharmacies in America.

It doesn’t add up.

There is only one of two possible explanations for this. Either AJ is lying about how much he makes, or he’s lying about how he gets his money. Given that AJ knows that InfoWars’ financial information will become public sooner or later, my money is on the second explanation.

Which leads to another question.

More than two years after Trump’s election victory, nothing has come of WikiLeaks. Hillary’s not locked up. The Podestas are still free to attend their pizza parties. The swamp creatures that Trump promised his desperate base he would drive out from Washington are cozier than ever.

Even Queen Anne’s had a gutful.

Ann Coulter says “lunatic” Donald Trump should face a 2020 primary by Republicans if he doesn’t build the wall https://t.co/CjMdjU1691 pic.twitter.com/Xq5IjLFrY5

It’s turned out that all Trump represented was a change in optics. A change in style. We went from the highly-scripted West Wing of the Obama administration to a reality TV presidency instead. And nothing changed.

The common thread which runs through all sizeable and well-funded alt-media platforms is that they’re Zionist. Whether it’s the Jewish-founded Breitbart, Jewish-run Drudge Report, Jewish-controlled Daily Wire, Jewish-owned Rebel Media, Christian Zionist-owned World Net Daily or various Jewish and Christian Zionist social media content creators, all of them push the same ideological line and attack anyone who disagrees with it.

They focus on George Soros but never mention fanatical Jewish Zionist billionaire Sheldon Adelson’s financial takeover of the Republican Party and support for the Trump presidency.

They never cover that Obama’s top five donors were Jewish or that 19 out of 20 of Hillary’s top donors were also Jewish.

The controlled alt-media will tell you none of this, because according to AJ, the Arabs are taking over.

They obsess about the anti-liberty doctrines of Islam and the possibility of a future Islamic Caliphate, yet never cover Jewish supremacism and the belief of orthodox Jews that, once their messiah arrives, we goyim will be put under the Noahide Laws and Christians will be put to death for idolatry.

They cover Chinese espionage and technological prowess but never expose that Israel has been caught repeatedly selling US tech to other countries, including China. Alex Jones himself has even gone so far as to say that Hollywood and the US media are controlled by China.

Anything to prevent people from seeing the truth about which foreign power has hijacked America’s democracy and turned the West into a golem for an ethnostate of lunatic racial supremacists who hate and look down on us as subhumans.

The Zionist controlled alt-media always pushes us to worship Jews and hate Muslims, as though either standpoint is in our interests.

Israeli scientists say they have complete cure for cancer. The team says its treatment ‘will be effective from Day One.’…

Strategists in Israel in the 70s and 80s outlined a plan for Israeli expansion which required that Israel’s problem of angry Muslims become America’s problem. They’ve carried out that strategy perfectly by hiding Israeli atrocities in the region, conducting false flags and amplifying and confecting how Israel is such a ‘blessing to the nations’.

Look at this evil Jewish soldier physically assaulting a poor and old Muslim woman. She even took her belongings away,…

Always the victims, blameless and perfect.

Israel has nothing to do with us, yet we are being pulled into yet another war to bankrupt the West and embolden our enemies. More dead Aussie boys for someone else’s imperial dream.

The controlled alt-media is there to put us in echo chambers, make us angry and then misdirect that rage at scapegoats and strawmen. While the Zionists prepare for their massive war in the Middle East to establish Greater Israel, we are distracted, shouting at each other.

Ripe for the takedown.

So many of us have been fooled so many times before by these false binaries and bogus dialectics. Thankfully, however, we now have the internet. Why they let us have it, I don’t know. Maybe they thought they’d be further along with their plans by the time it came in. But like the explosion of faith, knowledge and human flourishing which followed the printing press, the internet has the capacity to be a powerful tool for true human liberty. If we use it wisely.

There are many alternative sources of information which you can turn to instead of the controlled media and alt-media complex. None of them are perfect. Some are only good for one or two topics. Here are just a few, in no particular order.

If you want to learn who really did 9/11 and why, check out Ryan Dawson and Christopher Bollyn on YouTube. They’ve got the goods. If you’re a Jesus-botherer like me, TruNews is an excellent source for authentic information from a Biblical Christian standpoint. If you’re interested in geopolitics, Maurice Herman is a Pom who lives in rural Cambodia and every day goes for a walk to share his thoughts with his audience. Good info, but a bit too pro-Islam for my liking sometimes. If you want to learn more about Zionist control of America, Know More News is the go-to source. Israeli News Live gives outstanding information on the true nature of Judaism, from a Jew who became a Christian. And if you want to track the Australian housing apocalypse, Economy Times and Mike Martins are good value.

That’s just a quick list. Do you have any other recommendations? Let us know in the comments.

The people who control the media and the alt media understand human psychology at a level far beyond our comprehension. They understand how ideology, identity and community impact upon a person’s thoughts. They know they are ripping the fabric of our societies apart. That’s their plan, to keep control.

To succeed, they need to lie and manipulate and cover up. They need to maintain the darkness.

Don’t let them. Choose the light of truth.