Well, the MSM were correct. Having the audacity to allow a predominantly (at least for now) Judeo-Christian society to democratically put an issue that impacts on Judeo-Christian values, along with the values of many other religions including the religion of peace, to bed once and for all with a vote, has opened the floodgates releasing a torrent of intimidation, hatred, and vile abuse.

But at the time of writing, even though I have many religious or conservative Australians on my social media feed, I’ve yet to see any fire and brimstone posts about the ‘abomination of men laying with men’ or even any posts in disagreement. Make no mistake. This by no means is an indication that 100% of Australians are on board. Or even 50%. I used to mistake silence for agreement, but not anymore.

A safer assumption is that as history repeats itself, Christians are again hiding in caves under persecution from the Romans, and progressives are playing the fiddle while the decadent empire of Rome burns. We’re on the cusp of a very aggressive limited nuclear exchange on the Korean Penninsula, and these people are bogged down on the rights of a community whom like 99% of us live as literal Gods compared to your average North Korean.

All of the Plebiscite hatred is one way traffic from a left fork in the road. I’m sure by now you’ve all been seeing Facebook demands for those who intend to vote against, or not vote at all, to kindly disassociate themselves. To delete themselves. Even the undecided are not acknowledged as lifeforms in the worldview of the progressive. Intimidation and threats of being ostracised should one have the audacity to disagree, or even admit that they haven’t yet decided are going around more readily that Candy Crush invitations. 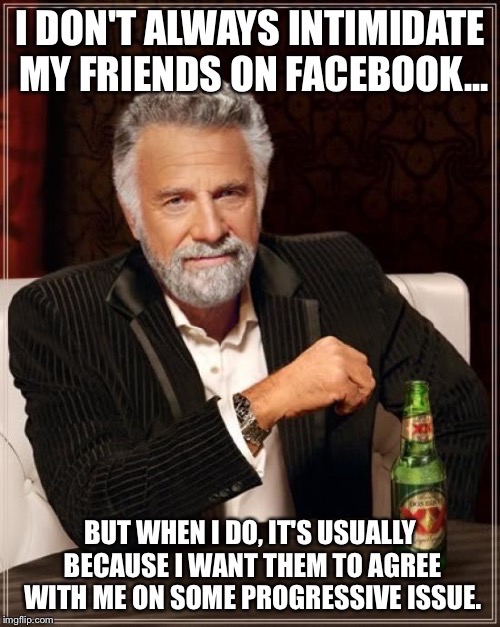 Sounds very much like the hatred that progressives warned about in the event of a vote. I thought love was love. No matter what. Even if friends or family members disagree with you. I have news for those fully prepared to estrange themselves from family members over a ritual that is already pretty much approximated by perfectly acceptable secular same-sex civil unions anyway.

Every time you spew intolerance on a public post, or post thinly veiled threats yourselves, the marital aspirations of a fairy dies. Why do you think that Christians are being so cagey and silent on social media? These people are used to being told they suck. They know how bad it looks trying to push ideology onto the otherwise impartial. They know that telling people to believe in God or they’ll destroy them not only doesn’t work, but sends creeped out heathens rushing to the embrace of the other side. It doesn’t matter whether that God is Yahweh, or Karl Marx.

If you’d asked me pre-Facebook if a vote on SSM would get up, I’d have given it better than average odds. Now, I’ll be incredibly surprised if it passes. The people in your Facebook feed have exposed the venom in their hearts, and have mortally wounded their own position just as they did during the U.S. election.

These people could easily win hearts and minds of they weren’t so damned sociopathic and lacking in awareness. They have all the resources, but are doing the opposite. They are actively breaking hearts and unwittingly red pilling minds. Christians are way better at winning hearts and minds. And they know when to take a vow of silence at times like this.

Expect a lot of people who are undecided to turf their postal vote in the bin. Expect a resounding no. Expect a lot of post-plebiscite soul searching from the soulless. People who will blame the ‘great unwashed hi-vis bogans’ until the cows come home without realising that if they’d merely extended an olive branch and said ‘hey, I know we disagree on a lot of things, but can you do me a solid?’ instead of ‘think like me or you’re done!’, then all their rainbow filtered dreams would have come true.

I’m not urging anyone to vote yes or no. That’s personal and I respect that. But I will say that this isn’t about equality, but more so whether or not you’d like to embolden these thoroughly repellant social justice types by allowing them to win a few more yards in a culture war where the mission objective appears to be little to do with equality in its purest form, and mostly about refusing to leave you or I the hell alone.