If you think Brenton Tarrant is a hero, you’re a piece of shit. He’s a coward, and he’s now made the demographic, cultural and moral restoration of Western civilisation even more impossible to achieve.

If you think that the destruction of our society, our way of life, our heritage and our faith is going to be stopped by random acts of violence against civilians then you’re borderline retarded.

This is an ideological struggle. A spiritual struggle. And today, our enemies are jubilant. They’ve scored a massive victory. 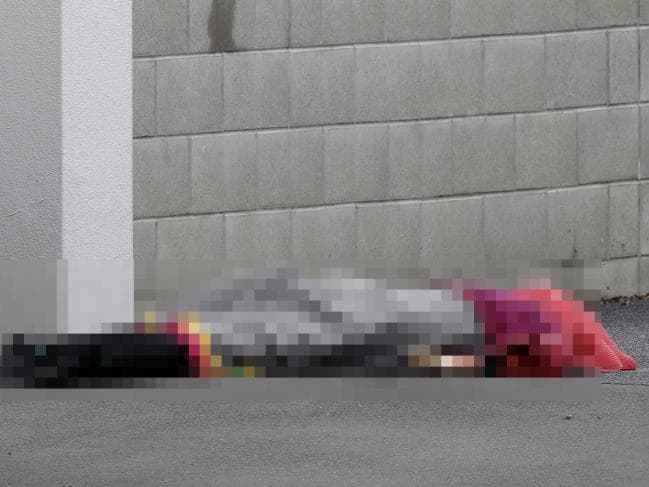 That’s someone’s mother. Someone’s sister. A 5 year old boy was in that mosque. He’s with Jesus now. Another little boy was shot in the street while he ran away.

We’re not them. We’re not terrorists. We’re not murderers. This is the path to defeat. Those people in that mosque weren’t our enemies, and now their deaths have ensured the public will continue to support the hegemonic worldview of the elites who engineered this race war in the first place.

After today we are weaker, and our enemies are stronger.

When the social engineers and world improvers first pushed for mass, non-white immigration into Western countries five decades ago, they weren’t naive enough to believe it would create a multicultural utopia. Those people were more clever and more cunning than that. They knew it would always lead to a clash of civilisations, as prophesied by Samuel P Huntington. And their plan is working out, just as intended.

Ask yourself the question that Cicero recommended over two thousand years when investigating a crime: cui bono? Who benefits?

One of the tricks our enemies have played is that they hacked our post-Christian universalism and high-trust altruism to make us believe that the whole world is just like well-off, nice white people. We let our kids be radicalised on campus and by the TV to believe that not only was the world just like us, but we owed the world due to the racial sins of our forefathers. These kids grew up to become the effete, virtue-signalling degenerates who run our institutions and who are just itching to open the floodgates to a world of people hungrier and more savage than them. And we’ve seen the results of that.

But the people who came here were just weapons, and those weapons were in the hands of an internationalist cabal hell-bent on destroying us as part of their cult’s utopian vision for global domination. Little five year old boys in Christchurch didn’t mastermind this situation. They’re not our enemies.

They were just people. They might not be people from a group we like, or a group we think should be in New Zealand, but they were people created by God just like you and me. Little kids. Grandparents. Someone’s sister and brother. Normal, everyday human beings. And now some of them are dead, and there are young Muslim men in Western Sydney, southern Brisbane or northern Melbourne who will see the news, see the jubilation from many on the right on social media and plot revenge.

And then some of our people will die.

And what Senator Anning said was right. When there is a revenge attack by a Muslim in Australia, the left will give them a free pass. It will be a mental health incident, and nothing to do with Islam. 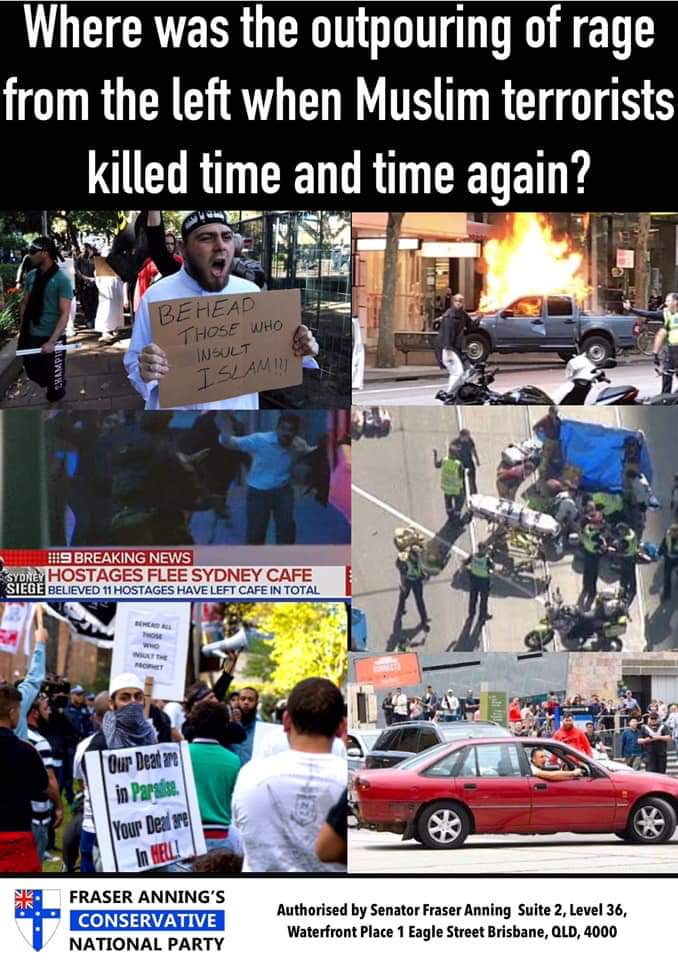 Have you ever heard a politician respond like that about Islam after a terror attack? Of course not.

Because in Oceania, white people loving their heritage and wanting to maintain their identity is doubleplusbad wrongthink. 2 + 2 = 5, globohomoism is IngSoc, David Duke is Emmanuel Goldstein and Q&A is your weekly Two Minutes Hate against all things white and Christian and moral and male.

The inversion of society has been achieved, and now lies are the truth and good is evil. And it makes good men angry, and the elite know that, and use it against us.

Just as they will use Friday’s events against us.

It was inevitable though that an attack on Muslims would happen sooner or later. Anyone who follows conservative mainstream or alt-media has been subjected for years to a constant stream of anti-Muslim propaganda. Coincidentally enough, ever since 9/11, and America’s war on terror against Israel’s neighbours began. You know, the war that created the exploding rapefugee crisis in the first place.

Oops. I forgot. You can’t say that. It’s hatespeech.

What isn’t hatespeech though is attacking Muslims. That’s pretty much the business model these days for anyone in the alt-media who wants a sizeable platform and the money, fame and status that come with it.

Because Muslims run Freemasonry and the Federal Reserve.

Because dressing like a Catholic nun means you can’t love freedom or something.

But pointing out that the alt-media is Zionist-controlled is just a paranoid conspiracy theory, of course. Even when there’s a clear money trail from Zionist backers in Australia and the US to your favourite anti-Muslim Crusader. 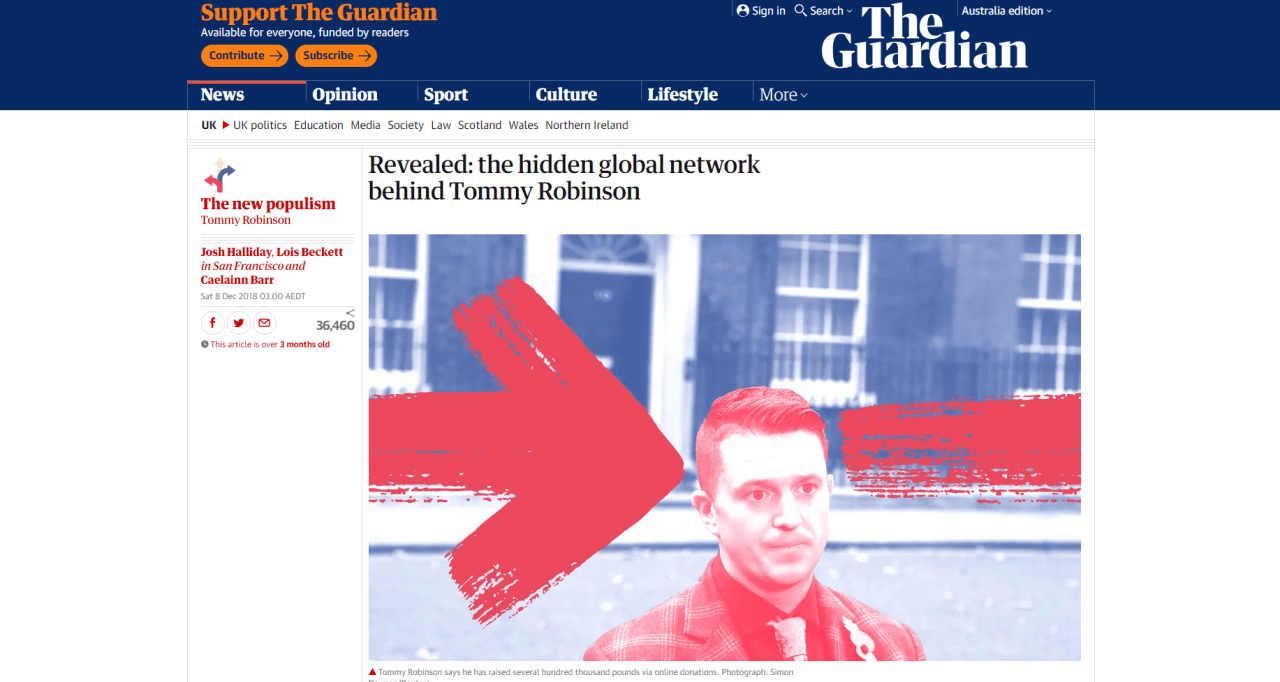 Even when alt-media celebrities say, “I’m a Zionist… Fuck Palestine”, while high and drunk af.

Hilarious. Palestinians. What a bunch of losers!

Torment of a Gaza Palestinian child by Israeli poachers who steal land. Now tell me as a Jewish person with your history would you justify this please. pic.twitter.com/tv4njEr3Q1

Wouldn’t you rather be a winner, and be rich, and well-known?

You wouldn’t want to be a loser, would you?

“I am proud to be the first *Shia* Muslim Imam to pay his respects at Auschwitz. The Jew is NOT my Enemy.”

AJA is pleased to build friendship and collaboration with @Imamofpeace

“It’s better than a burqa!”
AJA President, Dr David Adler, met with Sen Pauline Hanson, leader of One Nation, in her Parliament House office and presented the pin which she put on and wore into the Senate. pic.twitter.com/wzyWxVsMXl

You’ve got to go along with the Zionist agenda to pit Muslims and Christians against each other. If you don’t, well, you certainly can’t come to Australia anymore.

Infowars, Paul Joseph Watson and the Zionist (and anti-Muslim) Perspective (er, on everything) https://t.co/ZDVcBCppSI pic.twitter.com/saQyLDOvpl

And all of it, all of this fomenting of hatred and resentment, is buttressed by Christian Zionism among evangelicals, the Zionist capture of the Christian voting bloc in America and AIPAC’s control of both sides and all arms of the US government.

With @PastorJohnHagee in Jerusalem, moments before the opening of our new US Embassy. #History pic.twitter.com/9cfsyMOYZy

Nancy Pelosi: “If America crumbled to the ground, the last thing that would remain is our support for #Israel.” #AIPAC #ilhan pic.twitter.com/3DyF5CjwA5

You won’t hear that from your favourite alt-media celebs, however. They know that covering that other Satanic religion in the Middle East is career suicide.

This fight that we have is not against flesh and blood. It is not against people. It is against the toxic and destructive belief systems, religious and ideological, which animate people to destroy goodness and advance wickedness in the world. It is against a ruling elite who remain unaccountable and obscured from public view, but who use their control of finance, the media and politicians to push a dark vision for humanity.

And yes, a core part of their agenda is balkanising white countries, eliminating Christianity and destroying the West.

And no, it’s not ‘the Jews’ any more than it’s ‘the Muslims’. This is not a struggle of races, although our enemies would like for us to buy into the race war mythology and shoot little kids in the street. The more chaos, the more rage, the more blind violence, the easier it is for them to obscure their agenda. They hide in the darkness, and fear the light.

Be the light of the world. Have nothing to do with the fruitless deeds of darkness, but instead expose them. And remember, our struggle is not against flesh and blood. It is against the rulers, against the authorities, against the powers of this dark world and against the spiritual forces of evil in the heavenly realms.