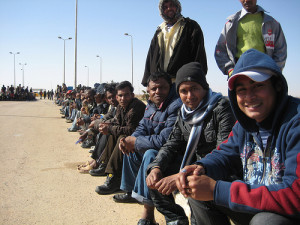 A ten point plan to resolve the crisis – for those migrants who are not part of the formal, planned migrant intake at the very least:

– Family reunification of asylum seekers to be cancelled – this will act as a deterrent and reduce the numbers of migrants to a maximum of those who physically make the initial illegal border crossing.

– Migrants who commit serious crimes against the state to be deported to their country of origin, even if their safety is at risk – this should act as a deterrent.

– Reinstate border controls. Freedom of movement will not be threatened, only illegal movement across borders should be hindered – this should act as a deterrent to the migrant trail and politically force upstream pressure onto the downstream destinations.

– Instigate psychological profiling of asylum seekers. Psychopaths, violent, unstable, sexual predator, paedophile or radical diagnoses should result in deportation to the country of origin. This will act as an effective preliminary screening process which will remove instability from the migrant population, and reduce the cost to society.

– The asylum seeker must pledge allegiance to the laws and customs of the host nation, (including age of consent, marriage, civil law etc). Expressions of fealty to laws other than those of the country in which one seeks asylum will result in deportation to the country of origin. Subsequent contradiction of this pledge, in words or actions, will lead to deportation. This will encourage integration with the host society.

– A two child policy will be implemented on migrants. This will match (exceed) most native populations and result in simplified integration.

– Native language literacy is a pre-requisite along with integration courses. Failure to comply will result in reduced benefits. This will encourage native language proficency and integration with the host society.

– Willing and deliberate illegal activity to reach the country of asylum will be prosecuted. This will discourage illegal entry activities, compliance with the laws of the land, and establish a precedent that crime has consequences. * Any detention will require productive labor.

– Migrants will work for any benefits they receive. While having the cases processed or while waiting to secure paid work, migrants will work in government labor initiatives, (farm work, manual labor). This will offset the cost of housing migrants, provide a benefit to society, and enforce a work ethic.

– Force new migrants to drink a beer and have a pork sausage at a welcome bbq.