Alan Jones was onto Mathias Cormann prior to him finishing off Malcolm Turnbull. Alan knows when there’s a nigger in the woodpile.

Just when it seemed that Alan was going to go full madman, however, his Boomer gene reactivated and he cucked. As always.

Yesterday, I broadcast a phrase that was inappropriate.

I accept not only was it offensive, but the criticism is legitimate.

Radio is a live medium and we all make mistakes.

This was a mistake and I have no difficulty in apologising. pic.twitter.com/X6lYpmmbYF

When will these cuckservatives learn that you never, ever, ever apologise dammit?

Have you learned nothing from the last two years Alan?

When you give a crazed, crying lowlife a break, and give her a job at the White House, I guess it just didn’t work out. Good work by General Kelly for quickly firing that dog!

Maybe the testosterone ain’t what it was back in the day. Oh well.

Whether there was a nigger in the woodpile is contested. The much greater problem is that the woodpile of Australian politics has been utterly corrupted and destroyed by self-serving termites like Turnbull, Morrison, Frydenberg, Bishop and all the other fake conservatives who have conspired to prevent the people having a real voice in Australian politics.

The money power long ago took control of our political system. All of these phonies serve a faction of the globalist oligarchy, and see these shadow powerbrokers as their true constituency. Whether it’s Julie Bishop’s whoring for the big mining interests here and abroad, Turnbull’s thrall to international banksters such as Goldman Sachs (at which he held a senior position prior to politics) or Josh Frydenberg’s mysterious allegiance to forces that don’t exist, these people don’t serve us. They serve the oligarchs, and themselves.

I don’t know enough about Peter Dutton to know whether he’s such a maverick that he isn’t owned somehow. I doubt it, however. We know though that Soros certainly didn’t want him getting the top position.

The theme which ran through their ABC’s coverage of the palace intrigue was bafflement. None of them could get why this was happening.

Even Laura’s tingle couldn’t figure it out. According to Laura, these loony RWNJ’s who signed the petition to challenge her bestie Moishe Turnbull only did so because they were stuck in the ‘right-wing echo chamber’ of Sky News where unhinged presenters ‘rant and rave’ instead of following real news like real people do.

These insiders are baffled because their entire framework for understanding politics, culture and indeed reality itself is rooted in a dead paradigm. They just don’t know it yet.

The pitchforks are being sharpened across the nation, Laura, while you tell the great unwashed to eat political correctness.

You are baffled now. Soon, you will be horrified.

Moishe Turnbull gave an address prior to the party-room vote that you’d expect from a far-left globalist apparatchik of the money power. Cherry-picked from his speech:

Moishe, the focus is on the 25 million. That’s a large part of what we’re pissed off about. Dutton’s power base grew from his mild opposition to infinity brown ‘Australians’.

What a good little socialist puppet you’ve been, Moishe. The failure of the conservative insurgency against the progressive fake right running the Liberal Party shows that there is not a major right-wing party in Australia. The role of men like Moishe Turnbull is to make sure one never arises.

So who is Scott Morrison then? Apparently SloMo is a born-again believer, which is a good start, although the body of Christ is so riddled with deception and idolatry these days it doesn’t mean what it should.

Is he a nationalist, or even a conservative?

From his first speech as PM:

“Whether you arrived 10 generations ago or 10 minutes ago, what unites us is we’re all here to have a go.”

So he’s a Gen-X universalist evangelicuck who worships at the altar of neo-Babelist globalism. Yay.

Scott, if Wing Hing from Beijing is just as Aussie as us descendants of convicts, pioneers and diggers, then there is no such as Australia. If you have the Holy Spirit in you, SloMo, you would know that and not be afraid to say such truths.

God made the nations to thwart Satan’s original plan for global dominion at Babel. Any attempt to erase the nations serves the devil, and you have betrayed your nation for power by mouthing such lies.

Globohomo idealism is Satanic, SloMo, and God hates it. Psalm 2 tells us that God laughs at the foolish kings of the world plotting to overthrow His law just prior to the return of Christ in power. You are now one of those foolish kings, SloMo. You are standing against the will of God by submitting to Satan’s globalist plan.

What does it benefit a man to gain the whole nation but lose his soul? Look at Moishe Turnbull now. Is it worth it?

SloMo is also pushing neoliberal talking points, despite the people of the West roundly rejecting this empty cult of technocratic nihilism. Also from his first speech:

“We believe in choice. That’s what unites us as Liberals.”

But we all shop at the same place.

This is what three thousand years of Western civilisation has culminated in. Unity in hedonism. Purpose through consumption. A cult of meaningless libertinism and nihilistic individualism.

We don’t need a Dutton.

We need a Salvini! 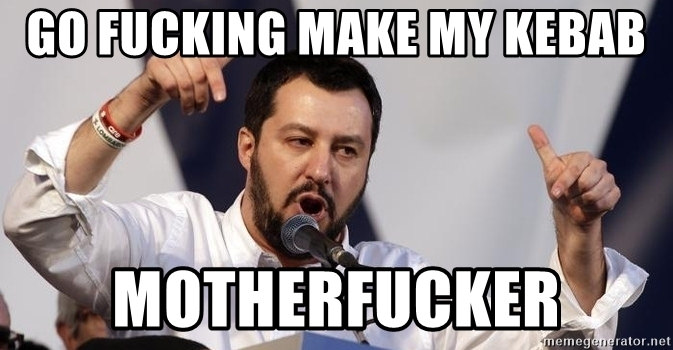 The net effect of all this insider intrigue is to further erode public faith in the system as a whole, which is a win for the nation. There is no salvation for the people of this country within this current system. It is entirely compromised and completely corrupt. We need a reboot.

When you’re watching journalists talking to and about politicians on TV you’re watching rich people acting in front of you, the great unwashed, to ensure that you continue to maintain faith in the system that farms you. That’s their job, and your job is to keep watching.

If you’ve lost faith, and most of you have, liberate yourself and turn that damn TV off. If we stop listening, the mind control stops working.

Then we can get started burning this nigger woodpile to the ground.