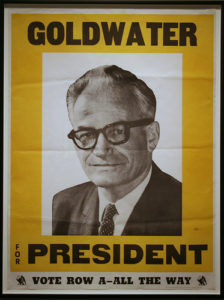 Have you ever heard of the Goldwater Rule? There is no need to be concerned if you have not, unless you happen to be a psychiatrist practising in the US, in which case you are required to understand and comply with the American Psychiatric Association’s Code of Ethics. Section 7.3 of the Code states, in terms that are wholly unambiguous, that it is unethical for a psychiatrist to offer a professional opinion about the mental health of a public figure unless he or she has conducted an examination and has been granted proper authorization to make the statement. The rule was part of the first edition of the Code introduced in 1973 and its genesis lay in a controversy during the 1964 presidential election, when a magazine sympathetic to Johnson polled psychiatrists and then published an article that questioned the mental health of the Republican nominee Senator Barry Goldwater.

It hardly seems necessary to say that opining on the mental health of a person who has not consulted the psychiatrist, and whom the psychiatrist has not examined, and whose consent therefore has not been obtained, is utterly irresponsible and without question unethical, although to put the matter beyond any doubt the Goldwater Rule was introduced and has remained part of the Code ever since. It really isn’t possible for any psychiatrist that is currently or has recently practiced in the US to say that they are not aware of the Code, or the Goldwater Rule, which can only mean that the psychiatrists among 35 authors of an open letter to the New York Times that questions the mental health of the President have quite a bit of explaining to do, possibly before a disciplinary body. The letter, which is as an insidious piece of character assassination as you are ever likely to see, does the very thing that is expressly prescribed as unethical by the Goldwater rule, and concludes with the following:

‘ … We believe that the grave emotional instability indicated by Mr. Trump’s speech and actions makes him incapable of serving safely as president.’

The letter is the latest in a constant procession of nasty swipes at the President questioning his mental stability. While we can comfortably, and even derisively, ignore the cartoonish medical opinions of the myriad and wholly unqualified journalists, social workers and other assorted political flunkies who have sunk to such contemptible conduct, the psychiatrists who have put their name to the letter should not receive the same latitude. Writing such a letter in flagrant breach of the long-established ethical boundary contained in the Goldwater Rule is conduct worthy of investigation and sanction. When the statement is made for the purpose of politically stigmatizing the person concerned, the breach is egregious and squarely calls into question whether the professionals concerned can be trusted to responsibly practice medicine.

The MSM who gleefully report the unethical musings of these psychiatrists, and the unqualified opinions of the others, are ever keen to remind us of the ethical boundaries of journalism, usually in a vainglorious assertion of their own credibility, although you would be hard pressed to find any evidence of it in their conduct. It seems highly unlikely that the New York Times was not aware of the Code or the Goldwater Rule when it received and chose to publish the letter, and it is probably safe to assume that the temptation of yet another nasty slur against the President was simply irresistible to doyens of professional journalism and their much-touted impartiality.

The attacks on the President claiming he is mentally unstable are a new low, even in the context of one of the most vitriolic elections in American history, and the vituperative defamations of people who constantly tell us they represent the moral and intellectual high ground. Heaven help us if they do.