Last Saturday The Daily Caller, one of the largest news sites in the US, fired Opinion Editor Rob Mariani unexpectedly. 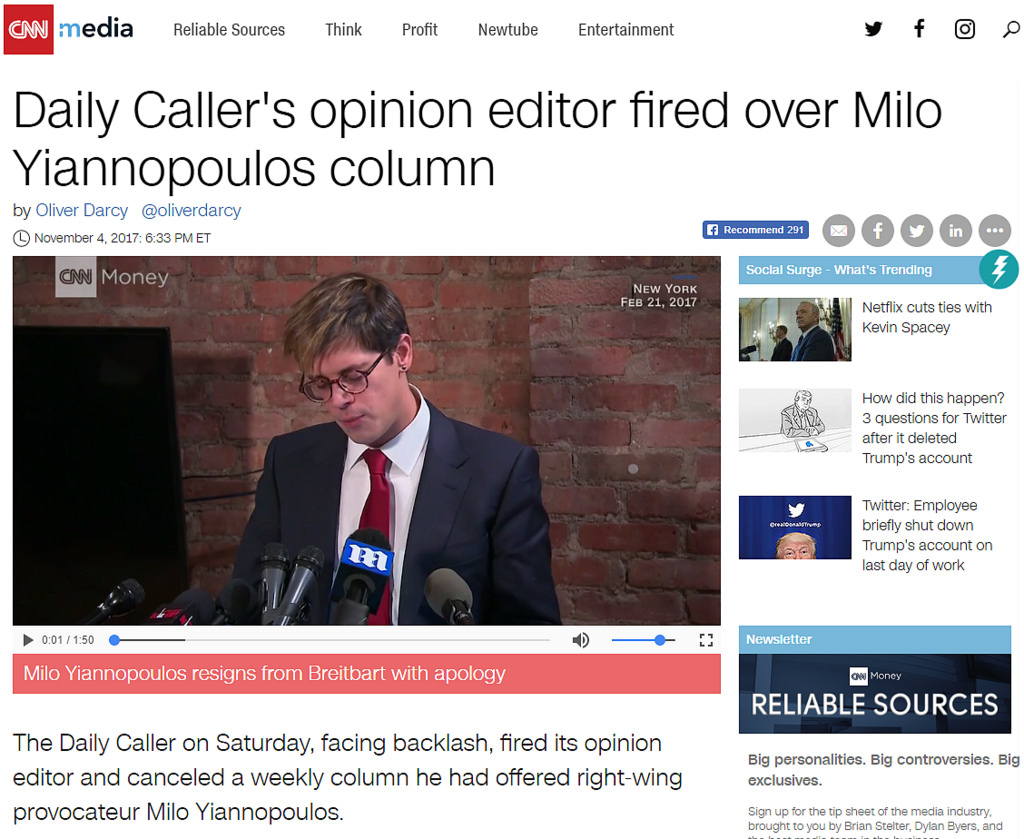 No, he wasn’t accused of sexually assaulting a pot plant while drooling at a young intern ten years ago. He published an opinion piece by Milo on the revelations that Kevin Spacey is a serial boy molester.

According to Mariani, his firing was demanded by a mob of angry queers pissed off that Milo pointed out the well-known pattern of older poofs grooming boys and young men for sex.

I think it had to due with Milo mentioning the culture of sexualizing teenage boys among gay men. 1/2

In the interests of full disclosure, I know Rob Mariani. He was the Opinion Editor who gave me a break by publishing my pieces at The Daily Caller during the 2016 presidential election. I wrote an op-ed for them every two weeks for about seven months, until I decided to focus on helping build the anti-globalist movement here in Australia instead. He’s an utter professional, and has done a great job driving traffic to the site and increasing its influence.

None of that mattered, though, when an outraged mob of politically-correct and politically-connected frightbats demanded vengeance for someone saying something true they didn’t like.

This is the only strategy left for the postmodern left to shut down the rising tide of truth coming from the disaffected, the old-fashioned and the realistic. Rather than engage with ideas, debate, and submit their dogmas to the refining fire of honest argument, the left use mob power and hysteria to ‘no-platform’ dissenting voices.

That the multinational corporations who control the internet are participating fully in this agenda shows us whose interests left-wing, globalist ideologies ultimately serve.

If you see someone sharing snopes.com on social media, they’re either a deep state shill or a low-agency, Gen X loser. Or both.

If you trigger leftists on social media on a regular basis, you can expect to get zucced as a matter of routine. Good luck trying to open new accounts, as Facebook and Twitter are now using IP identification to prevent a blacklisted individual from creating social media accounts. You become an online unperson.

Not for anything illegal, though. Just for being offensive.

The upside to getting permazucced, though, is more time to read Julius Evola, do bagwork and become even more excellent. 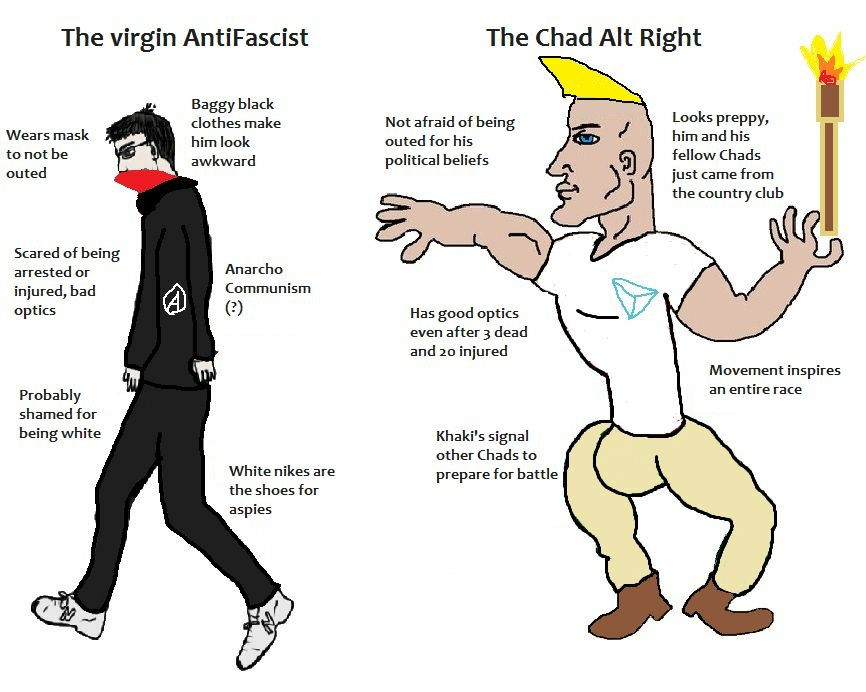 The far left authorities have used the Charlottesville pedestrian cardiac incident to crack down hard on sites and individuals they don’t want heard. The most prominent example has been Andrew Anglin’s Daily Stormer getting chased around the world and shut down every few days, although there are other examples as well. The case of the Daily Stormer was the first time that a website has been arbitrarily shut down despite doing nothing illegal and not violating any DNS provider’s terms of service.

Even if you don’t like the material on The Daily Stormer, you have to ask yourself: What is so dangerous about that site that it warrants such a totalitarian response?

Any why is so much pornography, terrorist propaganda and obscene violent material on the internet OK, but a guy who uses the ‘n’ word not?

How did our morals get so upside-down?

The Puritans had their morality right though, and the society those beliefs created formed the foundation of several centuries of Western global leadership. The narratives taught to kids today and spread through the corrupt entertainment industry are thoroughly unfair on the Puritans.

If you believed Hollywood, you’d think the Puritans burned thousands of witches in the Salem witch trials. They didn’t. They hanged about 20. That’s six fewer dead than the recent massacre of Christians at a church in Sutherland Springs, Texas.

But in the current year, Satanic witches are poor victims and Bible-bashing Christians are evil oppressors, right? They deserve what happens to them.

What we are seeing with the political persecution against anyone who disagrees with cultural Marxism today is a true witch-hunt. The left have been mobilised by a corrupt establishment terrified of years of corruption and illegality being exposed. Whether they realise it or not, the far left mobs baying for ‘Nazis’ to be hounded out of public life are serving the interests of the deep state swamp.

Decadent and deluded by false historical beliefs, the postmodern mob shrieks when they hear truths which challenge their worldview. This is how democracies behave just before the end. It’s why the Athenians put Socrates to death.

Just as in late Athens our elites are corrupt and self-serving, our philosophies are debased and our morals are inverted. Point that out, though, and you could lose your job or worse.

The leftists getting so outraged by ‘trolls’ online believe that they are the inheritors of the Enlightenment; rational, reasonable individuals who hold the pursuit of truth as the highest virtue. They tell themselves that they are the defenders of science against superstition; open-minded individuals with history on their side.

They’re not. Hearing the simplest fact about race, gender, culture or religion reveals that. They’re not the poor witches at Salem, suffering for challenging the status quo.

In the current year, they’re the Puritans. 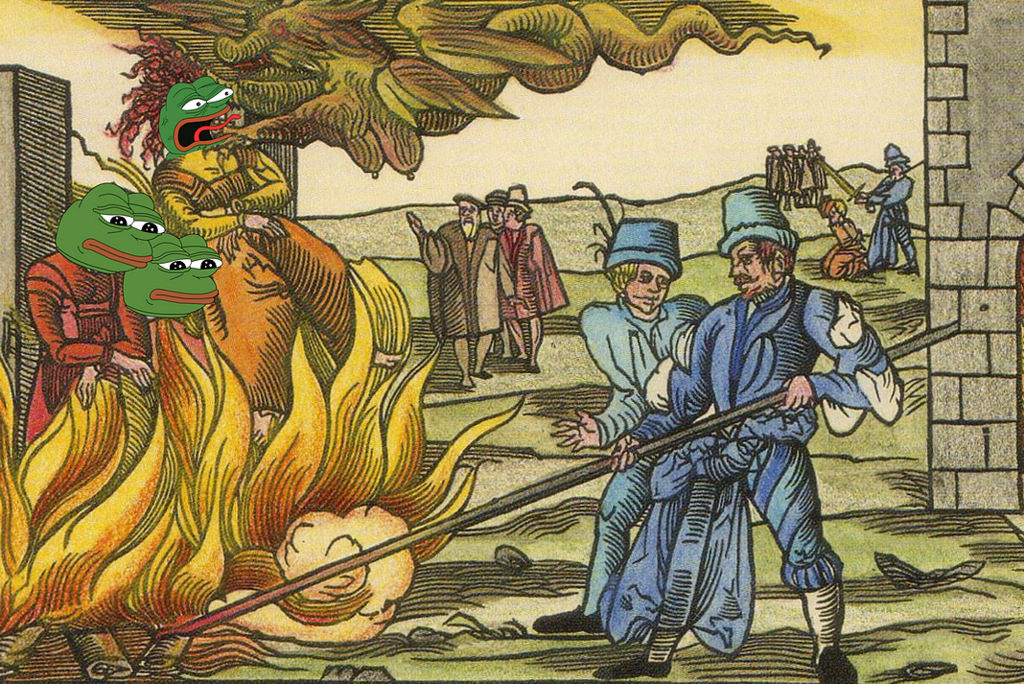