Sometimes you just have to feel for someone, even if that person richly deserves their comeuppance.

As I and others on XYZ have reported recently, a survey commissioned by the left-wing polling company Essential indicated that a plurality of Australians are not at all overjoyed by the prospect of further Islamic immigration.

This came as quite a shock to some people in the establishment, even to those who make their living or pad their profile telling everyone how evil and racist white Australians are.

Our highly-paid racial discrimination Commissar, Tim Soutphommaswhasisname was all over the news urging calm amongst the educated classes, assuring them that the evil Bogans from the suburbs and the bush didn’t REALLY dislike Muslims; they had just been misled by news reports that kept mentioning Pauline Hanson and reporting Muslims doing horrific things around the world.

Presumably, Tim was implying that journalists should just try to be a bit more vigorous in their self-censorship so that the uninformed proles don’t get quite so much of the information that makes them so uninformed.

I’m sure that will fix everything. After all, claiming every recent lone wolf terror attack as a sudden onset of mental illness has been a roaring success for inter-community relations, as well as for the credibility of the western world’s media.

This is the advice we pay Tim three-hundred-odd grand a year for folks. Clearly money well spent.

But Tim Sout-thingamibob’s reaction was predictable; I’m pretty sure the man has a standard press release template on his taxpayer funded computer where he simply fills in a few empty fields before shooting it off to the supplicating hacks that use his quotes and print his garbage.

One other reaction now shared across the internet was not quite as boilerplate.

If you haven’t heard of the national treasure that is Mariam Veiszadeh, then you are clearly as uninformed as those benighted rednecks that had the sheer effrontery to vote One Nation.

This heroic heroine fled Afghanistan with her family at the age of four in 1988. They spent three years country shopping in India, (a safe country), the Czech Republic (a newly freed safe country) and Germany (a rich safe country at that point accepting almost anyone who claimed asylum).

Of course none of these were good enough and the family chose to move to Australia where, despite their travels across a multitude of safe havens, they were granted Asylum in 1991.

Oh what a boon that has been to us.

If it weren’t for that momentous decision taken by Mariam’s parents, Australia would not only be deficient to the tune of one corporate lawyer (Mariam’s day job), but also one publicity-whoring minority activist.

What a terrible tragedy that would have been.

Mariam has spent her adult life attempting (in her own words) to:

“..promote a cool consensus position on Muslims in Australia..”

Which mostly seems to consist of doing apologist interviews to fawning journalists every time her community inexplicably faces a “backlash” while sporting a colourful hijab and complaining that nasty haters online ask her to kindly get the hell out of their country.

I’ve met girls like Mariam before and I always suspected she was at least partially putting it on.

Not that she was making up internet abuse, far from it; go on Twitter and push some buttons, and regardless of your ethnic or religious background you can amass quite a respectable tally of death threats in no time flat. For some people, the fun of doing so is the entire point of the format.

What I mean is that I suspect Mariam grew up as the token secular Muslim in a middle-class milieu. By her own account, she didn’t even start wearing the hijab until she was about twenty-three.

It’s not too much of a flight of fancy to suspect that she has been coddled and given extra “brown skin” credit her entire life. Surrounded by an upper-middle-class world, the intrusions of September 11 and the Cronulla riots that she credits for her political awakening were almost certainly not scary moments of persecution but tools that a young girl could use to make herself special, to get herself more attention.

If you have heard anything about her this past half decade you know that an upbringing such as this would be entirely consistent with the way Ms Veiszadeh has chosen to live her life.

Even while she was screeching about Islamaphobia to a dozen sympathetic journalists while posing for flattering headscarf headshots, I don’t think Mariam ever truly believed the picture she was painting of a bigoted hell-scape, where the decision to adorn her head in cloth was a painful choice wrought with anxieties about her safety from the Islamaphobic hordes. 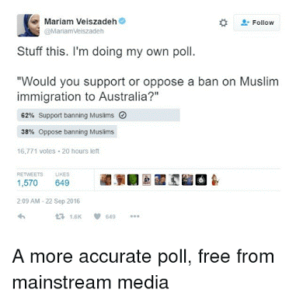 This would explain why, after the Essential poll came out showing 49% of Aussies wanting a ban on future migration from Muslims, her reaction was shock and disbelief:

“Every 2nd person sitting on the bus I was on this morning would ban people like me from coming here..”

So she decided the poll must be wrong; after all, 1000 people is a small sample size (even though Essential did the poll twice just to be sure). Surely a larger poll with a sample taken from amongst her Twitter followers would help to clarify matters.

After all, she was Mariam bloody Veiszadeh! Ranked in the top 0.5% users on social media! Selected by Elle Magazine Malaysia as one of 12 women who were helping “change the world” alongside the likes of Michelle Obama and Angelina Jolie! Topper of the Buzzfeed list for “12 Muslim Australians Who Crushed It In 2014”! Just last year awarded Westpac’s “Woman of Influence” Award for 2015 and the “Role Model of the Year” and “Woman of the Year” at the 9th Australian Muslim Achievement Awards!

Surely a little ego-massaging by getting her thirty-three thousand fawning Twitter fans to virtue-signal about how much they LOVE Muslims like her on a poll wasn’t too much to ask?

After more than 46,000 votes, a whopping 74% of respondents said they’d support a ban on Muslim immigration.

Mariam then proceeded to call all those who voted xenophobes, declared victory anyway, and went off to sulk.

Of course, her poll was hijacked by both left- and right-wing activist elements online, but that was the point of the poll in the first place.

Mariam just assumed, from inside her nice bubble where she has been handled with kid gloves her entire life, that the left-wing activists were both more numerous and more eager to show support for the open-borders invasion of the West that is upon us.

She seemed even more shocked and saddened than before when this turned out to not be the case.

I don’t think Mariam is a particularly bad person as far as shameless leftist publicity whores go; but she’s far more representative of ivory tower upper-middle-class white progressives than anyone from her own community.

The saddest truth is that, beyond her utility as a means to virtue-signal their social superiority, I don’t think most of those pale-skinned leftists who have been pumping up her tyres all these years care much about Mariam at all.