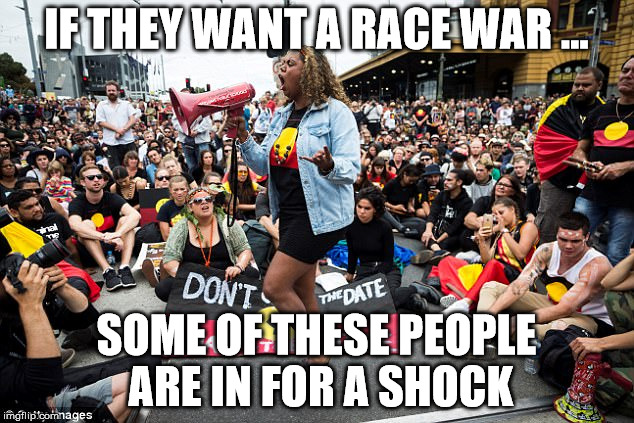 A common feature of underdeveloped and clannish societies are feuds that can go on for hundreds of years across many generations, with nobody still living really understanding what they are fighting about. Western civilization, and particularly English cannon law, put a stop to this destructive practice by ennobling the radical idea that sons should not be responsible for the sins of their fathers.

This core tenet of the success of our civilization has become endangered in recent years with the systematic rise of identity politics through cultural Marxism, socialism, and progressivism. Because you are white you are supposedly guilty of having ‘privilege’ and thus you must atone, not for your sins, but for the unproven and undocumented sins of your fathers.

This is an extremely dangerous development and one which is rife with unintended consequences for even the most well intentioned.

In the above meme, the woman speaking is aboriginal activist Tarneen Onus-Williams, (cultural appropriation of prog hyphenated name), who organised and spoke at an “Invasion Day rally” that took place in Melbourne on Australia Day. In her speech she called for Australia to be “burned to the ground” which she and her fellow members of WAR, The Warriors of the Aboriginal Resistance, meant literally:

“WAR will not rest until we burn this entire rotten settler colony called Australia, illegally and violently imposed on stolen Aboriginal land at the expense of the blood of countless thousands, to the f. king ground,” the indigenous rights group wrote on its Facebook page.

“WAR does not recognise Australian citizenship or the national legal system and wants to return the continent to the rule of “Aboriginal law”.

As abhorrent and incoherent as these views are, and how traitorous the individuals saying them, I don’t entirely blame them for arriving at this point in their lives. While they obviously need to take a lot of responsibility for such drivel, some of the responsibility for this has to lie with those who have had an active and not so active hand in fermenting the hate of the white man over the last 40 years.

This fault lies squarely at the feet of governments, social workers, the ABC and many other news organisations, bureaucrats, and social planners who have sold aborigines the lie that they are hard done by through no fault of their own and that they have entitled historical grievances.

But the first literal step that ordinary Australians took in aiding this betrayal of our Western values was in 2000 when an estimated 300,000 virtue signalers walked across the Sydney Harbor bridge on what became known as ‘national sorry day’. It was cemented a few years later when then prime minister Kevin Rudd made a formal apology to aborigines on behalf of all Australians, an apology that should never have been made.

If you say sorry for something that you yourself have not done then you are declaring that you are responsible for the supposed sins of your fathers. As far as race relations go, no bigger can of worms can ever be opened. The virtue signalers assumed that their grand gesture would prove their own goodness over their backward forefathers, when in reality it merely opened the gates for an unending and ever increasing tide of racial disharmony.

There was no national racial disharmony of consequence before these events took place. The disharmony and hatred started as a result of those very same events.

Ten years after the formal national apology by the Australian parliament we now have aboriginal activists openly plotting to destroy that same parliament and everything that goes with it. And in the process we have lost a critical component of Western civilization; that the sins of the fathers shall not be borne by their sons.

Our future sons will have to deal with this mess, a mess that we created out of a narcissistic desire to be seen to be good. For nothing good comes from the disassociation of your cultural heritage and the abandonment of crucial principles that bind a nation and its people together; the desire to live together, the desire to be free to live one’s life as one chooses, and the freedom to act without judgement from one’s fellow citizens about historical events over which we had no power or agency.

Australia was a nation of people that lived in relative harmony. But the seeds of its demise have been sown and the burden will be borne by untold future generations.