Any time in history, if you look with honesty: you will find that people naturally shift towards living in homogenous communities, those who share the same cultural and religious values and the same ethnic/racial heritage. For the modern man to look back through history – even the history of Australia – we rarely ever ask the question: Why?

If you ever ask a university professor or a Marxist, they will just say “xenophobia, prejudice, racism….” The list of buzzwords they use goes on – this is because they naturally want to shut down any debate about the question of nationhood and community, because it is the most severe threat to the internationalist desires of the modern left. Reality, and testimony from the past tells us that people prefer to live in these ‘homogenous’ societies because it produces the most fervent sense of common identity and belonging possible as the people share the same heritage and physical appearance, and it produces the best chances for maximum social cohesion as there is no petty day-to-day arguments about differing fundamental moral and cultural values.

“Nationalism is necessary as the interests and feelings of difference races and cultures are too discordant to be harmonised under one single central Government.”

This was his argument in 1893, in the lead up to the federation of our country Australia, a very true statement – his book “National Life and Character” is a must read for anybody interested in Australian history; he notes how the members of a community must share the same culture and ethnic heritage in order to achieve the healthiest possible state for a community to exist in, the science – now shows us this is the case,[1] whether you like it or not.

Today in Australia, it seems our concerns with immigration are one of two things; Economic and Religious. It seems Australia is very awake to the concerns it should rationally feel towards Islamic immigration, as they know well that with large Islamic immigration comes enormous unwanted racial tension and higher risks of terror attack. Australia is also concerned about large immigration because of housing shortages and already high unemployment in entry-level fields; in 2015, The Western World was given a baptism of fire, facing the reality of the enormous out-flow of migrants and refugees from non-western countries, it is now at a precipice in which it must decide what to do about this refugee crisis; and just as the Marxists desire – the average Australian thinker has never considered the question of community cohesion and common identity, he’s only thought of Islam, housing shortages and unemployment. 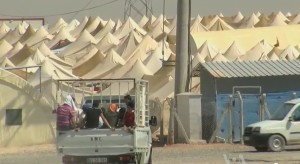 The Syrian people, no doubt in a terrible plight – it is a disaster and a cruel tragedy that has befallen their people, but we must recognise – whether the Syrian Refugees have the best intentions or not, are Christians or Muslims, are Pro Assad or Anti-Assad –at the end of the day, they do not belong to the European racial-cultural community that already exist in Australia, and to import these poor people, of a different cultural, religious heritage is to drive a stake through the heart of the Australian Community, as we will be continuing to dilute the Australian people more and more in their own towns and cities.

It is not that we particularly dislike these people (maybe some do) – but the argument must be made that we mustn’t sacrifice the entire future of Australia’s social cohesion and common identity by admitting large quantities of people from entirely different cultural identities and racial heritage, as they simply cannot exist as true members of the wider Australian community as the divide of culture, religion and race is too wide to be bridged with “we all bleed red” slogans from the common street communist.

Australians must dig into their roots, find out what Nationalism is really all about, not listen to the hyped buzzwords of the communist rats that roam the streets, but listen to the words of our founding fathers, men like John A. Beasley who said “It is possible to live on the highest terms of mutual respect with one’s neighbour whilst recognising that it would be destructive of all harmony to invite him to become a permanent resident in one’s household.”

Matt is a Nationalist who spends too much time in the national library.