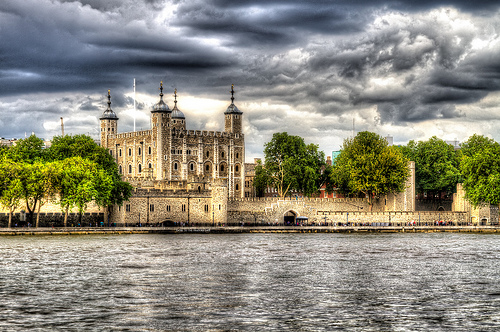 What stands out most about the history of the British peoples is the calibre of its leaders and thinkers, truly great men and women who understood the inherent value of the culture they were exporting to the world. More to the point, they had the courage and conviction to fight fiercely to defend their way of life, and importantly, to never back down.

Individual liberty, property rights, freedom of speech, equality before the law, the free market – all nations in the Anglosphere from America to Australia share in this history and have benefited greatly from these customs, even those nations or peoples that at one time or another were colonised by the British at gunpoint.

But that is no longer true.

The United Kingdom that exists now is but a shadow of its former self, a pale imitation of a democracy, devoid of leadership, stripped of its identity, in thrall to political correctness and operated for and on behalf of special interest groups in the European Union.

Yesterday’s news that police in Leeds had arrested Tommy Robinson on “suspicion of breaching the peace” hit me like a punch in the guts. Given his controversial past, he has risen to a position of real leadership and influence in the country, and his bravery in standing up to and speaking out about the problems with Islam has made him a marked man in a country that targets anyone who speaks the truth. Tommy Robinson is the hero that Leftist Britain doesn’t deserve, and he is being treated as an enemy of the State.

Maybe this outcome was inevitable. The rapid decline of the UK in the past two decades has been staggering.

Nowhere has a government adopted worse immigration policies than in the modern UK, where post-1997, New Labour opened the floodgates of immigration in an attempt to create a multicultural utopia and shore up Labour’s voting base. It is now one of many well-documented failures of Tony Blair’s time in office.

UK authorities have capitulated to a demographic Muslim minority, allowed the creation of Muslim enclaves in several UK towns and cities, and papered over the most atrocious child grooming scandals around the country because the perpetrators were mostly Muslim males, and the victims mostly non-Muslim.

The Welfare State has metastasised into a vast, unaccountable bureaucracy, that subsidises criminality, idleness, drug abuse, single motherhood, foreign migrants and refugees to the tune of billions of pounds each year, rendering vast swathes of the population completely dependent on the State.

The National Health Service is close to collapse, with this piece from The Guardian missing the crucial point that any time the State is put in control of anything, its inevitable failure is guaranteed.

The BBC has morphed into a gigantic state propaganda arm, a censorious body that controls speech and ideas.

Investigative journalism uncovered a massive paedophilia ring, involving multiple celebrities and politicians, with the media found to be culpable in the cover up of an unbelievably sordid and cruel story of abuse and murder over many decades. Details of the case are still emerging.

The UK political system has morphed into a one-party State where both Tories and Labour have vested interests in maintaining their positions in parliament, at the expense of their constituents or the long-term governance of the country. This has never been more evident than in both parties’ lack of conviction to lead Britain in the Brexit negotiations with the EU, with politicians from both sides guilty of a treasonous attempt to stall, stymie and undermine the outcome that the population voted for.

UK law enforcement and the criminal justice system has completely collapsed, subsumed by the directives of Common Purpose to create a new leadership class loyal to a post-democratic society of the sort favoured by the EU. Look no further than Common Purpose for the complete breakdown in law and order in the UK. Like me, many of you likely know very little about this, but I urge you to read this link and make up your own minds.

All of these are reason enough to be cynical about the UK’s future, but it’s in the sphere of free speech that the dystopian future of Britain has emerged the clearest. Whether it be no-platforming of speakers on university campuses, the constant musings in the media from progressive elites about hate speech, the censoring of commentary about grooming gangs, immigration or Islam, the recent barring of entry to the UK of conservative speakers like Lauren Southern, or indeed the numerous cases of police arresting citizens for the heinous crime of posting disagreeable opinions online – I have always maintained that the UK is on the cusp of Orwell’s 1984 police state, but have been optimistic that free speech would ultimately win.

But with Tommy’s arrest and sentencing yesterday, I am for the first time convinced that a revolt will be needed. Mainstream media such as The Independent and The Evening Standard continue to report that this is about a disgraced far-right activist and about the rise of “hate” in the UK, too clueless or dishonest to report on the outrageous abuse of power and double standard on display.

The obvious hypocrisy here is that were this to happen to an activist of a certain ethnicity or religion, the mainstream media would be up in arms. In fact, had the West Yorkshire constabulary been even half as committed to policing the original crime of child grooming in the first place, there would be no reason to report on this crime at all.

But the police, judiciary and media no longer believe in Britain, and no longer represent its citizens. The UK is an authoritarian police state.

The future is staring all of us in the face. 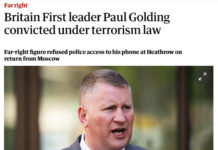