The Australian version of The Spectator has published a piece titled, The Identity Politics of the Lunar Right. Apparently those of us on the Nationalist Right who espouse views that would have been completely mundane and broadly accepted even 30 years ago are now so far on the extreme fringes of society that we inhabit the moon, in a figurative sense I presume. 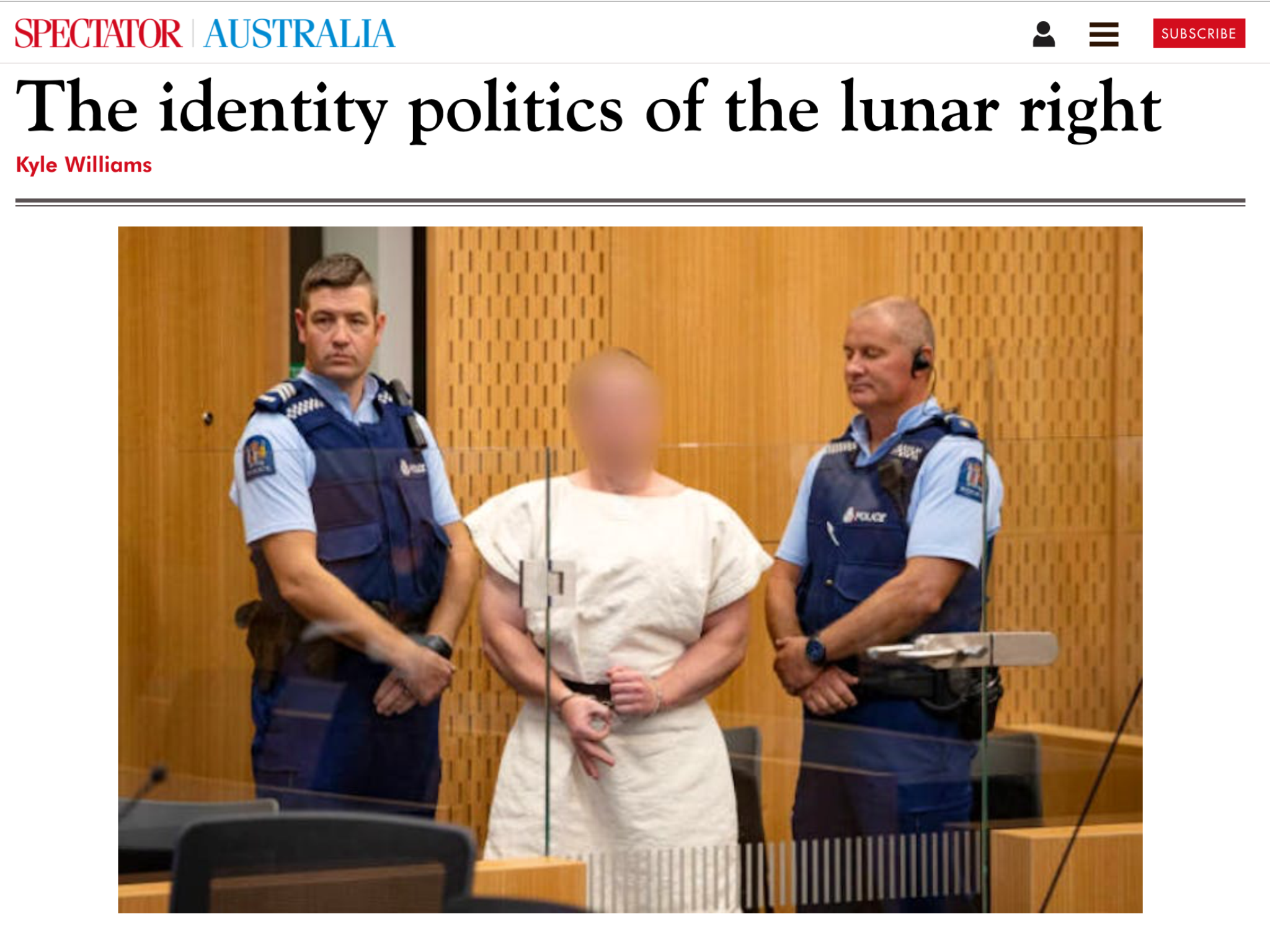 The Spectator has now officially gone full monty cuck, and you should never go that far if you want to retain any credibility at all in the political spectrum of which you claim to reside. The reason for this is not just down to the fact that they have embraced the twin leftist ideological lies of multiculturalism and diversity. Behind all of this moral postulating is what I call the creeping horror of the Boomer generation. The Spectator is now almost solely written for Boomers, and not just any Boomers; conservative Boomers, or as I like to call them, Boomcucks.

Boomcucks are terrified of the consequences of the actions of their generation. In the case of themselves they are terrified of the consequences of their inaction, their collective failure to conserve anything at all of the nation that was bequeathed to them. They failed to conserve the Church, our institutions, the family, the sanctity of marriage, and the right of an unborn child not to be murdered in the womb. For those children that did manage to survive the abortion lottery they failed to conserve our schools, blithely handing them over to the most demented and mentally diseased of their supposed opponents so that today children as young as six are taught about the glories of homosexuality by transvestites dressed as demons. They embraced homosexuality with a level of enthusiasm that caused many of us concern and an unwillingness to be left alone with them in the change room of the gyms at our local clubs.

Because of their terror at being found out, their only recourse is to double down on their mistakes again and again in the wild hope that the chickens will only come home to roost when the Boomers are dead and buried. The Spectator is one of their few remaining mouthpieces and thus they must now trumpet for that which they supposedly once opposed. But like all cuckservatives, they never opposed the left’s ideological march at all. They only wanted a spot at the table and a comfy chair at their club so that they could continue to enjoy the remaining fruits as our nation eroded around them.

Their chief failure was the mass invasion of our nation through alien immigration. Anyone with eyes and a half functioning brain who walks around any of our cities and towns today cannot escape the overwhelming evidence that our nation is no longer our own. Sydney resembles some sort of despotic Hong Kong; a nightmare world from a Philip K Dick novel. Melbourne has become an outpost of India, its public transport crammed with lower caste Indians who crowd together in tiny apartments in the hope that they can bring in the rest of their multitudes of relatives. Lucky enough for the Indians, the remaining natives in Melbourne are easily distracted by a rag-tag bunch of stupid Sundanese youths, (but I repeat myself), whose clown-like antics and scattered crime sprees only go to prove that what we once called the authorities would look gormless in an early episode of The Simpsons.

The Spectator is upset that those of us on the Nationalist Right have noticed what is going on. The Boomcucks last remaining defense against claims that they have embraced the ideologies of the left is that they claim to hold people sacrosanct as individuals. Boomcucks cannot possibly be slaves to identity politics because as far as they are concerned all people are the same and are worthy of dignity. Underpinning this rhetoric is their slavish devotion to the magic dirt theory – anyone can become a Westerner as it’s just a set of values. Never mind that they sold those same values down the river long ago, this is and always has been a gigantic lie. People vote along racial and religious lines, and people are a product of these groups because we live in societies and are thus dependent on each other. Implicit in the Boomcuck’s con is that it doesn’t matter what is the colour of your skin or the religion that you follow, in their happy globalist world we are all the same.

The Boomcucks can enjoy the luxury of this delusion only because our nation is somehow still holding itself together. They may not be interested in race or religion but race and religion will most certainly be interested in them when things start getting hot. This is their wildest nightmare, the granddaddy of them all, and the one that the Boomcucks fervently hope will not come to pass before they die of a comfortable old age.

The Spectator takes a long shot at Senator Fraser Anning in the linked article. Anning is a horrible non-person because he wants to send back all of these incompatible foreigners. But in the scheme of things Anning is a moderate. If men like Anning are not listened to then eventually the ultras will come to power and their solution will have nothing to do with repatriation. The Boomcucks believe that they have made the problem so big that such remedial actions are now impossible. This was always the game plan, but history shows a long and brutal series of episodes that prove the falsity of this notion.

But The Spectator also took a direct shot at me as well. They are deeply concerned that I could not find any sympathy for the Muslims gunned down in Christchurch because “they are not my people”. My statement goes to the evil and traitorous black heart of the Boomcucks’ betrayal. The globalists want us all to be the same; interchangeable cogs in their crony capitalist machine. In this system there is no place for the individual sovereignty of nations. And by nation I refer to the biblical understanding of what a nation is; a collection of people bound together by a common race and religion, not the perverted line on a map idea of a nation.

Saying that they are not my people is an outright defiance of everything that the Boomcucks stand for. They cannot abide such rebellion which is why The Spectator ended its article by claiming that Anning, myself, and others who think the way we do are perpetrators. We are engaged on wrongthink on a profound level, and it is a direct threat to the blissful serenity of old age that the Boomcucks hope to enjoy. It is my goal to see that they do not go quietly and peacefully into that good night.