What you have to remember before you watch this video is that fat people are worthless.

It’s enough to give an Antifa soyboy a boner. Three landwhales who don’t even belong here fighting over something they don’t need. (Going by the accents, nobody in the store appears to belong here.) What are they going to do with all that TP when the water stops? Bet you they don’t own shovels.

Naturally, the authorities are desperate to avoid Boogaloo.

“It’s just bad behaviour by people that are panicking and there is just no need for any of that panic because there is sufficient supplies,” Inspector New said on Saturday.

“There ***are*** sufficient supplies”. Come on teachers of Australia, I can’t edit everybody.

“It’s not the Thunderdome, it’s not Mad Max. We don’t need to do that.”

Think about it. Every pronouncement the authorities have made regarding coronavirus has turned out wrong a few weeks later. They keep retreating to the next fallback position.

Apparently, statewide school closures are not currently necessary in NSW. I give it two weeks max. Do they have any idea how many Chinese people are in Sydney?

The government followed ‘expert’ advice to quarantine at-risk people (ie Chinese people) for 2 weeks before letting them into the country, but it turns out the virus can incubate for much longer. But you know, the ‘experts’ say that is no reason to extend the quarantine period. Wouldn’t wanna be racist.

Our rulers don’t care about saving our lives, they simply want to avoid panic and any threat to the system. But we still have Easter Eggs in every aisle and people are losing it. It’s going to be a lot of fun for people who prepped early and who understand that when the power goes out, we live by new rules.

Anyway, the memes are great. 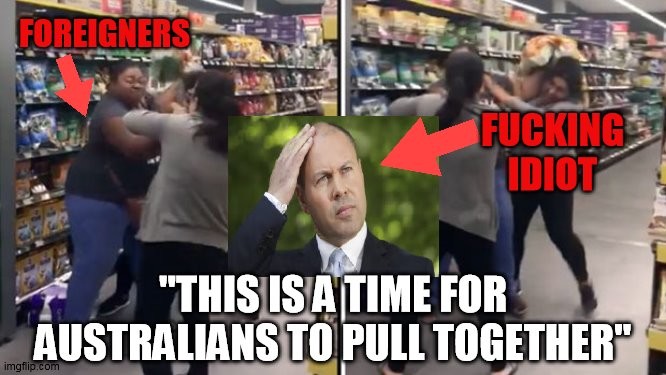 And there is always a Simpsons spoof handy.